This article or excerpt is included in the GLP’s daily curated selection of ideologically diverse news, opinion and analysis of biotechnology innovation.
University of Florida plant scientist Kevin Folta was excluded from a gardening workshop in Gainesville, Florida, where he was scheduled to speak because of a social media backlash orchestrated by anti-biotechnology activists.

The event is scheduled for April 27-28. According to the Organic Seed Alliance, one of the event’s sponsors, the annual Southern Seed School workshop “brings together gardeners, farmers, educators and anyone else wanting to deepen their knowledge of seeds [and] is designed to inspire local growers to improve the food they grow, and increase agricultural biodiversity in North Florida.”

With sessions dedicated to plant reproduction, vegetable breeding for amateurs and an “ask the experts” panel, the event is billed as offering scientists and farmers the opportunity to interact with consumers, inspiring them to develop a basic understanding of agriculture and plant science. The organizer of the seed school, Florida nonprofit Working Food, writes that it works to “….sustain a resilient local food community.” For this event, it enlisted a diverse group of plant scientists and graduate students from the University of Florida in Gainesville to speak at the workshop.

This list of experts included geneticist and former head of the university’s horticultural department Kevin Folta, a vocal proponent of the benefits of genetically modified crops and well known for his science outreach efforts, including the Talking Biotech podcast featured on the GLP. Folta has almost 22,000 followers on Twitter and is well-respected among his science colleagues. In 2016, he was honored with the Borlaug CAST Communication Award, presented annually by the Council for Agricultural Science and Technology for outstanding achievement by a scientist. But Folta was removed as a speaker from the event just a few days before he was scheduled to present after the organizer received a swarm of complaints about Folta’s “baggage” as a biotech expert.

Beginning in 2014, U.S. Right to Know (US-RTK), an anti-GMO advocacy group founded with seed money from the organic food industry, launched a 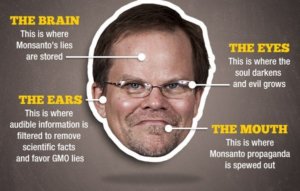 campaign against prominent agricultural scientists who US-RTK said were part of “the Agrichemical Industry Propaganda Network.” These scientists, the group claims, colluded with the industry, Monsanto in particular, to defend their products [GMO crops and pesticides] against public opposition, which US-RTK was in part responsible for stirring up. Of the 40 plus scientists attacked by the activist group, Folta was one of the first targets, and their campaign was relentless, vicious and often personal.

Folta long has maintained that attacks on his character were grossly unfair and based on a few dozen emails, a handful of professional direct interactions with Monsanto over thirteen years, and reimbursement of customary travel expenses by the company, now owned by Bayer, for $719.76, covering travel expenses to speak to farmers in Colorado in September 2014. The University of Florida also received a $25,000 gift from Monsanto to be used at the university’s discretion. It was originally earmarked for an established biotechnology communication program. The money was later returned to Monsanto after publicity about the gift became a focus of controversy. Folta has maintained that he has always communicated information consistently according to his research and understanding as a scientist working for a public institution.

Since your sharing of the event on Twitter, we have received so much back lash and negative attention. Our organization is now being called out and emailed, and our long time sponsors, supporters and mentors for the event are caught in an uncomfortable position they did not ask for…. As you know from our discussions, I truly defend free speech, information sharing, and science literacy, but now realize that the messenger matters, and do not believe that our audience will be able to hear you…

Working Food did not respond to the GLP’s request for comment. The group disinvited Folta after several Twitter users resurrected the campaign against him and claimed his views as a biotechnology advocate conflicted with the purpose of the workshop. On April 21, messages began hitting Twitter with the hashtag #BanFolta. The account responsible for the hashtag tweeted: 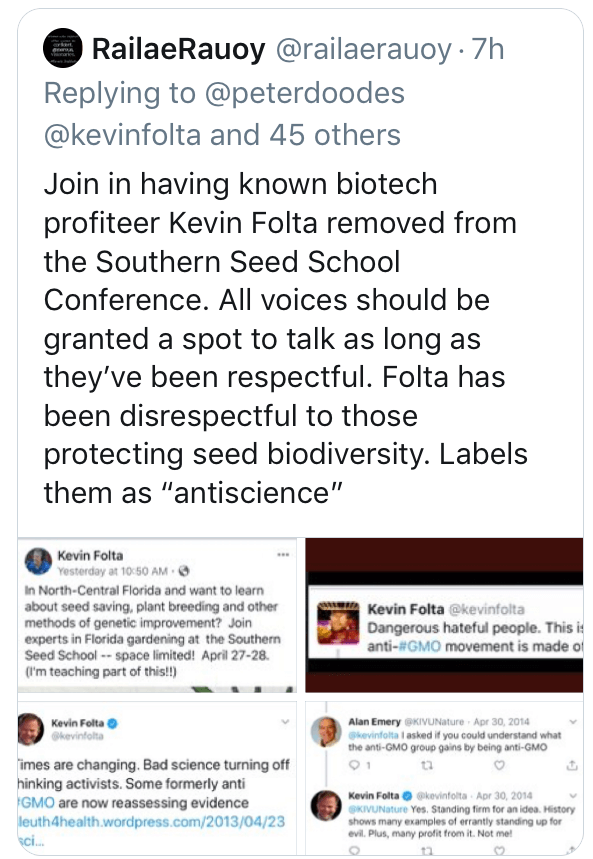 The Twitter thread was picked up by GM Watch, a prominent anti-GMO advocacy site. It questioned why Folta, who GM Watch claimed promotes “pesticide propaganda,” was invited to the event in the first place. A frequent critic of the crop biotech industry, writer Michael Balter, who was fired by Science Magazine in 2016 because of a “breakdown in trust” between him and his editors, also joined in the campaign, suggesting that Folta has undisclosed ties to Monsanto because he won’t deny those allegations.

“He’s had plenty of chances to say he did not own #Monsanto stock then (or now) and has not taken them up,” Balter wrote. “What are we to think?” Folta has denied numerous times that he has financial ties to Monsanto.

Several people who had planned to attend the workshop voiced their frustration with the decision to ban Folta from speaking. “Hard pass, now that @kevinfolta has been removed for being a scientist,” one Twitter user wrote in response to the announcement. “Shameful small-mindedness wins again.” Timothy Caulfield, professor of health law and science policy at the University of Alberta in Canada, also weighed in: 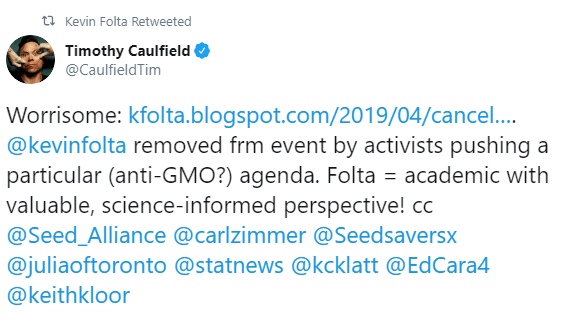 Folta told the GLP by email:

I’m disappointed for those that wanted to attend, I love teaching concepts in genetics, and for people interested in biodiversity and seed saving, a handle on genetics is critical. It is sad that this content has been omitted from the curriculum.

Folta believes this incident is typical of the harassment he and other researchers have experienced at the hands of US-RTK and other activist groups:

The episode shows how scientists are systematically eliminated from public discourse, even when speaking about non-controversial issues. It shows how anti-scientific organizations work to not let reputable scientists earn trust with the community, and how social media is manipulated to accomplish their mission.

Folta has posted his own version of events on his blog. He says  he will still present the content from his seed school presentations, in the same building after the original event wraps up. “The students signed up because they wanted to learn something interesting and I’m going to give them that,” he wrote to the GLP. “They should not lose out because the leadership was bullied into a bad decision.”