This article or excerpt is included in the GLP’s daily curated selection of ideologically diverse news, opinion and analysis of biotechnology innovation.
Despite its ongoing agricultural problems, most of Africa has been reluctant to embrace the idea of allowing its farmers to grow genetically altered seeds. This hesitancy has delayed the potential benefits that biotechnology can offer through crops engineered to resist common pests, disease and drought.

Through 2018, only South Africa (soybeans, corn and cotton) and Sudan (cotton) were growing GMO crops.

It’s not an issue that’s going away anytime soon, considering that continent’s population is expected to swell from its current 1.3 billion to 2.5 billion in 2050, when it will account for about one quarter of the world’s population.

[Editor’s note: This is part five of a series on the potential benefits of genetic engineering technology for Africa. Part one looks at climate change. Part two examines the fight against malnutrition. Part three covers Africa’s growing acceptance of GMOs. Part four details the use of genetic engineering against pests and disease.]

There are signs, however, that attitudes in some African nations are changing. Perhaps the best example of this may be found in Nigeria with its 2015 passage of a biosafety law that opened the door for field trials and the commercialization of GM crops.

There are several factors that play a role in Africa’s rejection of GM crop cultivation.  First, only a few Africa nations have approved biosafety laws regulating the testing and cultivation of GM crops.

Second, these crops face opposition from an vocal anti-GMO movement that has been fueled by major NGOs, such as Greenpeace and Friends of the Earth (see the GLP profile here). Critics seek to persuade the African public that GMOs are not “natural”; are dangerous to human and animal health and the environment (a claim for which there is not a shred of scientific evidence); will only enrich multinational agribusiness companies at the expense of small farmers; and do not significantly boost crop yields.

Haidee Swanby of the African Center for Biodiversity for instance said:

The US, the world’s top producer of GM crops, is seeking new markets for American crops in Africa. The US administration’s strategy consists of assisting African nations to produce biosafety laws that promote agribusiness interests instead of protecting African nations from the potential threats of GM crops.

The Alliance for Food Sovereignty in Africa perpetuates the myth that there is no scientific consensus concerning the safety of GMOs and views GMOs as the “sharp end of the push for corporate control of African food systems.”

GM crops have reinforced the broken model of industrial agriculture, with its biodiversity-reducing monocultures, its huge carbon footprint, its economic pressures on small-scale farmers, and its failure to deliver safe, healthy and nutritious food to those who need it. It is therefore time to question the myths spun by the GM industry.

Finally, African attitudes towards these crops have been negatively affected by the anti-GMO sentiment in Europe, a major trading partner and key provider of economic and humanitarian assistance. It is not surprising therefore that many African nations have followed the EU lead in adopting the precautionary principle regarding GM crops, even though the scientific evidence strongly indicates that GM crops are no more hazardous to human health then conventionally grown crops. 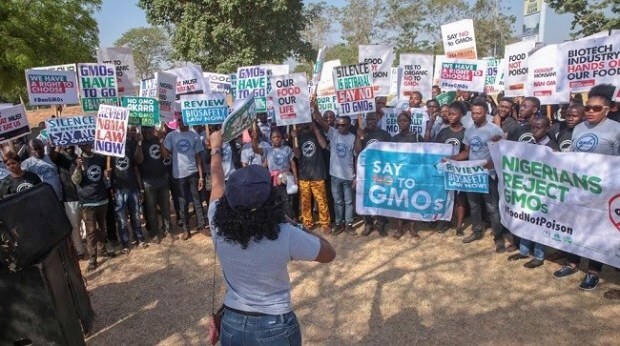 In 2018, three years after laying the groundwork for GMOs, Nigeria approved its first crop, Bt cotton, for commercialization.  And in January 2019, the government approved the release of Bt cowpeas after the National Biosafety Management Agency affirmed the crop’s safety. It will be the first GM food crop to be grown in Nigeria. Bt cowpeas have undergone nine years of successful trials that have demonstrated it can drastically reduce the use of pesticides and increase yields by up to 20 percent. The move is particularly significant as Nigeria is the largest producer and consumer of cowpeas. It is expected the government will grant approval to cultivate the new crop sometime this year.

Other GM crops that are currently being field tested with the objective of commercializing them are nitrogen-and water-efficient and salt-tolerant rice, bio-fortified sorghum, Bt corn, herbicide-tolerant soybeans, and virus-resistant cassava enhanced with iron, zinc and Vitamin A.

Dr. Ogbonnaya Onu, minister of science and technology, called the commercialization of Bt cotton a “landmark” in the history of modern technology in Nigeria and said it has the potential to revitalize the nation’s struggling textile industry. It was the nation’s second largest employer in the 1960s and 1970s but is now “comatose.”

President, Kasali Bello of the Textile Researchers Association of Nigeria said the “commercialization of Bt cotton would create a ripple effect that will guarantee farmers’ increased yields while boosting textile production and creating more jobs for the nation’s unemployed youths.”

New Bt cotton can produce 4.1 to 4.4 tons per hectare, compared to the local variety, which yields just 600 to 900 kilograms per hectare…And since Bt cotton can resist the devastating bollworm and tolerate sucking insects, it will help farmers reduce their use of pesticides, thus minimizing environmental impacts and lowering production costs.

The new cowpea could help tackle the problem of malnutrition in the country, said Dr. Matthew Ashikeni, secretary general of the Epidemiological Society of Nigeria.

But despite the government’s strong support for the growing of GM crops, there remains vigorous opposition to their commercialization.

Nnimmo Bassey, director of Health of Mother Earth Foundation (HOMEF), has called for a ban of the crops and resulting food products, arguing they “pose great risk and threats to our food system, bio-safety and overall well-being.”

Joining in the criticism is the Kilmanjaro Women steering committee, chaired by Ejim Lovelyn, with claims about the land being contaminated by GMO seeds and unusable for traditional seeds:

Any soil that you plant any GMO seed, no matter what you do, you cannot repeat that same seed again on that land.  If you plant it once, the life span has gone. You cannot replant it…It has been proven to be cancerous and most of the times, the post-harvest loss we use to have is as a result GMO seed because our indigenous seed suffers a lot.

In December 2018, a coalition of civil society groups comprised of farmers, consumers, civil society, youth and women’s groups rallied in Abuja, the capital, to denounce the commercialization of GM crops. They issued a proclamation that stated in part:

We urge that Nigeria be circumspect about technologies that aim to contaminate our natural varieties and environment, destroy our agricultural systems, rupture our socio-economic fabric and assert unbridled control over our food system…We reject agricultural biotechnology as solution for food challenges.

Less than 10 days later, they accused the National Biosafety Management Agency of prioritizing money over the health of Nigerians and called for the nullification of the permits already granted for the commercialization of GM crops.

Government officials have been active in fighting back against these critics.

Dr. Rufus Ebegba, director general of the National Biosafety Management Agency for instance argued that the Mother Earth organization’s criticisms are not “scientifically based.” Dr. Rose Gidado, assistant director of the Agricultural Biotechnology Department of the National Biotechnology Development Agency, said those who are campaigning against genetically modified cops are “anti-modern” and are “engaging in deceit.”

The government is embracing GM food technology as a means of expanding food production at a time when the population is growing at a rapid rate. By 2050 Nigeria’s population is expected to be 411 million, which would be the third largest in the world after India and China. At present the population is 191 million.

The government’s commitment to agricultural biotechnology is likely to result in many more GM crops being sanctioned for commercialization. This has the potential to revitalize the troubled agricultural sector, boosting farm incomes and employment. Barring a change of course, Nigeria is on pace to become one of the largest GM producing and consuming countries.