This article or excerpt is included in the GLP’s daily curated selection of ideologically diverse news, opinion and analysis of biotechnology innovation.
It’s called an artificial placenta, it’s not science fiction anymore, and it’s a major technological milestone along the path to ectogenesis — development from egg to full-term infant outside the mother’s body. Ectogenesis would require a complete artificial womb, and the timeline for achieving that is hard to plot. But the artificial placenta could be seen much sooner.

That’s exciting for some people, frightening for others. But in the world of neonatology, the expectation is that survival rates will be improved for infants born prematurely, and those requiring invasive treatments — including surgery, cell therapy and gene therapy — during the fetal period. The artificial placenta makes those treatments easier and safer. But it’s also a potential game-changer for public policy. That’s because it works by avoiding the usual, urgent need to get the fetal lungs online. And it could put fetal viability into a spotlight that it hasn’t seen since the Roe versus Wade Supreme Court Decision of 1973.

Artificial placenta researchers are not particularly trying to reopen that old discussion. Their goal is to improve survival rates in the gray area of maturity, not to expand the limits of viability down to lower gestational ages. (Fetuses are considered viable at 22 to 25 weeks, though they often do not survive aggressive treatments at that young age.) This is analogous to squaring off the survival curve for the elderly — trying to get more people to survive into their early hundreds — rather than enabling some people to survive beyond 125 years, using gene therapy, stem cells, brain implants, and other regenerative strategies.

The problem is that the very nature of what the artificial placenta does — maintenance of the fetal respiration scenario — will create a situation where anyone possessing the equipment could extend viability backward to a gestational age not currently survivable. Ultimately, that may clear the way to ectogenesis. But what will it do to the abortion debate?

Technically speaking, viability is defined in actuarial terms as the gestational age above which 50 percent of premature infants will survive. In high tech countries, this comes out to 23-24 weeks gestation, but survival depends on numerous factors, including whatever medical situation leads a fetus to be born early. If a fetus is doing generally well, but must be extracted because the mother becomes sick or injured, survival could be more likely. But where the fetus has problem itself, this could have a negative effect on survival. 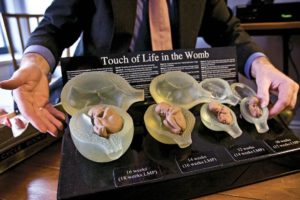 In any case, if a fetus is to be brought out early, the standard strategy is to prepare the lungs and the cardiovascular system to transition early from a pre-birth to a post-birth state. This includes giving drugs to promote early closure between blood vessels connecting with the right and left side of the heart and to make the lungs mature faster. At birth, the newborn gets agents sprayed into the lungs and is put onto mechanical ventilation. New ventilation modalities are constantly being developed, resulting in incremental improvements in survival, but it’s a Catch 22 situation, because mechanical ventilation is bad for immature lungs. Given all of this, the most premature human infant ever to survive was born at a gestational age of 21 weeks, 5 days. This happened in 1987 and then again in 2010, which illustrates how unlikely it is. Of course, this is using the standard, lung-based approach to treatment.

But the artificial placenta approach is to forget about ventilation for a premature infant, until the infant gets to 26 weeks gestation, or even 28 weeks where survival gets to be about 90 percent. During the intervening weeks, you would maintain fetal respiration scenario, which is to say that the infant does not breathe at all. In the womb, the lungs are closed up, due to high pressure on the right side of the heart and the blood vessels connecting with it. The fetus gets oxygen from maternal blood coming in through the umbilical vein and unloads carbon dioxide by sending blood to the mother through two umbilical arteries. In comes a technology called ECMO — extracorporeal membrane oxygenation. It is used for a variety of medical situations, for instance to support a patient after open heart surgery or as a bridge for someone awaiting a heart transplant.

Refinements of ECMO have made it applicable to premature infants. So researchers in a handful of locations, including the University of Pennsylvania’s Children’s Hospital (CHOP), have been combining ECMO with other technical innovations to create an artificial placenta. Under the direction of Alan Flake, UPenn Professor of Surgery and Obstetrics and Gynecology, the CHOP researchers have been refining their system on fetal lambs, where they have overcome numerous technical obstacles. The standard way to deliver ECMO, for instance, is by interfacing with the carotid and jugular blood vessels in the neck. This looked like the best artificial placenta option at first, because umbilical blood vessels tend to spasm and are difficult to cannulate (to insert tubes into them). But connecting ECMO through the neck in fetal lambs turned out to produce difficulties that are likely to  occur in a human fetus as well. This has led researchers to invent a novel way to access the umbilical vessels. 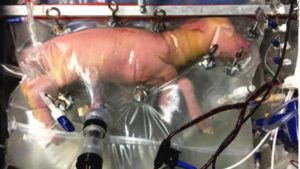 They are using ECMO connected through the umbilical vessels, keeping the fetus in a specially developed bag to reduce infections. This method has showed success with lambs extracted from the mother at a gestational age corresponding to human fetuses at the boundary of viability.

“I have no interest in pushing back the limit of viability,” said Flake, in his lecture at the 2016 Childx Symposium. “Doing that would create other problems.”

But things are seldom so simple. Lambs are bigger than human babies, so to match the physiology of a human fetus of that borderline survival period, the next step was for the team to use smaller fetal lambs, which is to say fetuses of a still lower gestational age. It turns out that the system works just fine in those fetal lambs. The researchers connected them with ECMO and the other components of the artificial placenta. The lambs survived at an age equivalent to a 16-17 week old human fetus.

Because the artificial placenta is about squaring off the survival curve, and because it works so well in fetal lambs, the group at CHOP has received an investigational device exemption (IDE) from the US Food and Drug Administration. This will fast-track the artificial placenta into clinical neonatology and eventually could change the respiration paradigm from the lungs to the umbilical blood vessels.

Outside of neonatology, this type of development affects various groups differently. Transhumanists welcome the artificial placenta, because it could lead to an artificial womb. But social conservatives are worried about changes in the traditional male-female roles and related issues. But what about inside the neonatal intensive care units? Routinely, the idea would be to use the technology to save the lives of more premature babies.

As clinical trials proceed (and to be sure, none are yet in progress), we might envision technical obstacles, such as difficulties in cannulating a very small umbilical cord vessel preventing neonatologists from matching 16-17 week gestational age equivalence of the fetal lambs (which have shorter, but wider cords compared with humans). On the other hand, we live in a time of nanotechnology advancements, so size may not matter. Yet other obstacles may be found in the development of the liver and other organs. But this means that lungs will no longer be the limiting factor. How long will it be until someone extracts a fetus just a little bit earlier than usual? And where will the viability debate go from there?