‘Natural health’ and conspiracy sites exploit social media to fester opposition to GMO crops. Here’s a study about what can be done to stop it

This article or excerpt is included in the GLP’s daily curated selection of ideologically diverse news, opinion and analysis of biotechnology innovation.
The average American consumes about one ton of food each year. Livestock chomp on approximately 50 billion servings of grain and other foods annually. Together, these figures represent trillions of meals since 1996, when crops modified by biotechnology, mostly corn and soybeans, but also alfalfa, potatoes, squash and papaya, went on sale in the United States.

How many deaths or illnesses have been linked to genetically modified crops? Not one. Not so much as a sniffle.

That’s not a surprise to scientists, as almost every food-related expert and every major oversight or regulatory body in the world has concluded that biotech crops are as safe for human and animal consumption as food grown conventionally or organically. These conclusions should have put the GMO controversy to rest years ago, but misinformation still swirls. And as anyone familiar with Europe’s continued opposition to cultivating GMO and gene-edited crops knows, skepticism of genetic engineering shows no signs of fading.

Some crops have been approved for cultivation in the EU but few are grown. Spain is the largest producer, with GMO corn representing about 20% of its output. Smaller amounts are grown in the Czech Republic, Slovakia, Portugal, Romania and Poland. But because of near-hysterical consumer and political opposition, almost no GMO-derived foods are available in supermarkets (the relatively small amount of maize is used for animal feed). Because of its role as a major global trading partner, and the oversized influence of its anti-biotechnology ‘environmental’ groups, Europe has spread its ideology to much of Africa and Asia.

How did we get here?

So, how did a movement so at odds with accepted science catch on and continue to thrive?

According to a November 2019 study published in European Management Journal by Bayer Crop Science researchers, the answer can mostly be explained by the impact of social media, which thrives on disinformation. After examining the popularity of 94,993 unique online articles about GMOs between 2009 and 2019, the researchers concluded that this digital landscape has attracted organizations (such as the Non-GMO Project) and ideologically sympathetic activists who have used social media to dominate the discussion about crop biotechnology. These groups and individuals represent:

…. a new kind of competitor that seeks to monetize attention to disrupt, disparage, and support alternative campaigns through misleading information …. Preliminary results suggest that a small group of alternative health and pro-conspiracy sites received more totals engagements on social media than sites commonly regarded as media outlets on the topic of GMOs. 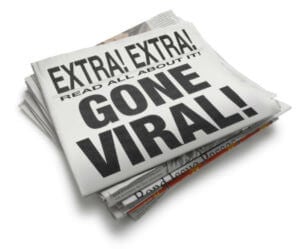 Some people may immediately challenge the study, as it was written by researchers at Bayer Crop Science, which was previously Monsanto. Despite the obvious concern that the authors’ conclusions are self-serving – after all, Monsanto has been the target of anti-GMO activists for more than two decades – there is much in this report worth pondering. The study examines the strategies and incentives driving the mobilization of disinformation, and highlights data that illustrate how effectively crop biotech critics undermine the public’s confidence in mainstream science.

In the era of ‘fake news’ dominated by partisan coverage of impeachment hearings, perhaps the most important takeaway from the analysis is that consumers are increasingly dependent on unaccountable social media platforms that reward the spread of sensationalism and disinformation—often with devastating results.

Social media allows its users to interact with more people than ever before and consume information from an effectively unlimited number of sources, the authors note. These aren’t inherently negative attributes; indeed, this kind of open access enables people to educate themselves and network in ways that weren’t possible just two decades ago. But there’s a steep downside. In the environment created by Facebook, Twitter and other platforms, people who can weave convincing narratives (whether true or not) exploit consumers’ confirmation biases and desire to share the same views as their tribal peers, as the researchers explained:

Users or readers tend to believe what they see on their computer screen …. Humans are story seekers, so intuitively follow a (compelling) storyline …. Adding to all of this are the base human cognitive habits of confirmation bias, bandwagon effect, or herd mentality where citizens tend to conform their beliefs about science, society, and risks “to beliefs that predominate among their peers….” 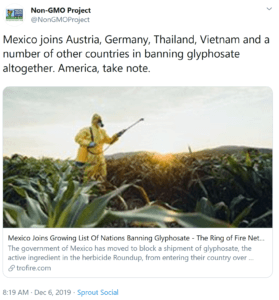 For example, the Non-GMO Project took to tweeting about five countries supposedly imposing bans on glyphosate, a controversial herbicide paired with biotech crops. The tweet itself was misleading as two of the countries (Austria and Thailand) have since halted their bans, and a third, Germany, imposed a ban that takes force four years from now, and scientists are already unified in challenging it.

But no matter. The clever post served its purpose. Those in the US who read the tweet, and it was aimed at them, were unlikely to question its veracity and even less likely to seek out evidence analyzing the rationale for such a ban. The Non-GMO project has no incentive to play straight with the facts and Twitter users have no reason to scrutinize the Tweet. GLP reached out to the Non-GMO Project for its response to the study, but received no reply.

The example illustrates how social media’s free-for-all-environment rewards attention seeking over factual communication. This effect is often magnified because Twitter prioritizes loud and provocative over measured and balanced; disinformation captures attention. The scale of the problem is immense as almost 3.5 billion people use social media daily.

“The popular appeal and often sensational nature of disinformation ‘attracts millions of readers,'” the researchers noted. “And because it attracts the masses, it can be weaponized to undermine or target products, people, and ideas and – ultimately – used for monetary gain.”

While legacy news outlets like the Washington Post and Wall Street Journal attract a sizable readership when they cover crop biotechnology, the numbers pale in comparison to “alternative” news sources that rely on social media to amplify their message. These include well-trafficked activist sites like Mercola, Natural News or Sustainable Pulse, and news sites like RT (formerly Russia Today), which has been lambasted by biotech experts for its dubious coverage of agriculture. All these outlets advance counter-consensus narratives about GMO safety, thus influencing the broader discussion about biotechnology, and turn a profit while doing it. As Cami Ryan, a social scientist with Bayer and one of the study’s co-authors, told the GLP by email:

In the case of GMOs, it’s likely that motivations behind this movement include efforts to both sway public opinion and for monetary gain. Based on our initial analysis of the data, it appears that for the $26B non-GMO project to be as successful as it is, there needed to be a market for it. And that market was built on disinformation.

If you want to encourage a certain behavior, you pay people to engage in it. Social media platforms in effect pay activists (already motivated by ideology) to spread questionable narratives by rewarding deceptive messaging with higher readership, advertising revenue and ‘natural’ product sales. This incentive structure helps create a scenario in which society’s views on a given issue are increasingly divorced from the relevant facts, and the consequences can be devastating, as the authors concluded:

The socioeconomic costs of disinformation campaigns as illustrated in the case of GMOs are significant …. [L]ess visible costs are diminished confidence in science, and the loss of important innovations and foregone innovation capacities. The most deleterious effect …. may be to smallholder farmers in developing countries. Unnecessary social and political controversy about GM crops create barriers to access to technologies for those that stand to benefit from them the most.

Can anything be done to clean up our corrupted public discourse about biotechnology?

“We are not making recommendations on how to stop [online disinformation] nor would we presume to know where to begin,” Ryan added in her email to the GLP. “Critical thinking is required to differentiate between what is disinformation and what is not and that always starts with increased awareness that it even exists in the first place.” Scientists have accelerated this awareness effort by getting on social media, starting podcasts and writing directly for the public, but this has yet to solve the problem.

One other possibility not discussed in the new study is that the benefits of new technologies may eventually overwhelm the fear that stifles innovation. The plant-based Impossible Burger, for instance, has proven enormously popular with American consumers because of its remarkable similarity to beef and perceived environmental benefits, even though it contains GMO-derived soy. Gene-edited crops with qualities that appeal to consumers offer a related case study of how innovation could counter the effects of social media disinformation. Yet useful products aren’t a surefire solution to anti-science activism, as the medical community has discovered with vaccines.

So, while progress has been made in countering the spread of online disinformation, the fact remains that social media is still a relatively new phenomenon whose effects on human behavior are not fully understood. As a result, the unsatisfactory answer to “how do we control the spread of disinformation?” may be “we don’t know yet.”