Novels ‘All About Evie’ and ‘The Family Upstairs’ illustrate how DNA tests can reveal ‘dark secrets’, from rape to unknown siblings

This article or excerpt is included in the GLP’s daily curated selection of ideologically diverse news, opinion and analysis of biotechnology innovation.
I recently read two works of fiction, “All About Evie” and “The Family Upstairs,” that touch on the issue of defining family. The plots inadvertently echo current concerns over the possible fallout from unexpected consumer DNA ancestry testing results.

Each book is a multi-generational saga blooming with secrets and surprises. But one novel uses DNA testing to reveal relationships and the other doesn’t.

My unplanned reading of one after the other served as a metaphor of sorts for the fallout from receiving a DNA surprise. The ending of the book based on the DNA test was abrupt and seemed contrived, much as discovering an insta-family can be. The ending of the book that slowly uncovered secrets as relatives recognized each other and connected was satisfying and rang true.

It was inevitable that fiction writers would begin weaving unexpected DNA test results into their narratives.

As the holiday season ramped up, the sappy ads for discounted DNA spit tests grew pervasive. And now those of us who have already discovered that we are “NPE” – not parent expected – from DNA testing are bracing for the unveiling of new relatives by Groundhog’s Day.

A young woman gleefully announces that an entire Italian village has her father’s nose.

“Michael,” gesturing expansively at a panorama of cliffs, extols meeting 20 new cousins on a jaunt to Ireland.

“I felt more connected to who I am,” says Krystina about tracing her ancestry back to Cameroon, Congo, and Ivory Coast.

The happy ads avoid the possibility of the sucker punch of discovering that you’re not from where, and whom, you thought you were. True, the testing company websites are full of disclaimers, but customers have to actually read them.

The stories behind discovery of being “NPE” are diverse. Mine, like thousands of others, goes back to an anonymous sperm donor, under the direction of a doctor trying to circumvent male infertility.

Being NPE didn’t always arise from a clinical situation like treating infertility. A “fun” DNA test result today might reveal, after some probing and sleuthing, a disturbing, forgotten, or suppressed event from long ago, such as:

‘All About Evie’ and inherited clairvoyance

The reviews of “All About Evie” on donor-conceived and NPE Facebook groups gave me high hopes of an intriguing saga of discovering DNA connections. But the book was so absurd that it was an effort to finish. 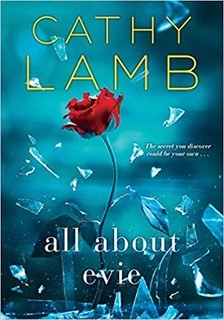 Protagonist Evie is a young woman who, after DNA testing, discovers that she isn’t related to her sister, mother, and two aunts, all of whom she lives with. Evie’s always looked different and had peculiarities, but her quirky traits don’t seem easily explained by genetics. She inherited from biomom:

Author Cathy Lamb weaves the tales of teen biomom Betsy incarcerated for manslaughter and having her newborn scooped away in prison, and of unknowingly adopted Evie. Poor Betsy names her stolen daughter Rose, and wouldn’t you know it, Evie just loves roses and lives in a house called Rose Bloom Cottage!

Evie is short with black hair. Sis Jules is a tall blond with dark brown eyes, as are adoptive mom Poppy and aunts Camellia and Iris. Evie just didn’t fit.

The powerful premonitions that Evie doesn’t realize are inherited affect her behavior and propel the plot, while bringing in a curiously oversimplified interpretation of basic genetics:

Betsy’s mother, with black hair and golden eyes like Betsy’s, had premonitions, too. Her mother had, too, and her grandmother and great-grandmother. They were all Irish. The second sight. We have it.

That’s a little too simple. Was the trait of clairvoyance autosomal dominant and sex-influenced so that it somehow showed up only in females? Or were there no males?

I applied Mendel’s first law to calculate the probability of five generations of women inheriting the same dominant trait: 1 in 32.

The DNA test surfaces innocuously in the middle of the story. Jules hands Evie a spit kit, so they can narrow down the European countries where their ancestors lived. 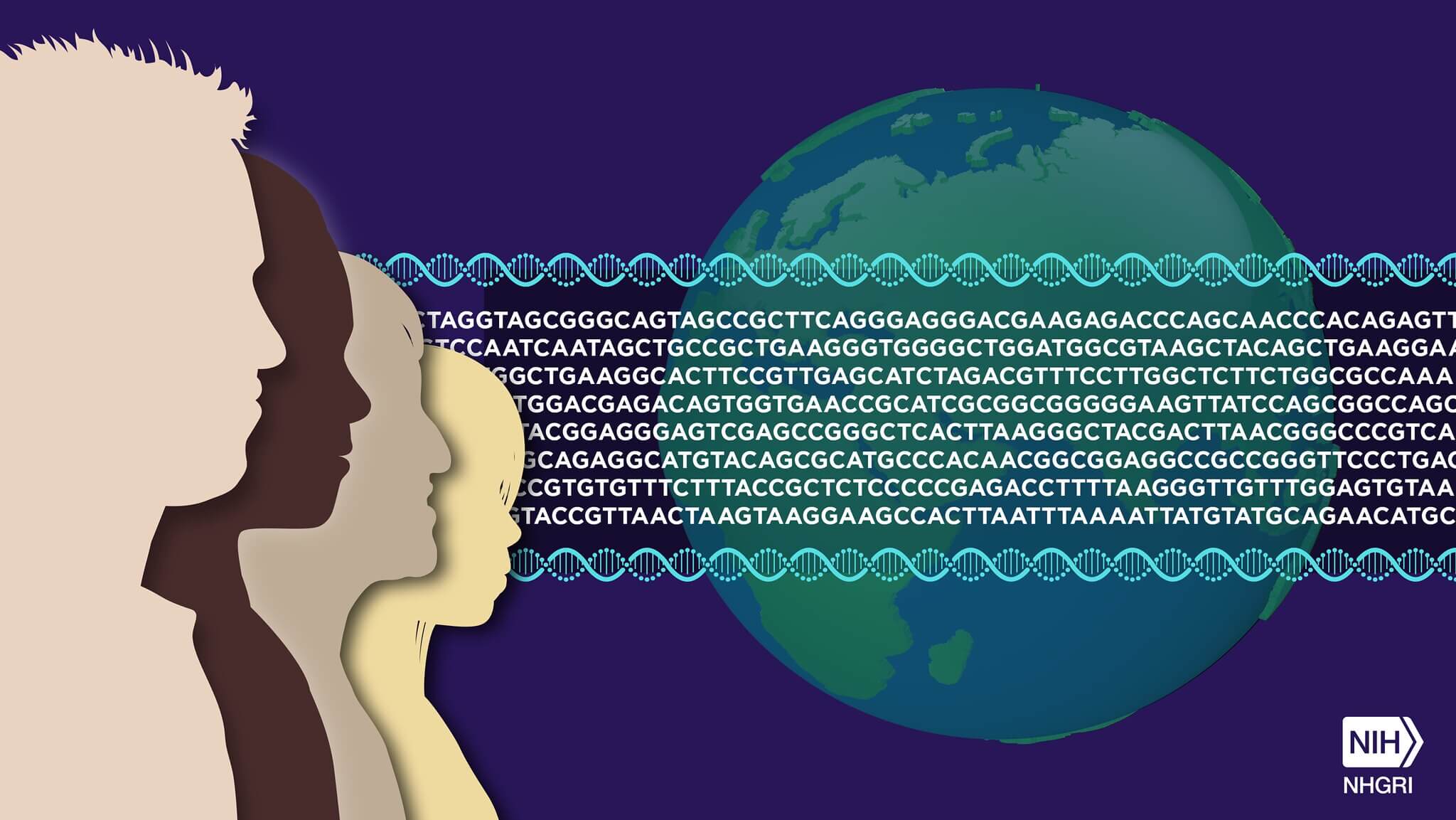 “Wouldn’t that be fun to have a surprise? To be from somewhere we knew nothing of, like Zimbabwe or Ireland or Russia?” asks Evie just before she spits.

Meanwhile, the florally-named adoptive mom and aunts collectively freak out. They know where Evie came from.

I’m going to skip it. The government knows enough about me already. When they have my spit, what will they do with it? Steal the information? Sell it to the highest bidder? Use it to determine what I’m going to get sick with and die of so my insurance company can deny me coverage? Tell me they can link me to a crime I haven’t committed?

The author nailed it on the fears. I’ve heard people say these things almost verbatim.

Amazingly, as soon as Evie and Jules’s spit hits the mailbox, an item in the local newspaper spotlights Betsy and her partner-in-exonerated-crime Johnny, now the owners of a Whole Foods-like grocery chain. And it’s nearby! They hope their daughter takes a DNA test and finds them.

Evie sees the newspaper. Curious, she finds Betsy on Facebook. Black hair and golden eyes! Just like hers!

But there’s more. Betsy has since had another daughter, and guess what, she has – black hair and golden eyes!

Once the truth unspools, everyone meets and they all live happily ever after. Evie laments to Poppy, “It would have helped me to know … that having premonitions was genetic.”

The epicenter of Lisa Jewell’s marvelous horror novel The Family Upstairs is a spooky, rambling house in Chelsea, England. Twenty-four years ago, the bodies of three black-robe-clad adults had been discovered on the kitchen floor, and an unharmed baby found upstairs in a crib. 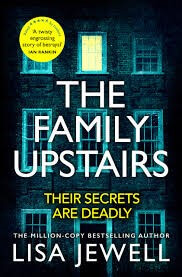 Libby, who knows she was adopted,  just turned 25 and has inherited the house. She explores the mansion and researches its history. Two other narratives are threaded in with Libby’s tale, from Lucy in France and from Henry, who grew up in the house when his parents were wealthy. Both are older than Libby.

At the center of the story is a charismatic man and his wife and two kids who moved in with Henry’s family and cast a spell of sorts. The mansion became headquarters of a cult. The story comes to involve child abuse, sex slaves, a closeted gay man, impersonations, and mental illness.

A reader can’t figure out who is related to who, and how, until the very end of the book. And no one spits in a tube to find out. They talk to each other.

The difference between the plots of the two novels isn’t in the science, but in the secrecy. Both stories have satisfying, happy endings. But real life doesn’t always turn out that way.

I wish that the consumer DNA testing companies were held more accountable in their advertising for unintended consequences of the revelations that may stem from spitting in that tube and popping it in the mail. It may be so much more than entertainment.