What’s your ‘ageotype’? Classification system explains why some of us are older—or younger—than we look

This article or excerpt is included in the GLP’s daily curated selection of ideologically diverse news, opinion and analysis of biotechnology innovation.
We hardly need another way to classify people, and especially not another metric of the biological fallout from the passage of time. The mirror does a pretty good job of doing that, highlighting spreading wrinkles and graying or disappearing hair.

The “ageotypes” described in a new study from researchers at Stanford University may help health care providers add a dose of precision medicine to the one-size-fits-all approach that still pervades many a clinical encounter. The findings of the new study appear in Nature Medicine.

“We want to know more about aging than what can be learned from population averages. What happens to an individual as they age? No one has ever looked at the same person in detail over time,” said senior author Michael Snyder, professor and chair of genetics at Stanford University School of Medicine.

The four “distinct aging patterns,” or “ageotypes,” are

This new view of aging is part of the research group’s longitudinal approach to tracking biological change with time.

Their strategy tapped into

The result is what they term “a new taxonomy of disease on the basis of molecular measures.” 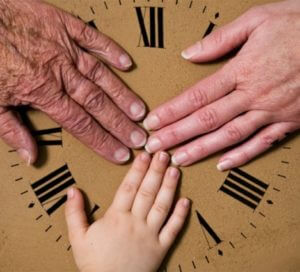 The researchers scrutinized “molecular aging” in 43 healthy men and women who were between the ages of 34 and 68 during the two years of the study, each assessed five or more times. Although the number of participants was small, collectively they yielded some pretty big data.

Over 624 visits, the participants were probed for expression of 10,343 genes; levels of 306 plasma proteins, 722 metabolites, 51 clinical markers, and 62 cytokines (molecules that the immune system’s T cells produce); and the presence of 6,909 species of microbes that had taken up residence in their noses and colons, assessed with swabs and stool samples.

The researchers boiled all the data down to 184 molecules from different ‘omes’ that showed distinctive levels and trends as a person ages, over the two years of the study. And that was further consolidated to 87 significant molecules acting within 84 significant pathways that lie behind aging human physiology.

Practical applications of the four ways to age

The ageotypes are broader designations than disease categories, like people with cardiovascular disease or cancer. And just like people can have hypertension or a heart condition as well as a cancer, we can fall into more than one ageotype. The designations aren’t either/or; many people age in all four ways, Snyder said.

He suggested using the ageotypes to identify disease risks and then to act. For example, “immunoagers will be more prone to cancer,” Snyder said, and so those people should be especially vigilant in lowering controllable risk factors and getting cancer screenings. Immunoagers are also more susceptible to infection – so vaccines are a must.

Related article:  Podcast: How do mRNA vaccines work and why were they developed so fast?

Those who are metabolism/inflammation agers might alter the diet to dampen inappropriate inflammation and possibly take anti-inflammatory drugs. Metabolic agers also might be at a higher risk for diabetes than the general population. They can follow a low-carb diet and exercise to keep blood sugar within a normal range, and have blood tests for elevated hemoglobin A1c, a measure of blood sugar levels, as they grow older.

The metabolism/inflammation ageotype also includes pathways that could lead to cardiovascular disease, such as blood clotting, high LDL and low HDL cholesterol, and cardiac hypertrophy (heart overgrowth). Diet and exercise changes along with stress tests, echocardiograms, and other scans can provide baselines or, if disease has begun, diagnoses, and action begun.

“Our study captures a much more comprehensive view of how we age by studying a broad range of molecules and taking multiple samples across years from each participant. We’re able to see clear patterns of how individuals experience aging on a molecular level, and there’s quite a bit of difference,” Snyder said.

The ageotypes might explain why it can be so difficult to tell someone’s age from their appearance, especially as we age. A person in the sixth decade can look fifty-something or seventy-something. Of course women do more to alter the visible ravages of time – just compare Jane Fonda to David Crosby.

Snyder isn’t shy about participating in his own investigations. He was patient #1 in the group’s initial “big data” study, reported in Cell in 2012, on monitoring a single individual with multiomics profiling for 14 months.

Perhaps not surprisingly, the study just published revealed that people might see that first gray hair or feel joint stiffness on awakening at different ages, and proceed through approaching decrepitude on different timetables. “I was a bit disappointed to see that I was aging at a pretty average rate,” Snyder said after collecting his own data at the end of 2016. The results prompted him to begin lifting weights.

“The ageotype is more than a label; it can help individuals zero in on health-risk factors and find the areas in which they’re most likely to encounter problems down the line. Most importantly, our study shows that it’s possible to change the way you age for the better. We’re starting to understand how that happens with behavior, but we’ll need more participants and more measurements over time to fully flesh it out,” Snyder said.