This article or excerpt is included in the GLP’s daily curated selection of ideologically diverse news, opinion and analysis of biotechnology innovation.
After decades of special interest groups raising unwarranted fears and misrepresenting every aspect of so-called “GMOs”, opponents of innovation in plant and animal breeding are adding a new under-the-bed-monster to the mythical menagerie.  This one is called “gene editing” aka “GE”, and it seems the topic is everywhere these days. But what, exactly, is this new beast?

It becomes easier to grasp if when we see the term “gene editing” we think “word processing for genes.” We’re all familiar with word processing software. It allows you to create a document, and then within it, to delete a letter, add a letter, delete or add words, sentences, paragraphs… you can cut and paste text chunks of various sizes and move them around; you can even cut and paste whole chapters or volumes from one document, or one computer, to another, and much more.

Gene editing is similar. As with word processing there are a variety of tools, though the names are more exotic, and they have their own alphabet soup of acronyms:  zinc finger nucleases (ZFNs), meganucleases, transcription activator like effector nucleases (TALENS), oligonucleotide directed mutagenesis (ODM), and the technique of the moment, clustered regularly interspersed short palindromic repeats, or CRISPR.

Each of these gene-editing tools is fascinating in its own right, with a unique evolutionary history and mode of action. But far and away the most talked about, the most exciting, and the most powerful of these is CRISPR. First discovered by Japanese researchers in 1987, for years it remained a curious mystery that drew many researchers to try and figure out what it is and how it works. After a lot of brilliant detective work by different researchers around the world a sensible picture emerged: CRISPR is an adaptive immune response that bacteria use to defend against their number one threat, an attack by a virus.

There is an abundance of fascinating molecular biology here, and in seeking to understand what’s going on it’s easy to drown in details, as this graphic explaining CRISPR illustrates (credit): 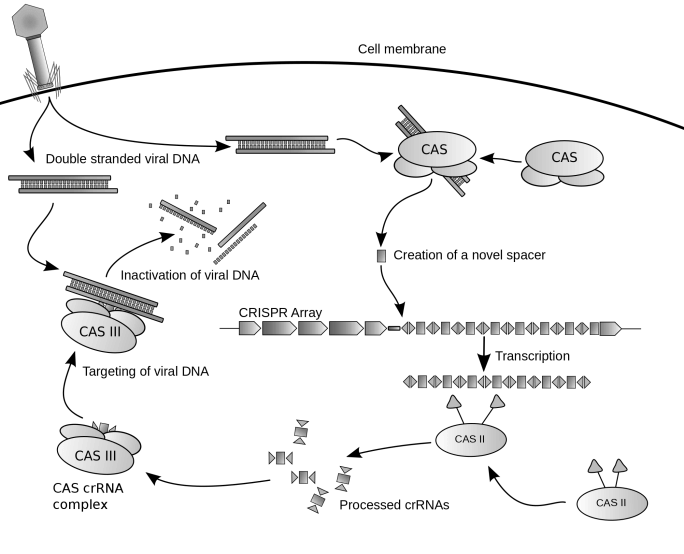 But it becomes easier to understand if we think about CRISPR as basically two functions wrapped into one package: a function that identifies and locates a specific DNA sequence , and a function that cuts DNA at the identified location – essentially, a mug shot and a scalpel. 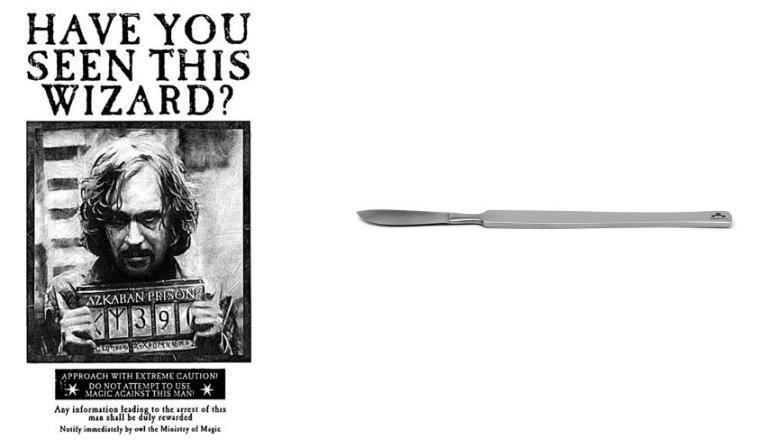 When a virus attacks a bacterium, the bacterium grabs a snippet of the virus’ DNA (the mugshot) and adds it to the catalog of “clustered regularly interspersed short palindromic repeats” the bacterium maintains in its DNA, like a post office wall full of mug shots. The “CRISPR associated sequence” (as in Cas-9) is a nearby gene in the bacterium associated with the CRISPR cluster directs the deployment of the scalpel, a DNA cutting enzyme known as a nuclease. The bacterium circulates mugshot-plus-scalpel packages throughout its cell, and when a virus invades, if its DNA matches the mugshot, the scalpel cuts and destroys it, and the bacterium survives to reproduce.

The reason we hear so much about CRISPR today is because researchers (Martin Jinek, Krzysztof Chylinski, Ines Fonfara, Michael Hauer, Jennifer A. Doudna, and Emmanuelle Charpentier) realized that this DNA identification and disabling mechanism could be re-purposed to make customized changes to the DNA of almost any organism. Mugshots (guide sequences, from known bacteria or newly made) could be combined with scalpels (nucleases encoded by Cas sequences, of which many are now known and more being constantly discovered) to make precise changes to DNA sequences at specific locations with very little potential for non target effects.

This insight was published in 2012, and researchers around the world quickly realized its potential. The first applications involved the easiest edits – short deletions to turn off (“knock out”) the expression of specific genes to produce, for example, mushrooms, potatoes, or apples that don’t brown when exposed to oxygen. But researchers are quickly learning to do the other kinds of things  common to editing programs, to cut and paste DNA pieces of varying sizes from one location to another, and it is rapidly becoming routine to insert substantial sequences of DNA from other organisms just as with classical transgenics, (commonly known as “GMOs”).

The importance of this discovery is difficult to overstate. What it means is that we now have the ability to make precise and specific changes to an organisms genetic code almost at will.

Here is a scratch-the-surface list of things researchers have done or are doing using CRISPR:

But some wonder, are gene-edited plants and animals GMOs? This is important because some countries (in particular, the European Union) have burdensome regulations for “GMOs” that vast experience has shown are not only unjustified, but in fact, counterproductive – not only do they not protect against any risks, they prolong reliance on older, obsolete, and less sustainable technologies for plant and animal improvement. This benefits no one but the special interests who either cannot compete or adhere to a retrograde, nostalgic ideology, neither of which is  good for humans or our planet.

To determine whether gene-edited plants and animals are “GMOs” it helps to review what a “GMO” is, and is not. The initials stand for “genetically modified organism” and in common usage it is defined, according to the World Health Organization, “as organisms (i.e. plants, animals or microorganisms) in which the genetic material (DNA) has been altered in a way that does not occur naturally by mating and/or natural recombination.”

As ITIF and others have noted elsewhere, this definition is problematic on multiple levels. On its face, it is scientifically indefensible: every living thing on earth is “genetically modified” in the time honored meaning of the words as they have been in common usage since Bateson coined the term “genetics” in 1905. Indeed, life is all about “descent with modification,” the modifications are genetic, and they are the reason we are all something other than primordial slime.

As if that weren’t enough, the definition posits something even more scientifically indefensible: presuming it describes a class of organisms “that does not occur naturally by mating and/or natural recombination.”

Mating and or natural combination have produced a kaleidoscope of life forms that beggars the human imagination, and nature is constantly producing novel combinations of genes. The blueprint of each life form is encoded in a genome that is plastic and promiscuous to a degree that even the most imaginative biologist would never have guessed before the widespread availability of inexpensive DNA sequencing.  Indeed, the pages of the book of life tell a story of genetic promiscuity, mutation, miscegenation, and gene flow so rampant and ubiquitous as to defy belief were the data not so clear and inarguable. Here is a partial list of the genetic modifications Mother Nature has come up with that we’ve discovered in recent years:

The list of similar marvels goes on and on; indeed, Ed Yong and Carl Zimmer have made a cottage industry re-telling fantastic tales about genetic plasticity and promiscuity rampant throughout the Tree of Life.

How is this relevant? It drives home the insight that any definition of “GMO” that attempts to draw a bright line distinction between what genetic engineers do in a lab to improve plants or animals and that which happens in nature is untenable. Genetic engineers learned how to do what they do in the first place by finding it in nature, where we encounter it in myriad forms everywhere we look. So much for the idea of “unnatural.”

Unfortunately, all this matters little to politicians, particularly in the EU, who have enshrined in law a definition of “GMOs” that bears no relationship with reality, but does placate some noisy vested interests. If the EU were to extend its contrafactual definition of “GMOs” to the products of gene editing then this new and promising technology would be unduly burdened if not stifled, at least in the EU. Fortunately, however, despite predictable pressure from the organic lobby and anti-GMO advocacy groups, substantial resistance to this pressure has developed that may forestall such an ill-considered policy.

Some choose to receive news of these advances with fears of what might go wrong.  But as Pinker has documented, and as Macaulay noted, “On what principle is it that with nothing but improvement behind us, we are to expect nothing but deterioration before us?”

The lesson is clear: instead of worrying about whether gene edited plants and animals are GMOs, we should be asking if the present regulatory regimes for “GMO” plants and animals are defensible, whether they make any sense, whether there is any basis in fact that can possibly justify the enormous opportunity costs they impose. The answer is clearly and unambiguously “No.” So the question becomes, how, and how quickly, can they be set aside?

Val Giddings is Senior Fellow at the Information Technology and Innovation Foundation. He previously served as vice president for Food & Agriculture of the Biotechnology Industry Organization (BIO) and at the Congressional Office of Technology Assessment and as an expert consultant to the United Nations Environment Programme, the World Bank, USDA, USAID, and companies, organizations and governments around the world. Follow him on twitter @prometheusgreen

A version of this article was previously published on the GLP on September 27, 2018 the GLP. It was originally published on the Information Technology and Innovation Foundation’s website as “Gene Editing, GMOs, and Fear-Based Marketing” and was republished with permission.