Disease is the greatest threat to bee health. Can we protect them through genetically engineered probiotics?

This article or excerpt is included in the GLP’s daily curated selection of ideologically diverse news, opinion and analysis of biotechnology innovation.
If you cannot engineer the organism, engineer its microbiome.

Since scientists began exploring how to solve problems using synthetic biology, by focusing on microbial symbionts, a whole universe of possibilities has opened up. We have seen a hangover cure, synthetic probiotics for humans, and even microbes that help plants fix their own nitrogen. Now the focus is on bees to get their engineered probiotic, an idea that may save the insects from disease and insulate consumers from food shortages.

Domesticated bees and other pollinators play a significant role in growing many foods, although how much is debated. A significant percentage of America’s crops — between 7% and 35% — rely to some extent on bees. Wheat, corn and rice are wind-pollinated. Lettuce, beans and tomatoes are self-pollinated. But in some crops, bees are essential. Honeybees have a tremendous financial importance, not only for their honey but as the insects that enable the reproduction of (many) flowering plants. As wild insects cannot be relied upon to pollinate thousands of acres of monocultures, crop producers employ beekeepers to bring their hives close to their plants. This gave birth to migratory beekeeping, a practice now essential for cultivation of plants such as almond trees on a commercial scale.

Honeybees have evolved into a managed livestock, with a complex role in agriculture and established production and management practices. Beekeepers need to maintain healthy colonies. All bee colonies decline significantly in size during the winter months, but overwinter losses have increased over the past 15 years, and now hover around 40%. These persistently high mortality rates have fed inaccurate speculations about the cause, often blaming one class of pesticides, neonicotioids as the primary culprit. The evidence doesn’t support that claim. The driver of bee health problems is known and it’s not pesticides nor agricultural production models; it’s disease.

Honeybees are susceptible to many infections from parasites and viruses. In fact, the co-infection with mite parasites and RNA viruses is particularly destructive for bees and accounts for a large portion of colony losses. The most common external parasites are the Varroa mites (scientific name Varroa destructor), which feed on the fat bodies of the bees. The deformed wing virus is another common hazard. This RNA virus uses the Varroa mites as disease vectors and infects the bee bodies, leading to developmental deformities.

Varroa infection treatment is difficult. Common methods include pesticides – to which Varroa started developing resistance – mechanical screening of bees, as well as teaching the bees to recognize and kill infected pupae. A more selective and effective treatment could save bees and agricultural resources, and this treatment might be already present in the bees’ gut microbiome.

RNA to the rescue

In animals, DNA stores the genetic material, and RNA molecules are short-lived and execute specific functions. Ribosomal RNA has structural role in ribosomes, transport RNA carry amino acids, and messenger RNA carries the information needed to synthesize proteins. In contrast, many viruses carry their genetic information in RNA molecules. To defend against RNA viruses, cells have developed a sophisticated system called RNA interference, or RNAi. This complex molecular machinery recognizes double-stranded RNA and breaks it down.

Bees possess an efficient RNAi machinery that protects them from intruders at a molecular level. And researchers can use this system to protect bees against mites and viruses. If we insert RNA complimentary to the deformed wing virus’s genome, it will form a double-stranded hybrid molecule. The RNAi machinery can now shred the virus genome to pieces, ending thus the virus infection. The same principle can be used to target specific parasite genes. And this brought forth the idea of injecting bees with RNA to protect against Varroa mites.

There are several problems with administering RNA to individual bees. RNA is a notoriously unstable and difficult to administer molecule. The treatment is short-termed. There are off-target effects. And it’s almost impossible to treat entire hives. Ideally, the bees would maintain the ability to produce the suitable RNA for a long time (or permanently), but would express it only in case of infection is happening. In theory it should be possible to insert the RNA gene in the genome of the honeybees under very tight control. In practice, though, this would be extremely tough. But while the process of genetically engineering insects is not very practical, the technology to modify bacteria is quite mature.

Bees, as every organism, have a rich microbiome. It should be possible modify one of these microbes to deliver the RNA cure to its bee hosts. This is exactly the idea researchers from the University of Texas explored in a recent article published in Science. Sean Leonard and his collaborators genetically modified the bacterium Snodgrassella alvi wkB2, one of the most abundant microbes found in the honeybee gut, to continuously deliver double stranded RNA.

The researchers first verified that engineered bacteria can establish themselves in the bees’ gut. They tested whether the modified S. alvi can deliver RNA to their host, and if this RNA can stimulate an RNAi response. As these early experiments were positive, the scientists tried to use the new probiotic to treat deformed wing virus and Varroa mite infections. Their results showed that the administration of the engineered microbe improved survivability, while the microbe by itself didn’t seem to harm healthy bees. 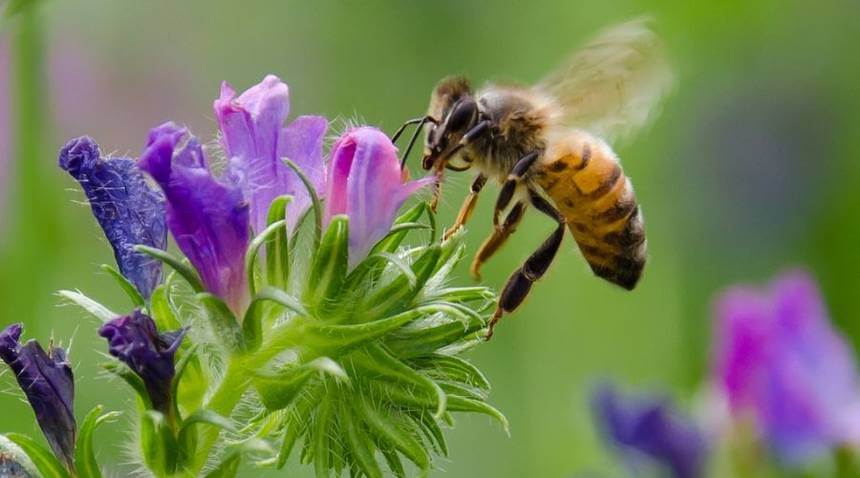 What are the next steps?

This work from Leonard and the rest of the University of Texas team is an encouraging proof of principle. Their study shows that bee probiotics can confer parasite and virus resistance for several days to individual bees, though they don’t show yet if such a treatment will work well on a hive level. Such an approach has the potential to be a versatile and generalized cure: the beekeepers could store and administer specialized probiotics for any possible outbreak. Bee probiotics would be very specific to the disease they teat and they would have minimal environmental impact (contained within the hives and disappearing over time).

Would honeybee probiotics get regulatory clearance? The question is a bit complicated. In the US, they would likely be regulated in same way as engineered human probiotics, which are already on the market. But the honey produced by treated bees and the pollinated crops are in regulatory uncharted territory, so nothing is assured as this issue is more ideological than science-based. The food products are definitely not GMOs — as the bee or crop DNA would not be affected — but regulators might nonetheless under political pressure to require proof about environmental and food safety, even though there is no logical scientific basis for requiring such information as there would be no detectable difference in honey derived from such bees. Most probably, countries with tougher GMO restrictions (such as in the EU) will be as skeptical of probiotics from RNA-modified bees as they are of other genetic engineering technology, and are unlikely to approve them.

Insects are organisms with immense financial, ecological, and social importance. Synthetic biology may provide ways to protect or control insect populations without the use of harmful chemicals, destroying habitats, or introducing invasive species – ways that we currently employ with well-documented consequences. Engineering the microbiome is a way to solve biological problems by bypassing the hurdles of transforming complex multicellular organisms, a back door to make synthetic biology easier. And the honeybee back door is now pried open.