Did COVID-19 escape from a lab?

This article or excerpt is included in the GLP’s daily curated selection of ideologically diverse news, opinion and analysis of biotechnology innovation.
A frenzy of speculation has arisen around the idea that the novel coronavirus responsible for the global COVID-19 pandemic might originally have escaped from a laboratory in the Chinese city of Wuhan.While there is so far no evidence being offered to support this suggestion, the fact that the mere possibility is being reported in mainstream media outlets like the Washington Post and Yahoo News might seem to give credence to earlier conspiracy theories about the virus being engineered in a biowarfare laboratory and deliberately released into the human population.But don’t be fooled. Whether the virus first infected humans at the infamous Wuhan “wet market” or somehow took a more complicated route via a so far unidentified Chinese laboratory, the ultimate source of the novel coronavirus is still the same: wild populations of bats.

None of the current speculation changes the one fact that is established beyond reasonable doubt — SARS-CoV-2 is a zoonotic virus, meaning it came from an animal and jumped into the human population.

It appears that the Wuhan Institute of Virology is currently under suspicion because its scientists were studying bat coronaviruses in order to evaluate the possibility of the emergence of just such a pandemic as is currently underway.

Indeed, it is thanks to their work that we know that SARS-CoV-2 is 96 percent “identical at the whole-genome level to a bat coronavirus” (to quote from a Feb. 3 Nature paper co-authored by the institute’s scientists) and that its most likely original host is the horseshoe bat.

An investigation by the United States military into the origins of the virus, while noting the high degree of “speculation and rumor” around the issue,  concurred that “the weight of evidence seems to indicate ‘natural.’”

That the virus has natural origins is also apparent from its molecular structure. Scientists writing in Nature Medicine journal on March 17 made clear that “all notable SARS-CoV-2 features” were also observed “in related coronaviruses in nature” and that therefore “we do not believe that any type of laboratory-based scenario is plausible.”

As Josie Golding, epidemics lead at the UK-based Wellcome Trust, pointed out: The findings “are crucially important to bring an evidence-based view to the rumors that have been circulating about the origins of the virus.”

In the Nature Medicine paper, the scientists reach the definitive conclusion that SARS-CoV-2 is “the product of natural evolution,” Golding added, “ending any speculation about deliberate genetic engineering.”

Letting Trump off the hook?

Would that it were so simple. All the news reports thus far rely on anonymous sources within the Trump Administration and the intelligence community — and the former have a strong interest in hyping Chinese responsibility in order to divert the spotlight from Trump’s own chaotic, slow and ill-informed response to the pandemic.

A New York Times investigation published on April 11 looked in particular at the role of Matthew Pottinger, a former Wall Street Journal correspondent who is a noted China hawk and now deputy national security adviser in the Trump Administration.

As the NYT reported, Pottinger and colleagues urged the CIA and other agencies to search for evidence that might “bolster his theory” that the “virus may have originated in one of the laboratories in Wuhan studying deadly pathogens” — even though “they didn’t have any evidence” to support such a contention.

The Times report also reveals that “Mr. Pottinger and others — including aides to Secretary of State Mike Pompeo — pressed for government statements to use the term ‘Wuhan Virus’” in order to help seal the impression of direct Chinese responsibility.

This “Wuhan Virus” insult infuriated Beijing, leading one Chinese foreign ministry spokesperson to spin his own retaliatory conspiracy theory about the origins of COVID-19 — that it was brought to China by the US military.

The spat has continued with Trump’s latest move to defund the World Health Organization, ostensibly because it has been too sympathetic to the Chinese leadership, but again, more likely in reality aimed to deflect attention from his own missteps.

Despite these competing geopolitical conspiracy theories, the most likely explanation about the origins of COVID-19 remains the original one: that the virus first spread into the human population of Wuhan from an animal at the city’s notorious “wet market.”

Indeed the Huanan Seafood Wholesale Market had reportedly sold chickens, pheasants, bats, hedgehogs, marmots, tiger frogs and snakes, as well as organs from rabbits and other animals, at some point over the previous months. 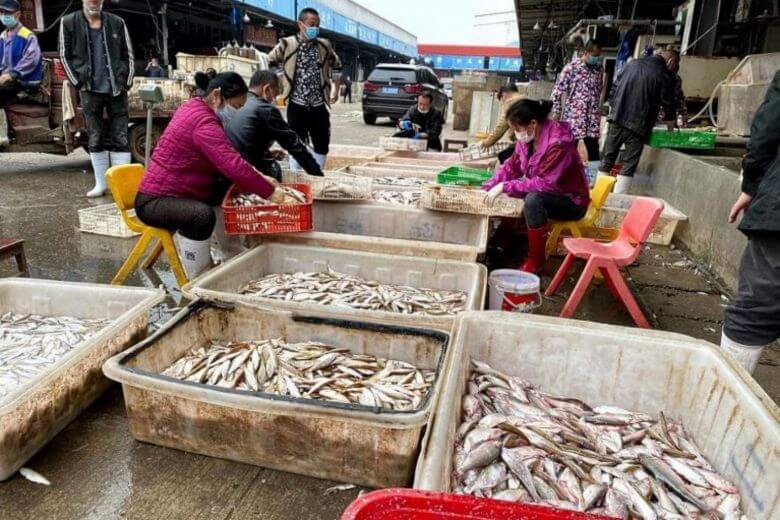 Wildlife markets in China, as elsewhere in Asia, are notorious for keeping endangered and wild animals in close-confined unsanitary conditions that provide an ideal breeding grounds for germs and an easy route for viruses circulating in wild animals to infect humans via urine, feces or blood as they are butchered.

While bats are consumed in China and may have been sold in the Wuhan wet market, it seems unlikely that SARS-CoV-2 jumped directly to people from wild bats. An “intermediate host” was probably involved in the virus’s evolution into a form more adapted to humans.

This was also the case for previous coronavirus epidemics: the earlier SARS and MERS epidemics, respectively, had civet cats and camels as intermediate hosts. Currently pangolin — a scaly mammal endangered in the wild but often sold in Chinese markets — is the leading contender.

This has led to calls from over a hundred conservation charities to close wildlife markets and stop bushmeat consumption throughout the world, and to do so permanently — both to protect animals from hunting, poaching and other exploitation and to reduce the potential for the next pandemic.

After all, it is not only coronaviruses that have zoonotic origins. Ebola is likely to have infected humans from gorillas butchered in the forests of central Africa, while HIV is thought to have crossed into humans from chimpanzees, again probably when they were slaughtered for meat.

Protecting endangered wildlife could therefore not only support biodiversity goals, but help humanity avoid the next global pandemic. With tens of thousands already dead and trillions of dollars wiped off the global economy thanks to COVID-19, the impacts of pandemics are surely too disastrous to allow conspiracy theories to derail a proper evidence-based global response.

This article originally ran at Cornell Alliance for Science and his been republished here with permission.