GLP Team | May 5, 2020
This article or excerpt is included in the GLP’s daily curated selection of ideologically diverse news, opinion and analysis of biotechnology innovation.

Who is David and who is Goliath when it comes to the GMO debate? Anti-biotech activists have long maintained that the agro-chemical industry, led by Monsanto, is a financial and political juggernaut, flooding the media with propaganda and pulling political levers to maintain support for GMOs despite public skepticism. They claim they are fighting a biblical-level battle against “industry” propagandists tied secretly to the US government, as this article in EcoWatch attempts to document.

But a year-long Genetic Literacy Project investigation culminating in the rollout of the Anti-GMO Funding Tracker suggests that this framing is more self-serving and ideological than factual. An exhaustive review of close to a decade of foundation and environmental NGO tax records indicates that anti-biotech advocates spend far more on GMO activism than companies or trade associations linked to the biotechnology industry—so-called ‘Big Ag.’ The research also uncovers a vast interconnected network of foundations funding anti-GMO activities—and many of the foundations support advocacy groups whose activities are in direct conflict with their stated mission to advance empirical science.

For nearly 25 years, anti-GMO activists have positioned themselves as advocates for the consumer in the face of what they claim is Big Ag’s propaganda machine. They allege that foods grown from genetically modified or gene-edited seeds⁠ and the chemicals used to help grow them cause dozens of diseases including autism, autoimmune disorders, food allergies, Alzheimer’s, Parkinson’s and even cancer. They also claim conventional farming, which in the US and numerous other countries relies on genetic engineering to produce commodity crops, poses ecological hazards.

The activists include well-known environmental organizations for which anti-GMO advocacy is just a part of their portfolio, such as the Environmental Working Group, Center for Food Safety and the Natural Resources Defense Council. Then there are the dedicated anti-GMO gadflies such as US Right to Know (USRTK), Just Label It!, the Organic Consumers Association and the Non-GMO Project, whose primary purpose is to demonize crop biotechnology. What they all share in common is a narrative in which they are “Davids” waging an uphill battle against deep-pocketed agri-business “Goliaths.” 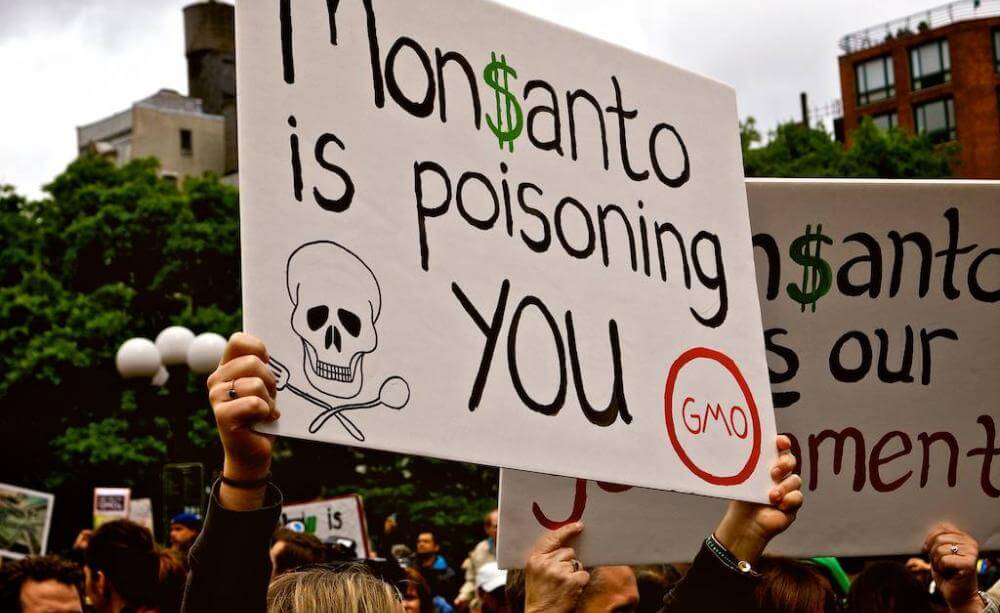 For years, the central target, some say bogeyman, was Monsanto (now owned by Bayer), which activists claim has been waging an expensive public relations campaign to discredit its independent, grassroots critics in the organic food and environmentalist movements, and by extension threatening the global food supply. Any scientist, journalist or publication they saw as supporting conventional agriculture or cutting-edge biotechnology was fingered as part of the Goliath-attacks-David disinformation machine, and labeled a “Monsanto shill.”

The anti-biotech documentary Seed, which was made with the help of high-profile activists including anti-globalization campaigner Vandana Shiva and Center for Food Safety founder and director Andrew Kimbrell, typifies this line of attack:

As biotech chemical companies control the majority of our seeds, farmers, scientists, lawyers, and indigenous seed keepers fight a David and Goliath battle to defend the future of our food. In a harrowing and heartening story, these heroes rekindle a lost connection to our most treasured resource and revive a culture connected to seeds.

…[T]he [biotech] companies pay millions of dollars a year to lobby politicians; conservative thinktanks combat any political opposition; the courts enforce corporate patents on seeds; and the consumer is denied labels or information.

Such rhetoric has successfully seeded doubt about the safety of GMO-derived foods and the integrity of crop biotech researchers among the US public, in sharp contrast to the scientific consensus. Close to 300 international science research and regulatory agencies have issued statements endorsing the safety of biotech crops; not one mainstream research or regulatory group has asserted that crops grown from genetically engineered  seeds pose any unique health hazards. But the public, which often relies more on Google than scientists to ‘research’ food issues, remains skeptical.

In December 2016, for example, a Pew Research poll undertaken with the American Association for the Advancement of Science found some 57% of Americans believed that GM foods were unsafe and a startling 67% did not trust research scientists who worked in the field. 88% of AAAS scientists, meanwhile, said genetically modified crops were safe. Those most skeptical of GMO-derived foods were younger people heavily influenced by activist group campaigns.

But who is the real Goliath? While the biblical narrative has helped the anti-GMO movement sell its message to the public, a year-long, independently financed research project by the Genetic Literacy Project indicates that the story is hindered by a critical flaw—it’s not true.

As detailed in the GLP’s Anti-GMO Advocacy Funding Tracker, wealthy foundations and organic food companies invested nearly a trillion dollars during the 5-year period from 2012-2016, and well more than a billion dollars over many years, funding advocacy groups that campaign against agricultural biotechnology, lobby politicians in Washington and fund research designed to promote their pro-organic messaging. When put in their proper context, the funding and lobbying efforts of the anti-GMO movement outpace any attempt by the biotech industry to promote its products. 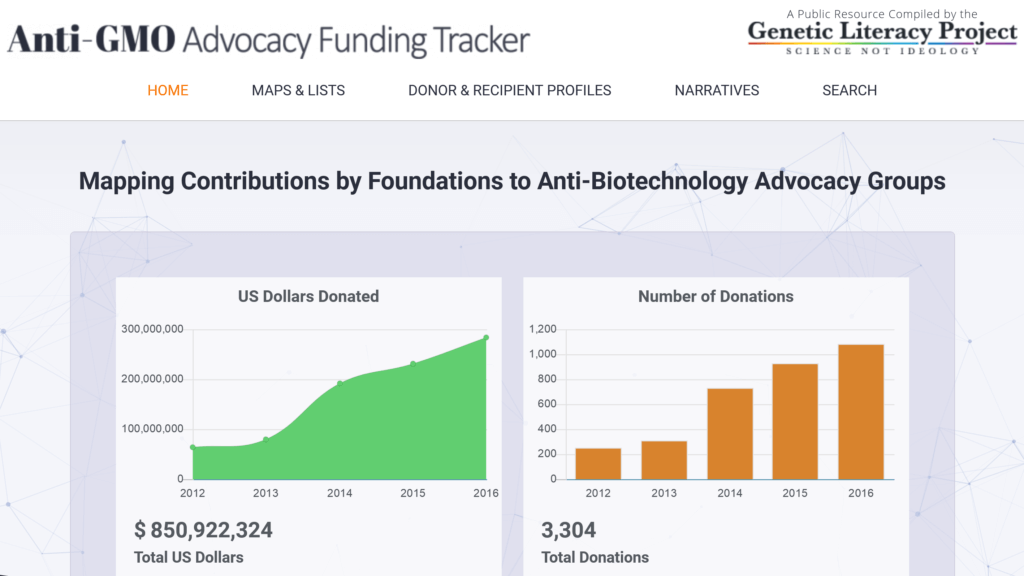 How to use Anti-GMO Advocacy Tracker for research

The advocacy tracker provides a variety of powerful tools to help consumers, journalists and policymakers evaluate who funds and engages in anti-GMO advocacy. The project includes exportable financial data based on tax documents and annual reports from the organizations. It also features detailed profiles of the 50 largest and most influential donors and recipients, which document how much money individual groups receive and what they spend it on.

To illustrate the deep web of relationships between anti-GMO foundations and advocacy groups, the tracker is built around an interactive network map that highlights the intricate relationships between granting foundations (yellow circles) and advocacy groups (blue circles). Researchers can generate maps focused on specific years or ranges of years and by rankings, say the top 10 or top 50 donors or recipients. 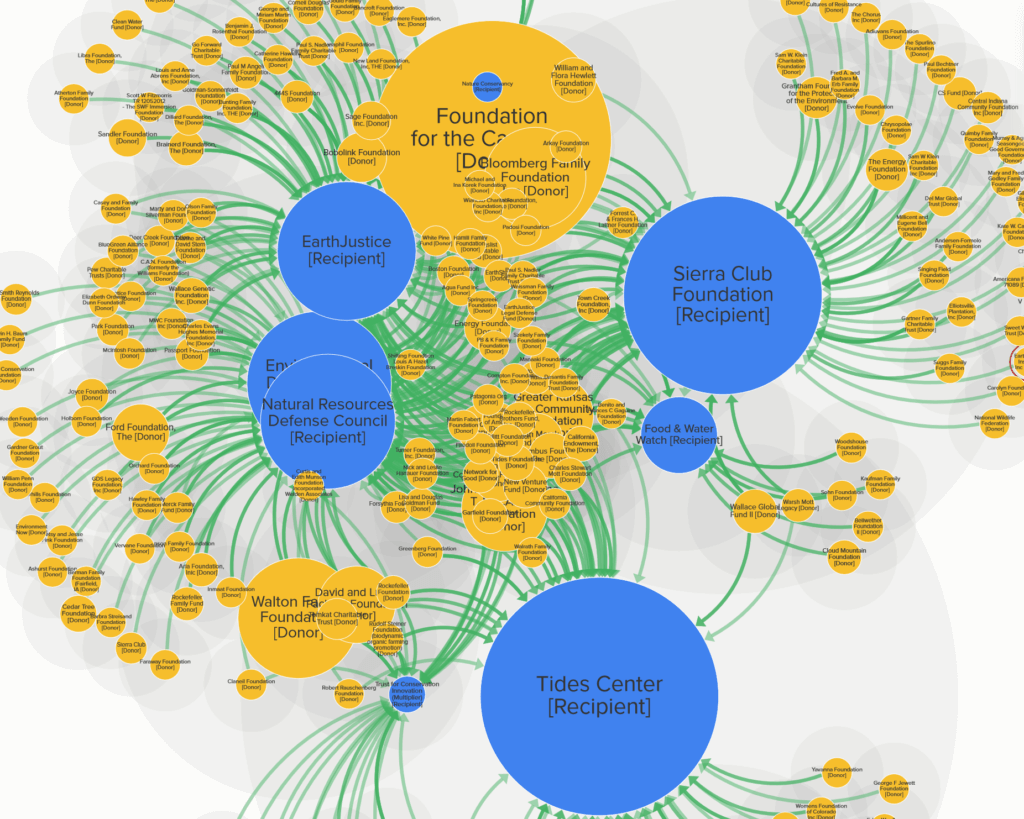 The map above depicts the top ten recipient organizations between 2012-2016. Mousing over any circle will reveal which donors have contributed

the most money to the organization over that five-year period; clicking on the same circle will call up a summary box documenting the individual donations, and a link to a profile highlighting an organization’s anti-biotech advocacy, such as US Right to Know featured here.

Working with the map above, we can discover, for instance, that the Sierra Club Foundation— “the Sierra Club’s fiscal sponsor”—has received over $100 million in tax-exempt donations between 2012-2016. Much of these contributions came from high-profile donors including the Bloomberg Family Foundation ($41 million) and John D. & Catherine T. MacArthur Foundation ($10 million), as the Sierra Club’s snapshot shows. Investigating the profiles of those two donors shows other advocacy groups they’ve contributed to over the years.

One of the most striking findings is that many such large donor organizations, Bloomberg Philanthropies included, consider themselves strong supporters of mainstream science education. Yet, they provide sizable contributions to organizations (Sierra Club, NRDC, Ceres Trust) that regularly present distorted information about crop biotechnology, and often attack researchers and science journalists working in and covering the field.

The ideological debate over crop biotechnology escalated during the 1990s, which raises an important question about the tracker: Why does it focus on a 5-year period beginning in 2012? The answer is that the anti-GMO movement emerged during that time to became a potent political force, drawing an unprecedented level of attention from the mainstream press and the public. These five years represent the height of the ‘war’ between anti-GMO activists and those defending agricultural biotechnology.

2012 saw the publication of French scientist Gilles-Eric Séralini‘s incendiary study alleging that GMO corn treated with the herbicide glyphosate caused monstrous tumors in rats. The study was sharply criticized by independent experts and food safety officials, and eventually retracted by the journal that published it. But Séralini’s work, later republished in a predatory pay-for-play journal popular among anti-GMO activist-scientists, crystallized the GMO safety concerns of many consumers and prompted several African countries to ban biotech crops, only intensifying the already severe food insecurity threat on the continent.

As the GLP tracker notes, 2012 also marked the beginning of a coordinated effort by anti-GMO groups and organic food companies to enact state-level initiatives mandating labeling of products made from biotech crops, the goal being to stigmatize and ultimately drive these items off grocery store shelves, according to the Organic Consumers Association. Most of these initiatives failed. The federal government stepped in to propose national labeling guidelines, setting off yet another expensive lobbying and internet propaganda war between activists and pro-biotech organizations.

The anti-GMO debate then entered another intense phase beginning in March, 2015, when a sub-agency of the World Health Organization, the International Agency for Research on Cancer (IARC) issued a report (also published in medical journal the Lancet) that re-classified the weedkiller glyphosate as “probably carcinogenic to humans.” That conclusion contrasted sharply with evaluations by more than fifteen independent regulatory agencies across the globe, including two WHO sub-groups and WHO itself, which concluded that glyphosate was not a carcinogen. Many of these evaluations sharply criticized the methodology and conclusions of the IARC panel.

But the IARC analysis was seized on by activist groups, who used it as part of their attack campaigns against Monsanto, which originally introduced glyphosate under the trade name Roundup in the 1970s. It later developed GMO crops engineered to withstand exposure to the herbicide, sparking spectacular growth of the crop biotechnology sector beginning in the mid-1990s. IARC’s report also became the major driver of activist propaganda and fundraising efforts, as the GLP tracker documents.

The ongoing attacks against glyphosate culminated in the filing of tens of thousands of lawsuits alleging that the herbicide causes cancer. Three suits have resulted in verdicts awarding the plaintiffs hundreds of millions of dollars. Bayer has appealed all of them, and the legal battle over glyphosate continues, but the lawsuits have had a resounding impact on public opinion.

What are the takeaways from the GLP Anti-GMO Funding Tracker?

A number of crucial questions and observations arise from this massive latticework of donor-activist relationships beyond the David vs. Goliath myth. There are many ‘stories’ embedded in this data. The GLP has suggested a few of them in the narrative section of the tracker to help the public and policymakers better comprehend the GMO debate: