Viewpoint: Norman Borlaug knew technology could fight hunger. In the biotech age, we ignore his wisdom at our peril

The recent PBS documentary on Dr. Norman Borlaug, titled “The Man Who Tried to Feed the World: A Tale of Good Deeds and Unintended Consequences” has caused an unexpected kerfuffle, with shouts and punditry from both critics of the Green Revolution and defenders of Borlaug.

It’s easy to scapegoat. It’s hard to focus on the tangle of issues that keeps some people poor and hungry in a relatively well-fed world. Borlaug always focused.

Like the pandemic we are now battling, population growth is an exponential process that can get away from you. By the middle of the 20th century, pundits like Paul Ehrlich were claiming that the battle to feed humanity was over and untold millions would starve because the capacity of the Earth to produce food had been exceeded. Ehrlich called it the “population bomb,” as if it were a singular event, over and done, then it’s too late because there isn’t enough food.

But it’s not a bomb. It’s a process out of balance. Borlaug gave governments the time – decades – to restore the balance between food and population.  Here’s how he did it, amply earning and richly deserving his 1970 Nobel Prize. Like all great scientific achievements, Borlaug’s came from a combination of insight, work, and sheer luck.

Borlaug’s modest goal when he began his work on wheat in Mexico in 1945, funded by the Rockefeller Foundation, was to increase the ability of the local wheat varieties to resist the fungus (stem rust) that decimated much of Mexico’s wheat crop annually.

Borlaug wasn’t a wheat breeder, but he was a man in a hurry. Ignorant of the fact that he was committing plant breeding heresy, he took the seeds from the few rust-resistant survivors of his first collection of strains from every source he could tap to the northern part of Mexico, where he could grow a second crop in the same year. Unknowingly, he was selecting photoperiod-insensitive mutant plants – plants that didn’t care how long the days were before they flowered and set seed – making it possible to grow them in different geographies.

Within a few years, he had developed varieties that could survive the rust and give a good yield, only to discover that when the plants received adequate water and fertilizer, they grew so tall and top-heavy that they were easily blown over by wind, not infrequently destroying the crop. He searched for dwarf plants that he could cross with his high-yielders, but found that genetic mutations that dwarfed the plants generally dwarfed the yields as well.

A visiting breeder told him about an odd Japanese dwarf wheat variety called Norin 10 that a U.S. wheat breeder had obtained from Japan after World War II. Borlaug wrote him, obtained a few dozen seeds and planted them, only to have the stem rust kill every plant. To his surprise, he discovered that he’d left 8 seeds in a small packet tacked to a wall in a tarpaper field shack that was to be torn down for a new building. He grew each in a separate pot in the new building’s basement under lights and, protecting them from the rust, crossed each by hand to some of his most rust-resistant plants.1

Of the thousand seeds he harvested, only 50 grew into plants that survived the rust, but each of these was a dwarf and unexpectedly produced lots of seeds. Although it took another 5 years of breeding to perfect the rust resistance, taste and milling qualities of the new variety, these few plants were the start of the yield revolution that eventually quadrupled and quintupled wheat yields, first in Mexico in the 1960s, then later in India and Pakistan.

Borlaug’s brilliant insights were double-cropping and dwarfing, his incredible focus and hard work are a matter of record, and then there’s the extraordinary luck. Let us explain. 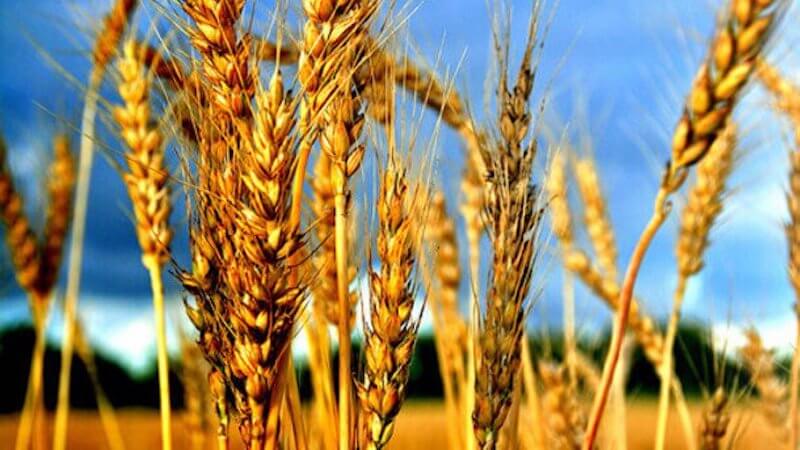 Wheat is an ancient, spontaneous hybrid that crossed genus and species barriers, keeping all of the chromosomes from all 3 of its parents. This means that every plant has 3 similar versions of every gene. In the Norin 10 dwarf, 2 of the three versions of a gene that controls stem growth are mutated, meaning that they don’t work like they’re supposed to. The protein these genes code for normally inhibits plant stem growth until it gets a hormone signal that activates its destruction, letting the stems grow. But in Norin 10, two of 3 genes are altered (mutated) in such a way that the protein resists destruction and continues to inhibit stem growth, giving the dwarf stature.2

This also means that the dwarfing trait is dominant, which facilitates the wheat breeder’s job, because all the seeds with the mutant genes grow into dwarf plants. Unexpectedly, it also turned out that the energy that would have gone into making very tall plants went instead into making more wheat grains, increasing yield. Finding and using just this mutant was a monumental stroke of luck.

Even as he successfully fought political battles so that farmers could take advantage of his extraordinarily productive mutant wheat varieties, Borlaug knew that all he had done was to buy time for governments to tame what he called the “population monster.” And he said so at every opportunity. Governments haven’t used the time Borlaug gave them as wisely as they might have and the consequences are manifest both in the over-exploitation of land and water resources and in continuing rural poverty.

Borlaug knew that population growth didn’t stop on a dime and devoted much of the rest of his life to the only humane ways of changing human reproductive behavior: development and education, particularly of women. And he never lost his focus on increasing agricultural productivity. He became an ardent supporter of the revolution that was taking place in agriculture. In the years that followed the Green Revolution, plant science blossomed and knowledge of how plants and their genes work accumulated rapidly.

With that knowledge came the ability to alter plant genes directly using molecular tools to improve crop plants’ ability to protect themselves from diseases and pests. Curiously, crops modified by molecular techniques are the only ones that are called “genetically modified organisms (GMOs)” today, even though crop domestication and improvement all happen through genetic changes (mutations). While GMOs have substantially increased crop yields and farmer incomes, they’ve also been vilified much as the Green Revolution has been.3

Fed by a growing nostalgia about the wisdom of traditional farmers, “natural” crops, and “organic” farming, Green Revolution critics promote farming practices that can’t produce enough food to feed the world today, much less the expected extra billions of a few decades hence. As we’re learning from the harsh scientific realities of a pandemic that can’t be wished away, food “security” isn’t a sure thing. Today, sudden poverty can pitch anyone into hunger.  Tomorrow we face a warming climate that can crash crop yields.

We ignored our experts and our public health system wasn’t prepared for a long-predicted pandemic. And we ignore Borlaug’s wisdom about food and population at our peril. The breeding practices that brought Borlaug success have done what they can, yet can’t assure crops yields to feed an even modestly larger population as the climate grows harsher. Nor will the critics’ nostalgia about traditional crops and farming methods make up the growing shortfall.

It’ll take cutting-edge science and adequate investment in agricultural research, just the lessons we should be learning from the COVID-19 pandemic. And most of all, we need our politicians around the world to follow the science and not listen to a vocal minority magnified by social media.

A version of this article was originally published at Agri-Pulse and has been republished here with permission. AgriPulse can be found on Twitter @agripulse.