Infographic: Why are women less likely to die from coronavirus?

Gender-specific observations and implications for COVID-19 paired with global reported cases indicate men are 50% to 80% more likely to die of Covid-19 (following a diagnosis) than women. Are men more susceptible to an increased severity of infection or are women more immune? New study addresses the disparity.

Women – Research states that in general there exists gender based differences in the way the human body fights off infections. For instance, X chromosome carries the largest number of immune-related genes in the human genome contributing to female’s superior immune response. It however also puts women more at risk for autoimmune diseases such as rheumatoid arthritis and Crohn’s disease. Additionally hormones influence the immune system and response, and estrogen in the case of women, help provide a more effective defense.

In countries like Iran, China, Italy, and South Korea where fewer females have contracted the virus, the female smoking rates are much lower than males. A recent COVID-19 study on 20th March mention that “Smokers contract more respiratory ailments, including colds (commonly rhinoviruses, but also coronaviruses) than non-smokers.” 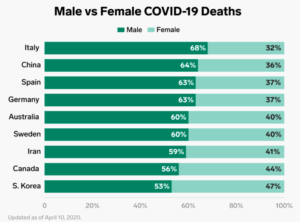