Lefty or righty? Is handedness genes or chance?

Four of the last 6 presidents are left handed.

Where does handedness come from? Why are most people right-handed but about one in 10 go against that tide and use their left hands for most handy activities—hand-writing, for instance?

The answer goes back a very long time. We are part of an enormous group of animals that appeared more than half a billion years ago, the ones called bilaterally symmetrical. We think of that as meaning we are the same on both sides, but appearances can be deceiving. Despite our left and right arms and legs, kidneys and lungs, we are at heart not rigidly symmetrical at all. Neither are many other bilaterians.

The fossil record for the genus Homo shows that a strong preference for the right hand has been with us for at least half a million years. That preference may have begun much farther back. The evidence from our kin, the other primates, is much disputed, partly because most of it comes from captive animals. But most other primate species tend to be right-handed, especially for manipulative tasks requiring some skill. This preference is nothing like as strong as it is in Homo sap, though, and many individual primates seem to have no preference at all. There are also some primate species that are largely left-handed.

The weak preference for the right hand in our primate kin suggests evolution has helped each of us decide which way to go. Most of us go along with the crowd, but some are those those kids who require specially configured scissors in elementary school. And an enviable very few become those rare phenoms who who can throw a ball well with either hand.

Handedness is a genetic trait

In a review published in 2015, three German cognitive neuroscientists declared flatly “Handedness is a genetic trait.” The idea that genes figure in handedness has been around for a long time, and there’s supporting evidence from family and twin studies.

At one time there was hope for finding a single gene responsible for hand preference. That notion has receded, perhaps as part of the more general painful realization that no complex behavior can be explained by just one thing, be it genetic or environmental. An even more compelling reason is the repeated failure to find such a gene. The German researchers observed, “there are several recent studies suggesting that handedness may not be a monogenic but instead a multifactorial trait that is determined by multiple genetic and environmental factors.”

This could help explain an evolutionary puzzle about left-handedness that has always plagued single-gene theories. If handedness is due to a single gene and right-handedness dominates so strongly in our species, why hasn’t left-handedness disappeared altogether? But if many genes are involved—one estimate puts the minimum for handedness at 40 and there could be many more—a trait will be much harder to erase.

The paper from Germany was just one of a number published in recent years concluding that handedness doesn’t fit any simple model. For example, British scientists reported on a genome-wide association study of nearly 4,000 twins. It provided little support for simple genetic theories about handedness. The researchers found no link to specific genes. They noted, “the most parsimonious conclusion from our study is that individual genetic factors responsible for handedness variation are likely to be of weak effect.”

The case against single-gene theories was summarized in another paper by the same British scientists, who mulled over the results of more than 30 genome-wide association studies. The total number of study subjects was enormous: nearly 5500 left-handers and just under 50,000 right-handers. Researchers have found no single autosomal locus associated with handedness.

That doesn’t mean no genes that influence handedness will ever be firmly identified. Specific genes have been linked to handedness in other studies, and some seem worthy of further investigation. The German researchers discussed a handful of them in their paper arguing for the multifactorial view of handedness—although they also noted, “the modest sizes of the observed effects suggest that it is likely that several other, as yet uninvestigated, genes may play a role in handedness inheritance.”

One gene of particular interest is PCSK6. The gene is known to help determine development of left/right asymmetry in bilaterians as distantly related as snails and vertebrates, researchers based at Oxford say. Disruption of the mouse version of this gene causes defects in development of normal asymmetry in mice. For example, their organs form on the wrong side. The researchers say, “Our findings lead us to propose that handedness is a polygenic trait controlled in part by the molecular mechanisms that establish LR body asymmetry early in development.”

Among their findings is their identification of a PCSK6 mutation in more than 700 human subjects with reading disability. This is another piece of evidence in the hypothesis that our strong tendency to right-handedness is somehow related to a quintessentially human trait: language.

Scientists have known since the 19th century that human language is managed largely by the brain’s left hemisphere, which controls the right side of our bodies—and, therefore, our right hands. That brain specialization is one of many manifestations of the true asymmetry hidden beneath the superficial symmetry of bilaterian bodies. 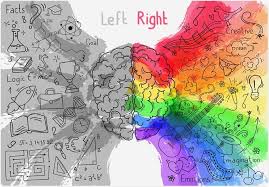 But as Michael Corballis points out in a nice explanation of the relationship among handedness, brain assymetry, tool use, and language, brain specialization is not uniquely human. (This paper, published in 2016 by PLOS Biology, is free to read and highly recommended.)

Left–right asymmetries of brain and behavior are widespread among vertebrates and invertebrates, he notes. Marine mammals and some primates exhibit a strong left-hemispheric bias for action dynamics, “and the left-hemisphere action biases in humans, perhaps including gesture, speech, and tool use, may derive from a common precursor.”

This suggests an explanation for the uniquely dominant right hand among humans, especially for fine manipulation and skilled tool use: that it is tied to another uniquely human feature, language. Both are usually managed by the left brain. It also suggests that human language may have evolved not from primate vocalizations, but from primate communication via gesture.

Alas, nature is not so neat. Nearly all right-handed people are also left-brained for language–but so are some 70 percent of left-handed people. Well, dang. A good theory down the drain?

Not necessarily. Corballis summarizes the possible role of a few genes, including PCSK6, but notes that only about a quarter of the variation in handedness is estimated to be due to genes. What current evidence most strongly suggests, he says, is that the relevant gene(s) do not influence whether a person is right- or left-handed. Instead, the genes determine whether the default human tendency to be right-handed will be expressed or not.

“In those lacking the ‘right shift’ bias, the direction of handedness is a matter of chance; that is, left-handedness arises from the lack of a bias toward the right hand, and not from a ‘left-hand gene.’” That idea can even explain the relationship between handedness and brain asymmetry—and left-brain dominance for language among left-handers—if the same gene or genes are involved.

If in some people the genes don’t care which hand is dominant and which side of the brain manages speech, then it’s a matter of chance (and/or a matter for some environmental influence, also a matter of chance) whether the human default model of left-brain management of speech and right-handedness takes effect or not. Corballis concludes, “It now seems likely that a number of such genes are involved, but the basic insight that genes influence whether or not a given directional bias is expressed, rather than whether or not it can be reversed, remains plausible.”

Tabitha M. Powledge is a long-time science journalist.  She also writes On Science Blogs for the PLOS Blogs Network. Follow her on Twitter @tamfecit