How GMO, gene-edited crops can keep cancer-causing heavy metals out of staple foods

This article or excerpt is included in the GLP’s daily curated selection of ideologically diverse news, opinion and analysis of biotechnology innovation.
One of the most pressing issues in public health is the presence of toxic elements in food, which potentially risk the health of millions of people. The presence of toxic elements like arsenic, cadmium, lead and mercury especially in rice and rice-based food products is a serious concern, which requires urgent public policy attention.

Arsenic, a class I human carcinogen, is found in substantial amounts in rice grown in South East Asian countries like  India, Bangladesh, parts of China and The United States. A recent investigation of baby foods from major manufacturers in The United States found that 95% contained lead, 73% contained arsenic, 75% contained cadmium and 32% contained mercury. About 25% of food tested contained all four toxic elements, though at levels that are unlikely to pose a risk to human health. Nearly 75% of samples tested in Australia contained inorganic arsenic exceeding the EU maximum safe limit for infants and children. These figures are, however, very limited, if not entirely unavailable, for southeast  Asian countries, where exposure to heavy metals is thought to be worse and may justify calls for urgent regulations.

While heavy metal-contaminated grains remain a serious global health concern, recent plant breeding advances, both in genetic engineering and gene editing, are allowing scientists to develop crop varieties that contain very low levels of potentially harmful heavy metals. Rice with low amounts of arsenic has already been produced, and other crops such as mustard could reduce consumer exposure to selenium, though strict regulation may keep these improved varieties off the market. 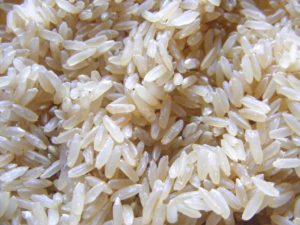 The exposure to arsenic can negatively affect the developing brain and IQ in children. The accumulation of toxic elements like arsenic in the adult body can result in a variety of diseases including cancer, cardiovascular diseases, skin lesions and birth defects in newborns. The concentrations of inorganic arsenic in many Bengal (India) and Bangladeshi rice varieties may often exceed 0.2mg/kg, the safe limit proposed by the Codex Alimentarous Commission, and the total arsenic can be as high as 1.7 mg/kg in a few varieties.

Research suggests that the concentration of inorganic arsenic in rice varieties will increase two fold as climate change continues. Given the magnitude of this problem, it is surprising that no regulations to contain toxic elements, especially arsenic in rice and rice-based foods, exist in countries like India and Bangladesh. Although the US and EU have enacted regulations to control toxic elements in food, and most foods pose minimal risk in this regard, several studies have shown that arsenic and lead can be toxic at very low concentrations. Regulators therefore should ensure that safe limits are gradually brought down to further protect public health.

So how do toxic elements like arsenic end up in our food? What options do we have to minimize them?

It turns out that arsenic and other toxic elements are naturally present in soil and ground water. In some regions of the world, like those mentioned above, they occur in greater concentrations than in others. When crops grown in those soils are irrigated with contaminated ground water, plants end up absorbing these toxic elements from the soil and water. Plants then transport these elements from their roots to their grains, the edible parts. As rice cultivation requires huge volumes of water, it creates an essentially anaerobic environment in which arsenite, the most toxic form of arsenic, becomes more readily available for absorption.

For this reason rice is especially good at absorbing arsenic. Although most of the arsenic from rice grains can be removed by polishing, the growing preference for brown rice among consumers and the wide use of rice flour in baby food preparation mean we must find an alternative and effective solution to arsenic contamination.

To minimize toxic elements in our food, we may not have to look beyond the plants which accumulate them. Since these elements are toxic to plants themselves, they have developed mechanisms to restrict and actually flush out toxic elements in vacuoles, the dumping grounds in plant cells. Some minute quantities can  escape and reach the grains, which are still toxic to humans.  But it turns out that different varieties of rice vary in the amounts of toxic elements they allow to reach the grains, and some varieties like Basmati and other scented rice varieties allow only very minute quantities to reach their grains, thanks to their genes.

After arsenic and other toxic elements gain entry into the plant system through channels in plant membrane – a kind of pores which allows nutrients and other substances to pass across, they form complexes with a type of molecules called phytochelatins (PCs). These complexes are then dragged along and flushed out in vacuoles by some transporter genes- genes that help transport substances across biological membranes.

Examples of such genes in rice and other plants include some ABC transporters, named so because they use energy from ATP hydrolysis to function and MATE (Multidrug And Toxic Compound Extrusion proteins) genes, the same class of genes which are sometimes responsible for antibiotic resistance in bacteria.

One simple strategy to breed arsenic tolerant rice is to identify novel versions of these genes from available germplasms and transfer them to high-yielding rice varieties by artificial pollination and using DNA markers for selection. The advantage of this approach is that the varieties developed require only the same level of regulations applied to traditional varieties.

A more radical approach is to genetically modify rice using genes from arsenic-resistant bacteria and other species. Some species of bacteria and fungi which dwell in arsenic-contaminated soils have developed resistance to arsenic. Scientists can splice out specific genes from those microorganisms and transfer them to food plants using the methods of genetic engineering. It is also possible to up regulate or down regulate specific genes such that their activity is either enhanced or suppressed, respectively. Scientists have, for example, observed markedly less accumulation of arsenic in rice by expressing genes from Ceratophylum demersum, an aquatic arsenic accumulating plant. However, high-yielding rice varieties with low arsenic accumulation- GM or conventional are hardly available for cultivation.

One issue with GM crops is that strict regulation  delays their introduction. It can take nearly a decade and cost more than $100 million to bring a GM crop to market. Although low arsenic accumulating GM rice is an important development, given the current levels of regulations required, it may make more sense to develop varieties by transferring genes from sources of the same species. Our effort for GM rice with less arsenic accumulation and exploring newer technologies such as gene editing, however, shall continue. Gene editing can get around some of the issues with GM technology as gene editing without the introduction of foreign DNA seeks to introduce changes in the genome in a short term that can also be achieved by conventional breeding in a long term.

In the end, it is the role of policy makers to ensure that adequate safety standards are maintained and the current safe limits of toxic elements in food are gradually brought down to even lower limits to ensure greater protection. The presence of toxic elements in more and wider varieties of food and food products should be investigated. Rice and rice-based products should remain a priority. Meanwhile, we must direct more resources to develop varieties of rice that inherently accumulate significantly less arsenic in grains to protect public health around the world.