Viewpoint: Organic food represents a ‘reactionary’ ideology that doesn’t support health or sustainable farming⁠—and should not be subsidized

This article or excerpt is included in the GLP’s daily curated selection of ideologically diverse news, opinion and analysis of biotechnology innovation.
With worldwide sales of almost $97 billion in 2017, “organic” products have won the hearts and plates of many consumers and are indicative of legitimate food concerns. However, the health and environmental benefits it claims are based on shaky scientific foundations. The very philosophy of “organic” is questionable from a methodological point of view.

An analysis of the scientific literature does not demonstrate the superiority of organic agriculture (OA) over conventional agriculture (CA), looking at it on the basis of health, nutrition or sensory appeal.

Pesticides are a necessary evil and OA cannot avoid them, despite normal assumptions to the contrary. The health consequences of “natural” pesticides can prove equally dramatic. For example, rotenone, a molecule extracted from tropical plants, poses an increased risk to those working with it of developing Parkinson’s disease. This “organic” pesticide was banned in 2011. Despite what people may think, pesticides are increasingly being monitored, evaluated and controlled. Just like medicine, pesticides are still essential but should not be used incorrectly.  Instances of pesticide traces in food do not pose a major health risk according to the European Food Safety Authority.

Environmentally, OA and CA come in neck and neck when compared on a per unit produced basis.  In fact, while it is recognized that under equivalent soil and climate conditions, OA tends to be more environmentally friendly per hectare, it is another matter when we take into account the additional area required for “organic” farming, which is much less productive.

“Organic” does not comply in practice with its anti-pesticide and anti-GMO doctrine. OA cannot do without plant protection products, like, for example, copper sulphate, which are “natural” only in name and could even be more toxic than other, synthetic, products. If “organic” producers really refused to grow plants whose genetic material has been artificially altered by humans, they would have to abandon many crops, such as Renan wheat or Camargue rice. 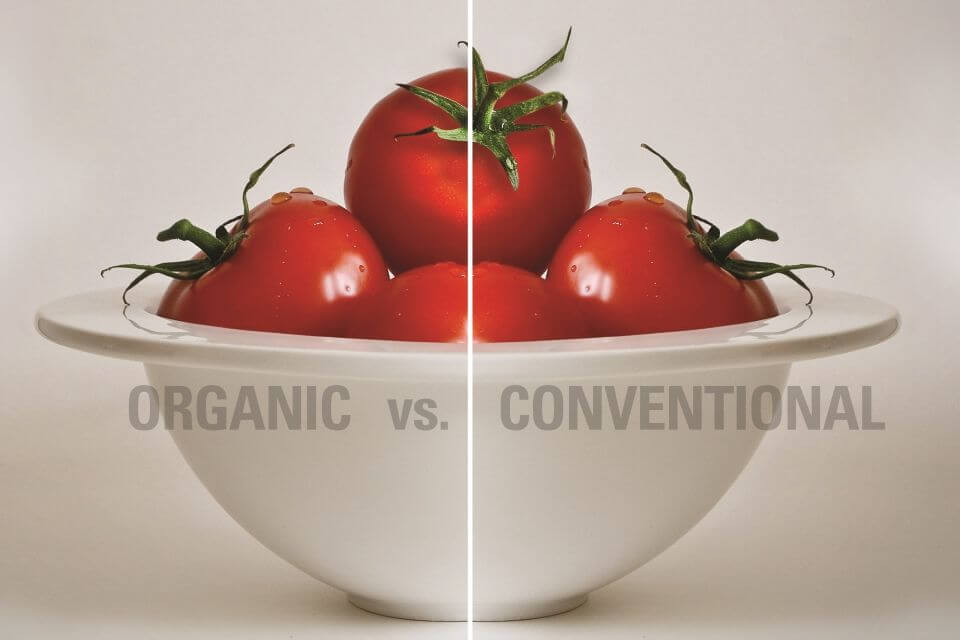 OA is a philosophy rooted in a reactionary and anti-modernist ideology, which was taken up in the 1970s by anti-capitalist and ecological movements. The proponents of “organic” worship all things natural in opposition to anything synthetic, which they consider as inherently bad. This systemic approach is not founded on a scientific approach and becomes incomprehensible, even totally incoherent, when you consider that GMOs are an excellent means of reducing the amounts of plant protection products required.

Despite its agronomic underperformance and well-founded doubts about its benefits, OA receives state subsidies in many countries, particularly in Europe.

In fact, OA operations receive additional subsidies compared to CA. Aid for conversion and maintenance of the common agricultural policy (CAP) and a raft of local subsidies provide a windfall for conversion. While CA is often subsidized, OA is even more so. For example, in its recent report on OA, the Institute for Economic and Fiscal Research calculated that in France, one liter of “organic” milk is subsidized 50% more than conventional milk.

Other countries are less interventionist. The U.S. government offers far fewer subsidies. Across the pond, only 0.6% of agricultural land has been converted, compared with 5.7% in the EU, although the US is the leading consumer market for organic products, ahead of the EU. This significant difference shows that European “organic” production is being kept alive hooked up to a drip of taxpayers’ money.

With resources like this, it would probably have been more relevant to invest in agricultural progress like biotechnology or precision agriculture, which involves using artificial intelligence to prevent plant or animal diseases and optimize input requirements.  These are techniques that offer real ecological and economic solutions, helping to ensure a decent income for producers.

Another form of interventionism are the OA official labels.  Thanks to these, producers can draw on the state’s moral support to boast the so-called virtues of “organic.” This marketing of the appeal to nature and health is based on an intellectual monopoly: the appropriation of the word “organic.” Etymologically, “organic” comes from biology, that is, relating to or derived from living matter – originally from Greek organikos “of or pertaining to an organ,” and taking on the meaning “from organized living beings” in the eighteenth century. But agriculture is a process based on living matter. So it can only ever be considered organic. This would make CA is no less “organic” than OA.

Proponents of “organic” insidiously suggest that CA is inorganic, non-biological, non-living, “chemical” and dead. With a state-sanctioned monopoly on the use of the word “organic,” OA covers itself in the glory of a monopoly of the living and the good, and possesses a powerful anti-competitive instrument that is not based on any coherent scientific consideration.

With everyone free to produce or consume what they want, interventionism in favor of “organic” offers a legal and subsidized income.  In order to restore consumer freedom, it is essential to abolish subsidies specific to “organic,” to privatize the OA labels and abolish the intellectual monopoly on the word “organic.”

The agricultural issue should be depoliticized so that competition, responsibility and innovation can provide consumers with the best possible diet, whether they choose to eat “organic” or not.

This article was previously published on June 25, 2020 on the Genetic Literacy Project.

Laurent Pahpy is an analyst for the Institut de Economic and Fiscal Research (IREF). He writes about economics, technology, agriculture and law. Follow him on Twitter @LaurentPahpy