This article or excerpt is included in the GLP’s daily curated selection of ideologically diverse news, opinion and analysis of biotechnology innovation.
It’s more of the same from the Environmental Working Group (EWG)—cleverly designed but scientifically nonsensical scares. “Organic: The Original Clean Food“ is a magnificent body of work, that is if your goal is to scare and manipulate people into doing something that will provide no benefit other than lightening your wallet. EWG is trying to solve a non-problem—making our already-safe food safe. As usual, the science of their article is ghastly and this is no accident. Here are the authors and their credentials, such as they are.

Now there’s a fine group of people to be writing about chemicals and toxicity. It is not clear whether any of them ever took a chemistry class, let alone, have any expertise whatsoever. And it shows. Let’s dive in.

Americans are increasingly seeking “clean” foods that are free from artificial colors, flavors and preservatives.

That’s true; they are being frightened into doing so by silly scare tactics such as those used in this article.

No artificial preservatives, colors or flavors are ever allowed in organic food.

This statement is based on a fallacy—that there is a difference between a chemical that is obtained from natural sources and the same chemical made in a lab or factory. (See my book Natural And Artificial Flavors: What’s The Difference?). But it’s even worse. Let’s say that you take beta-carotene—a vitamin A precursor that is used to give foods yellow/orange colors—and extract it from carrots or spinach. According to EWG if you make the stuff in a factory it’s less healthy than the beta-carotene from the carrot. Wrong.

What’s more, many consumers are unaware that food companies don’t need government approval for most of the chemicals added to conventional packaged foods.

Here’s a cute half-truth. Food companies don’t need government for most of the “chemicals” added to food because these awful chemicals have GRAS (generally accepted as safe) status from the FDA. EGW is lying when they say that a food company can just start chucking new chemicals or ingredients into a food product. New additives must be evaluated for safety using methods that are similar, but less rigorous than those required for new drugs.

By contrast, only flavors derived from natural, non-synthetic substances can be used in organic packaged food and, beginning in December 2019, natural flavors cannot be used if organic flavors are commercially available.

This rule is magnificently stupid. “Natural, non-synthetic substances,” as I mentioned above, are identical to their synthetic counterparts. No instrument can tell the difference. Your body can’t tell them apart. But it’s OK to use them anyhow if you can’t buy the natural version. Talk about hypocrisy. EWG is implying that the natural substances are safer (they aren’t) but it’s OK for organic food companies to subject consumers to these monstrous chemical assassins if you can’t buy the “real” stuff.

If organic food companies are so concerned about these synthetic chemicals then it should simply not sell any product containing the chemical in question. Instead, the use is dependent on commercial availability. How dare they put consumers and their children at risk!

Some “flavors” in conventional foods can actually be made up of more than 100 chemicals that do not have to be labeled on the package.

They finally got something right, albeit by accident. One hundred chemicals in conventional foods? Oh, the humanity. A banana, whether is it organic or not, contains 42 chemicals that are responsible for its scent alone and a whole bunch more that are in it just for the hell of it. There’s about 100 right there. Shall we start labeling bananas, or maybe banning them? 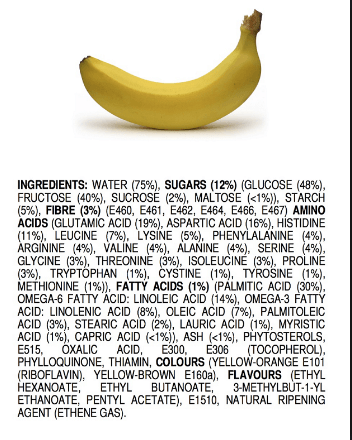 Some chemicals are not allowed to be in organic foods because they may be harmful to the environment.

OK, although it’s hard to see how a billionth of a gram of ammonium hydroxide (a form of ammonia) is going to heat up the planet, by all means, let’s keep it out of organic food. But this makes the following a little hard to explain:

“Synthetic ingredients allowed in organic food include ingredients that act as leavening agents, such as ammonium carbonate…”

Apparently, these guys aren’t such great chefs either, since the purpose of a leavening agent is to make dough rise. It does so via the following chemical reaction:

There is so much more and it’s just as ridiculous, so you really need to take chemical advice from EWG with a grain of salt. Or not. Salt is inorganic.

Josh Bloom joined the American Council on Science and Health in 2010 as Director of Chemical and Pharmaceutical Sciences, and has published 40 op-eds in numerous periodicals, including The Wall Street Journal, Forbes and The Chicago Tribune. Follow him on Twitter @JoshBloomACSH

A version of this article originally appeared on the GLP on July 10, 2019.