‘Immunological dark matter’: Is this why some people have a pre-existing immunity to COVID-19?

This article or excerpt is included in the GLP’s daily curated selection of ideologically diverse news, opinion and analysis of biotechnology innovation.
More than half a million people have died from COVID-19 globally. It is a major tragedy, but perhaps not on the scale some initially feared. And there are finally signs that the pandemic is shuddering in places, as if its engine is running out of fuel. This has encouraged many governments to relinquish lockdowns and allow everyday life to restart, albeit gingerly.

The spread of SARS-CoV-2 has been difficult to predict and understand. On the Diamond Princess cruise ship, for example, where the virus is likely to have spread relatively freely through the air-conditioning system linking cabins, only 20% of passengers and crew were infected. Data from military ships and cities such as Stockholm, New York and London also suggest that infections have been around 20% – much lower than earlier mathematical models suggested.

This has led to speculation about whether a population can achieve some sort of immunity to the virus with as little as 20% infected – a proportion well below the widely accepted herd immunity threshold (60-70%).

The Swedish public health authority announced in late April that the capital city, Stockholm, was “showing signs of herd immunity” – estimating that about half its population had been infected. The authority had to backtrack two weeks later, however, when the results of their own antibody study revealed just 7.3% had been infected. But the number of deaths and infections in Stockholm is falling rather than increasing – despite the fact that Sweden hasn’t enforced a lockdown. 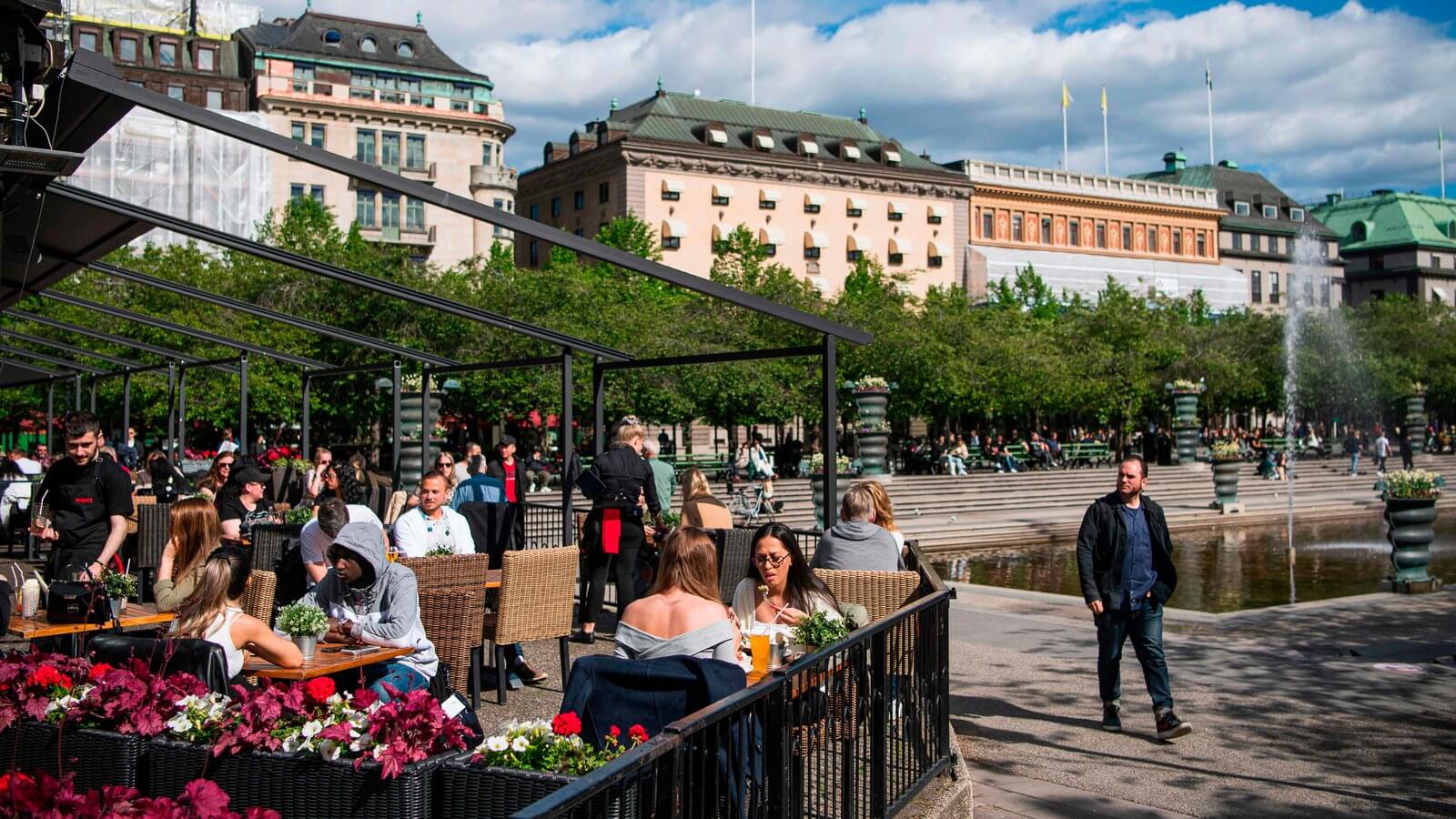 Hopes that the COVID-19 pandemic may end sooner than initially feared have been fuelled by speculation about “immunological dark matter”, a type of pre-existing immunity that can’t be detected with SARS-CoV-2 antibody tests.

Antibodies are produced by the body’s B-cells in response to a specific virus. Dark matter, however, involves a feature of the innate immune system termed “T-cell mediated immunity”. T-cells are produced by the thymus and when they encounter the molecules that combat viruses, known as antigens, they become programmed to fight the same or similar viruses in the future.

Studies show that people infected with SARS-CoV-2 indeed have T-cells that are programmed to fight this virus. Surprisingly, people never infected also harbour protective T-cells, probably because they have been exposed to other coronaviruses. This may lead to some level of protection against the virus – potentially explaining why some outbreaks seem to burn out well below the anticipated herd immunity threshold.

Young people and those with mild infections are more likely to have a T-cell response than old people – we know that the reservoir of programmable T-cells declines with age.

In many countries and regions that have had very few COVID-19 cases, hotspots are now cropping up. Take Germany, which quickly and efficiently battled the virus and has had one of the lowest death rates among the large northern European countries.

Here, the R number – reflecting the average transmission rate – has risen again, below 1 until June 18, but rocketing to 2.88 just days later, only to drop again a few days later. It may be tempting to argue that this could be because the hotspots never got close to the 20% infection that was seen in other regions.

But there are counter examples, albeit particularly in older and immunocompromised populations. In the Italian COVID-19 epicenter in Bergamo, a town where one in four residents are pensioners, 60% of the population had antibodies by early June.

The same is true in some prisons: at the Trousdale Turner Correctional Center in Hartsville, US, 54% of inmates had tested positive for COVID-19 by early May. And more than half of the residents in some long-term care facilities have also been infected.

So how do we explain this? Could people in places with higher rates of positive antibodies have a different genetic make-up?

Related article:  'It's the only strategy': Coronavirus pandemic cannot end without herd immunity

Early in the pandemic, there was much speculation about whether specific genetic receptors affected susceptibility to the SARS-CoV-2 virus. Geneticists thought that DNA variation in the ACE2 and TMPRSS2 genes might affect susceptibility to, and severity of, infection. But studies so far have shown no compelling evidence supporting this hypothesis.

Early reports from China also suggested that blood types may play a role, with blood type A raising risk. This was recently confirmed in studies of Spanish and Italian patients, which also discovered a new genetic risk marker termed “3p21.31”.

While genetics may be important, the environment also matters. It is well known that airborne transmission of droplets is enhanced in colder climates. Super-spreading events in several meat production facilities where the indoor climate is cold suggest this has enhanced contagion. People also tend to spend more time indoors and in close proximity during inclement weather.

Warm weather, however, brings people together, albeit outdoors. Indeed, June has been uncharacteristically hot and sunny in many northern European countries, causing parks and beaches to be overrun and social distancing rules flouted. This will likely drive contagion and cause new COVID-19 outbreaks in the weeks to come.

Yet another factor is how interpersonal interactions affect contagion. Some previous models have assumed that people interact in the same way regardless of age, well-being, social status and so forth. But this isn’t likely to be the case – young people, for example, are likely to have more acquaintances than the elderly. Accounting for this reduces the herd immunity threshold to around 40%.

The lockdowns enforced far and wide, combined with the responsible actions of many citizens, have undoubtedly mitigated the spread of SARS-CoV-2 and saved lives. Indeed, in cases such as Sweden – where lockdown was eschewed and social distancing rules were relatively relaxed – the virus has claimed an order of magnitude more lives than in its pro-lockdown neighbours, Norway and Finland.

But it is unlikely that lockdowns alone can explain the fact that infections have fallen in many regions after 20% of a population has been infected – something that, after all, happened in Stockholm and on cruise ships.

That said, the fact that more than 20% of people have been infected in other places means that the T-cell hypothesis is unlikely to be the sole explanation either. Indeed, if a 20% threshold does exist, it applies to only some communities, depending on interactions between many genetic, immunological, behavioural and environmental factors, as well as the prevalence of pre-existing diseases.

Understanding these complex interactions is going to be necessary if one is to meaningfully estimate when SARS-CoV-2 will burn itself out. Ascribing any apparent public health successes or failures to a single factor is appealing – but it is unlikely to provide sufficient insight into how COVID-19, or whatever comes next, can be defeated.

Paul W. Franks is a Professor in Genetic Epidemiology and Deputy Director at Lund University Diabetes Center in Sweden, where I also head the Genetic & Molecular Epidemiology Unit. His research focuses on precision diabetes medicine, with special emphasis on lifestyle interventions. Paul can be found on Twitter @paulwfranks

Joacim Rocklöv is a Professor of Epidemiology at Umeå University. He is engaged in research in the nexus of global health, environmental epidemiology and infectious disease ecology. His lab is focusing on understanding disease etiology, developing predictive models for the purpose of early warning and response systems, and estimating future health impacts in relation to climate and environmental change guiding climate action. Joacim can be found on Twitter @JoacimRocklov