How anti-Semitism shaped the genes of Jewish people

This article or excerpt is included in the GLP’s daily curated selection of ideologically diverse news, opinion and analysis of biotechnology innovation.
November, 2018 saw the 80th anniversary of Kristallnacht, “The Night of Broken Glass.” On November 9 and 10, 1938, Storm Troopers, Hitler Youth, and civilians rampaged through Nazi Germany, shattering the windows of more than a thousand synagogues, Jewish homes, and more than 7,000 businesses, arresting 30,000 Jews and transporting them to concentration camps. Some say the event marked the start of the Holocaust.

The anniversary comes just 13 days after the massacre of innocents at the Tree of Life synagogue in Pittsburgh, a chilling reminder that the flame of anti-Semitism burns on.

History books and the media chronicle the hatred and misplaced sense of superiority that fuels destruction of a people, like the remembrances of Kristallnacht. But evidence also lies in our genomes. That’s the case for the Ashkenazi Jews, whose ancestry traces back to Eastern Europe, not so very long ago.

A series of population bottlenecks

Nazi Germany’s failed “final solution” left marks in our DNA, from genes to genomes. The elevated frequency of mutations in the gene behind Canavan disease in the U.S., for example, traces back to at least two of the 250 or so souls who survived the massacre in the Vilna ghetto in Lithuania by running into the forest, in September 1943. I cover that story in my gene therapy book.

Genome-wide signals of past anti-Semitism come from farther back, especially from the near-extinction of the Jews during the Crusades. A population bottleneck back then led to much of the genetic similarity seen among modern Ashkenazim.

A bottleneck is a term from population genetics used to describe the near decimation of a group followed by restoration of numbers from just a few individuals, which amplifies persisting gene variants. A classic example is the current cheetah population; its near genetic uniformity today is a consequence of the ice age that ended about 11,700 years ago and, more recently, poaching.

Differences in DNA sequence among modern human genomes provide a backward-ticking “molecular clock,” possible because genes mutate at known and measurable rates. The different mutation rates of different genes are based on the nuances of the DNA base sequence, which affects the likelihood of an error occurring as the DNA replicates, which can in turn replace one DNA base with another. Accumulation of DNA sequence changes takes time – hence, the molecular clock of evolution. 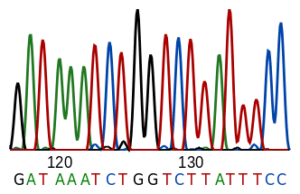 The Ashkenazim have managed to survive an undulation of population bottlenecks, a choreography of hatred that has serially strangled the diversity of our gene pool since our origins in the Levant (Egypt, Cyprus, Iraq, Palestine, Syria, Jordan, Lebanon, and Turkey) during Biblical times. The so-called “Jewish genetic diseases” are a legacy of repeated episodes of persecution. Any of these dozen or so conditions, from A (Alport syndrome) to Z (Zellweger syndrome), appears when an individual inherits two copies of the same recessive mutation from parents who shared a recent ancestor, like a great-grandparent.

After the Pittsburgh massacre, I searched for further info on the genomic scars of anti-Semitism, and quickly found a compelling report in PLOSGenetics. “The time and place of European admixture in Ashkenazi Jewish history,” from Shai Carmi of the Hebrew University and his colleagues, is from 2017. They applied new computational tools to expose how a severe population crash 30 or so generations ago, followed by an infusion of Eastern European DNA, brewed the Ashkenazi gene pool of today.

The devastating effect of the crusades

From 1095 through 1291, Jews, regarded as killers of Jesus Christ, faced choices: convert to Christianity, be killed, or commit suicide. Entire communities of Jews vanished. On a spring day in 1171 in Blois, France, for example, the entire, albeit small, Jewish part of the community was burned at the stake.

By the thirteenth century the small-scale murders of Jews had grown into mass killings. The fourteenth century saw wholesale evictions of Jews from Western Europe, and by the fifteenth century, very few were left in Germany and France. Many survivors dragged themselves in pitiful migrations to Eastern Europe.

Historical records are scant. Genetic evidence, also incomplete, compares modern human genomes or their parts against a backdrop of geographic origins and known migration patterns to glimpse what might have happened.

In a paper from 2014 in Nature Communications, Dr. Carmi and his team report the sequencing of the genomes of 128 modern Ashkenazi individuals. The investigators found clues to the past in extensive DNA markers and sequences that are identical and linked on the same copy of a chromosome – a sign of shared ancestry. Such “identical-by-descent” chromosome regions reflect a population bottleneck so severe, those 30 or so generations ago, that the most likely explanation is that at one time during the late-medieval period, only 350 Ashkenazim existed!

Instead of analyzing entire genomes, the experiments described in the 2017 report focused on parts that vary. The researchers compared 252,358 single-DNA-base sites (SNPs) in the genomes of 2,540 Ashkenazim, 543 Europeans, and 293 Middle Easterners.

And so the genomes of today’s Ashkenazim share six times as much of the sequence with Eastern Europeans as they do with Southern Europeans, making our color-coded maps on Ancestry.com overlapping or even superimposable.The computational analysis points to interbreeding (“admixture”) between populations from the Middle East and Southern Europe about 30 to 35 generations ago. But then a severe bottleneck came, at the time of the Crusades, followed by an infusion of genomes from Eastern Europe. The Ashkenazi gene pool formed from the Jews chased out of western European during the Middle Ages.

The recent murder of Jews while they worshipped, here in the United States, with the 80th anniversary of Kristallnacht just days away, brought home the horrors of Nazi Germany, the Jewish pogroms in Russia at the turn of the nineteenth century that many of our ancestors escaped, and the roots of anti-Semitism going back to the Middle Ages.

The news from Pittsburgh considered against the backdrop of history at first instilled a sense of helplessness. But it may have also brought about a new solidarity. Perhaps a way to prevent another crusade, pogrom, final solution, or synagogue shooting is for many Jews to act on the local level.

My community did that two nights after the Pittsburgh massacre. Schenectady Clergy Against Hate held an interfaith service at a local temple, with more than 600 in attendance. The evening brought together many groups. Paul Uppal, of the Guru Nanak Darbar Sikh Temple of Albany, set the tone of unity: “Make no mistake, this was an attack on us all. We must all deal with this horror.”

Rev. Horace Sanders Jr., pastor of the Mt. Olivet Missionary Baptist Church, urged the audience to go to the polls to fight the hate. “Vote for sanity. Vote for civility. Vote for humanity.” And we did.

Although no one uttered the President’s name, several of the clergy called him out on his persistent rhetoric of otherness, on his lexicon of “aliens,” “infestations,” and “invasions” and the obliviousness, or worse, mindful ignoring, of possible consequences of his words. He doesn’t have to be an anti-Semite himself to legitimatize anti-Semitism through his verbal threats on other groups.

At the conclusion of the vigil, Rabbi Matt Cutler announced a series of community forums to counter the current political divisiveness through discussing what people share. At the first forum, last night, he began, “We are here to address the hate that arose in our country over the last few weeks to find a united voice and a sense of solidarity.”

Ricki Lewis is a science writer with a PhD in genetics. Ricki provides genetic counseling for parents-to-be at CareNet Medical Group in Schenectady, NY and teaches “Genethics” an online course for master’s degree students at the Alden March Bioethics Institute of Albany Medical Center. Her Twitter handle is @rickilewis

A version of this article was originally published on the PLOS Blogs website as “The Genomic Scars of Anti-Semitism” and has been republished here with permission. PLOS can be found on Twitter @PLOS

This article originally appeared on GLP on December 19, 2018.