This article or excerpt is included in the GLP’s daily curated selection of ideologically diverse news, opinion and analysis of biotechnology innovation.
While biotech giant Bayer attempts to settle thousands of lawsuits alleging its weed killer Roundup causes cancer, several studies published over the last six years have suggested that glyphosate, the active ingredient in the the much-maligned herbicide, may actually prohibit cancer cell growth.

A paper published on June 24, 2019 in the Journal of Environmental Science and Health, Part B is the fourth such study since 2013 to suggest that Roundup may have cancer-fighting properties. The authors reported that the co-formulants—substances that enhance the performance of the active ingredient glyphosate—inhibited the growth of cancerous human liver, lung and nerve cells, while glyphosate was relatively harmless: 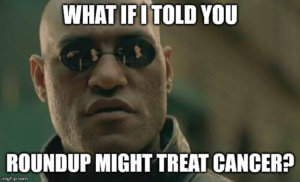 While this study adds to the body of evidence amassed by 15 regulatory agencies and independent experts worldwide showing that glyphosate probably doesn’t cause cancer, there’s a more important point worth stressing. In May 2019, the GLP reported on the three earlier papers suggesting that glyphosate could potentially be developed into a cancer therapy, because we wanted to illustrate why cherry picking studies to justify preconceived opinions is so problematic.