The pandemic requires a temporary suspension of the world’s usual intellectual property system, [a group of developing countries led by India and South Africa] say they will argue at a WTO council meeting [November 20]. If poorer countries aren’t given special access to the vaccines, which are expected to hit the market by the start of next year, the group of developing nations say they will argue, they will continue to be devastated by the coronavirus even as it is stopped in the West.

The proposed waiver pits the developing nations against the U.S., the European Union, Japan and other wealthier countries, as well as Western pharmaceutical companies, which say respecting intellectual property rights is key to promoting the rapid development of the vaccines.

Developed nations have already struck deals with Western pharmaceutical companies to buy up enough vaccines to tie up most of the world’s production capacity until the end of 2021.

If the developed nations don’t relent, South Africa is prepared to try to force the issue through a rare contested vote at the trade organization, said Mustaqeem De Gama, counselor at the South African mission to the WTO…

“I don’t understand how governments of the world are able to outsource their responsibility for public health to a few companies that are able to hold them all ransom,” Mr. De Gama said. 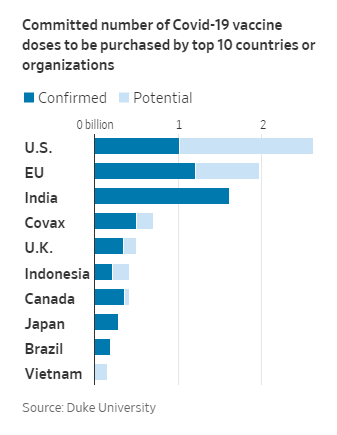