Your personal genetic makeup can determine whether you respond to a treatment, get worse, or even die

Henk-Jan Guchelaar knows all too well the serious problems that the side–effects of medication can cause. As a professor of clinical pharmacy at the University of Leiden in the Netherlands, he has spent the last two decades trying to get the link between medicine and our genes recognised more widely.

The stories he hears from patients and their families bring home the impact that these gene-drug interactions can have. It can even have fatal consequences, as one man described to him.

‘He told me about his wife, who had breast cancer and underwent surgery. The prognosis was very good. The tumour was removed by the surgeon but, to prevent micro-metastases, his wife had to receive six courses of (chemotherapy drug) fluorouracil. During the second infusion of the drug, the patient collapsed, went to the intensive care unit and died,’ he said.

A blood sample taken later showed she had a variant of the gene DPYD that was known to be linked to side effects with fluorouracil.

‘It’s a very sad story. (She) had a very good prognosis; the tumour was gone. If the patient had been tested beforehand, it was very likely that she would not have had this severe drug reaction,’ said Prof. Guchelaar.

In 2005, he joined other Dutch pharmacy experts to create a list of the gene variants known to alter the way we respond to certain drugs. Since then, they have made recommendations for over 100 gene-drug interactions identified.

These are not rare genetic disorders. Genetic variants are normal differences in the DNA code between different people – they’re what make some people have blue eyes and others brown, for example. But the impact of genetic variation is not yet widely taken into account in medicine.

‘(The list of 100 gene-drug interactions) is much more than most physicians think,’ said Prof. Guchelaar. ‘Most prescribers think that because it is genetic, this is a very rare event. They still think it is academic. They think it’s something for the future.’

In fact, 95% of people have a gene variant that we know affects their response to at least one drug. This is often due to changes in the way that it is broken down by the body. If it is metabolised slowly, even a standard dose of the drug can build up to high levels in the body and cause serious side-effects.

At the time, such ‘pharmacogenetic’ variants were used to understand why certain patients responded badly to treatment. It was considered as an afterthought, used only once something had already gone wrong.

Prof. Guchelaar and his colleagues wanted to intervene earlier in the treatment pathway and reduce severe side-effects happening in the first place. They integrated their findings into the electronic systems used for prescribing drugs in the Netherlands. When the pharmacist pulled up the patient’s records, the system would give an alert with a recommendation for changing the dosage.

‘That was implemented nationwide, however, there was one problem. There are not so many patients who have been genotyped (tested for the gene variants). The system was in place, but in fact, it did not generate alerts because the genetic information was not available,’ said Prof. Guchelaar.

From previous research, they knew that patients with a variant in the DPYD gene had a 75% chance of a severe adverse reaction when treated with fluorouracil, just like the woman whose husband contacted Prof. Guchelaar. The evidence showed that halving the drug dose for these people could reduce that risk to 25%. 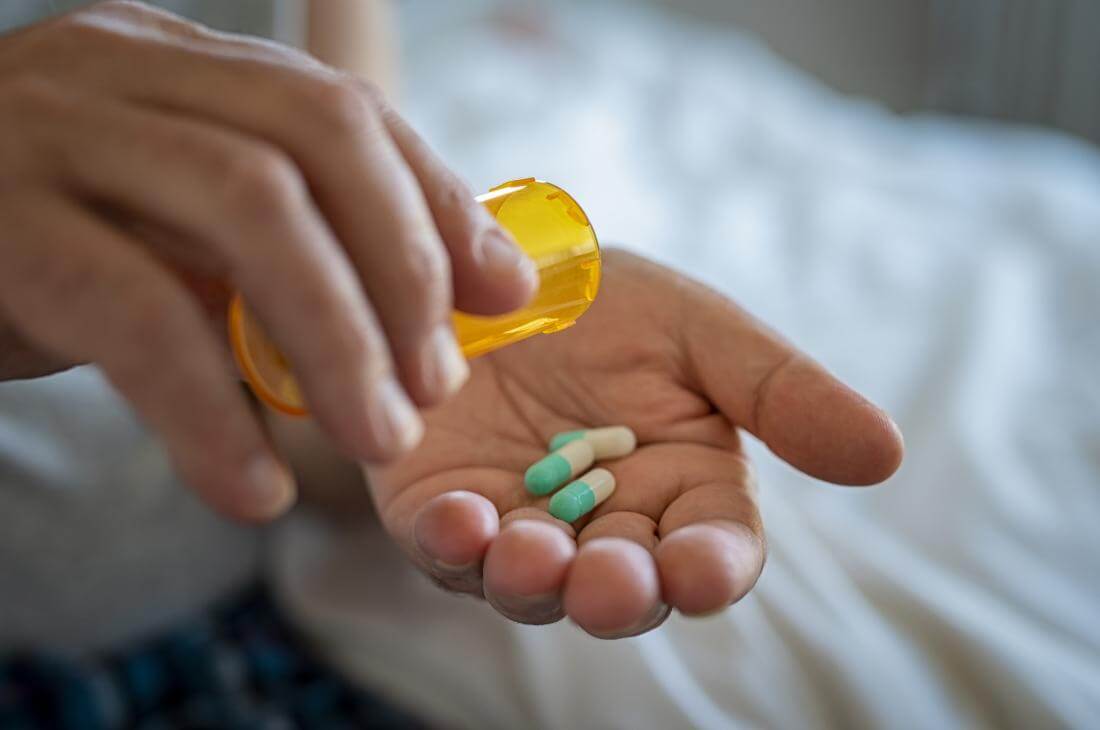 In 2013, the team started testing for this gene at Leiden University Medical Centre as part of routine practice whenever fluorouracil or capecitabine, a similar drug, are prescribed. Over the next 18 months, they adjusted the dose for 300 patients identified with the DPYD variant and none suffered severe side effects. This was then expanded to 20 hospitals in the Netherlands.

To build on this success, Prof. Guchelaar launched the Ubiquitous Pharmacogenomics project to work towards effective treatment optimisation of a wide range of drugs for every European citizen.

Their vision is that people would be tested for a panel of genetic variants, which would then be linked to health records.

The project includes a clinical trial to test the benefits of pharmacogenetic screening across a wide range of treatments. The trial, called PREPARE, recruited almost 7,000 people across seven European countries. 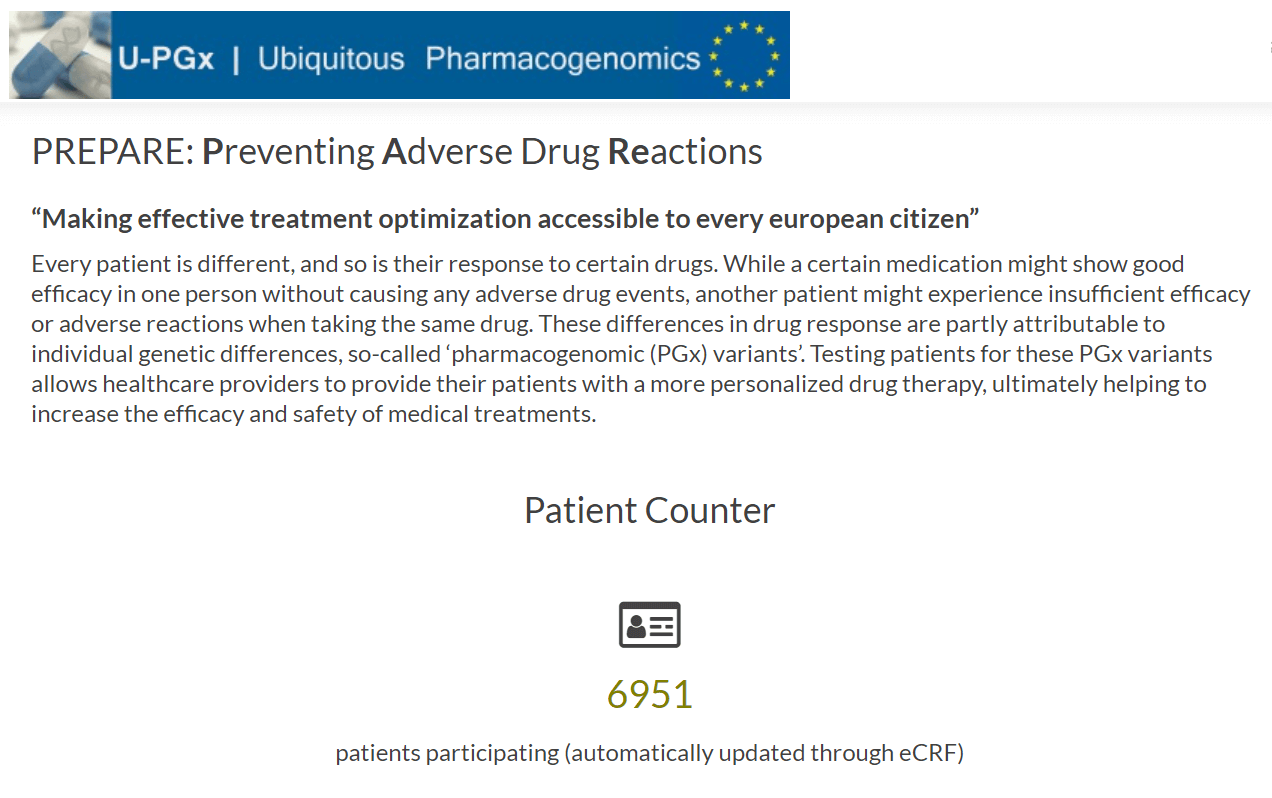 Each participant took a genetic test for 50 pharmacogenetic variants when they were prescribed one of the drugs being studied. Some of the treatments on the list are commonly prescribed, including statins and blood-pressure-lowering drugs.

The dosage recommendations for each drug are based on studies of the different rates of metabolism, or pharmacokinetics, in people with each variant. This allows the doctors to adjust the dose to ensure that the right amount of the drug is present in the patient’s system.

For instance, variants for CYP2D6, a liver enzyme that is involved in the metabolism of a quarter of all marketed drugs, can be classed in four categories. Some patients will need a substantially reduced dose, while fast metabolisers will need a higher dose than normal.

Despite some patients receiving lower doses, they should not be concerned about being undertreated, says Dr Jesse Swen, also from the University of Leiden, who is leading the trial:

‘We know from pharmacokinetic data that if you lower the dose (in someone with the poor metaboliser variant of CYP2D6) by 50%, then you still have the same drug levels (in the body) compared to a normal metaboliser who receives 100% of the dose. So, I’m not at all worried that we would be undertreating patients.’

In some cases, prescribers will be recommended to switch to a different medication that is metabolised differently.

‘Some of the recommendations also include a call to follow a patient more closely or to do additional testing because sometimes it’s very difficult to predict the exact dose, but you definitely need to be more aware of failure of therapy,’ said Dr Swen.

The trial has followed all the patients involved for at least three months to look for adverse reactions. The data is now being analysed, and the researchers hope to announce their findings in spring next year.

If the results are positive, Prof. Guchelaar hopes it will pave the way for pre-emptively testing the population for these 50 variants, before they are prescribed any of the drugs on the list.

‘If the PREPARE study shows that there is a reduction of the incidence of severe adverse drug reactions, I cannot think of any reason why you should not start testing,’ he said.

‘There are commercial laboratories offering over–the–counter testing, so patients also realise that this is beneficial to them. So there is nothing I can think of that would be a barrier for implementation. If it shows it is cost–effective, then it would be strange not to let it be part of clinical practice.’

Ian Le Guillou is a freelance science writer. After completing his PhD in Biochemistry, he worked in research communications for six years in the charity sector. Find Ian on Twitter @ianleguillou

A version of this article was originally posted at Horizon Magazine and has been reposted here with permission. Horizon can be found on Twitter @HorizonMagEU