Glyphosate on trial: In an ‘unequal contest’ between science and emotion, can evidence overcome pesticide-cancer fears?

Recently, I was asked to speak about the weedkiller glyphosate on Radio Colombia. As is often the case with media appearances, I didn’t know what to expect and was given very little information about the parameters of the interview. Would the interviewer be objective? What questions would he ask? Would the final product accurately convey the message I tried to get across? Would the segment accurately represent the science I contributed? There’s generally no way to know in advance, and it’s well known among researchers that the media has a mixed record when handling contentious scientific topics.

Of course, glyphosate is about as contentious as it gets. The weedkiller, though declared relatively harmless by scientists around the world, has been the subject of thousands of lawsuits, which allege that Monsanto (now owned by Bayer) failed to warn its customers that its glyphosate-based herbicide Roundup causes non-Hodgkin’s Lymphoma (NHL), a rare cancer. The company is poised to pay out a record-breaking $11 billion settlement to end the litigation. 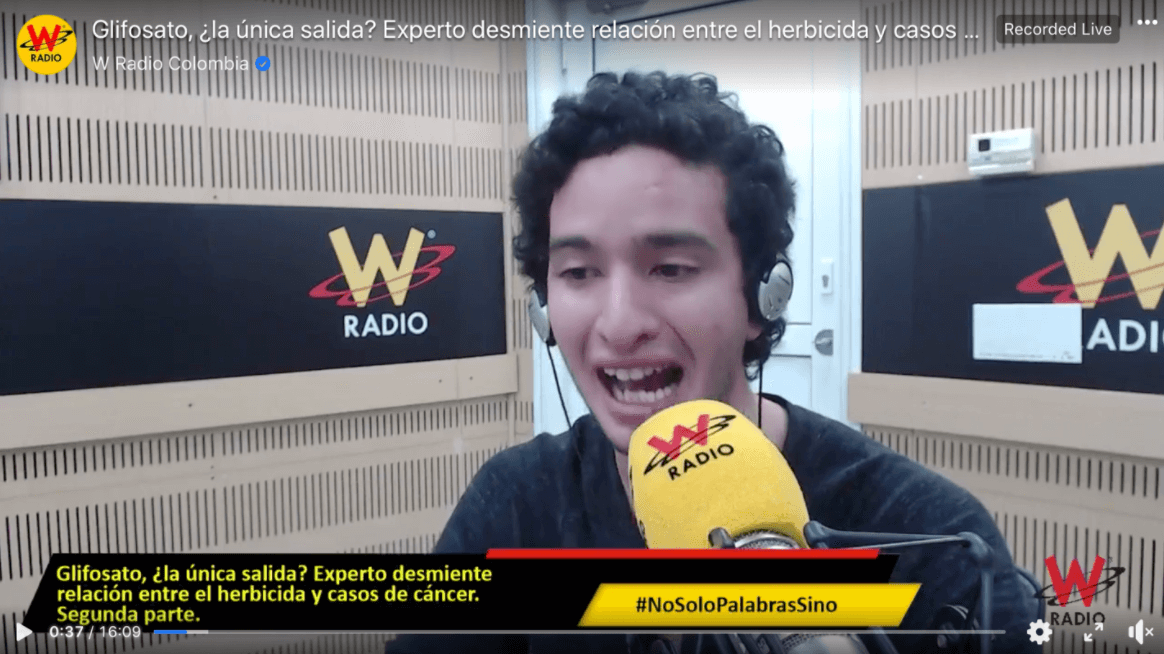 All I knew was that my interview would be preceded by an interview with a non-Hodgkin’s lymphoma survivor who had used Roundup and was a plaintiff in one of these lawsuits against Bayer.

I was undecided as to whether I would go through with the interview. However, the producer at least responded to all my questions and agreed to show some slides I wanted to display. So, in the end, I agreed to appear on the show, and I’m ultimately glad I did.

Participating gave me an opportunity to present a view of the issue the audience might not have been exposed to otherwise. Moreover, the interview helpfully illustrated how difficult it is for us to set aside our biases and preconceptions and take in what the best science on the topic has to say. Contrasting the widely circulating, but misleading, memes with the core scientific facts is perhaps the best thing we can do to explain issues like this one, which are key to protecting public health and the environment.

The first segment of the show was devoted to an interview with a well-spoken woman named Christine Sheppard, who had bought a coffee farm in Hawai’i in 1995. She had sprayed Roundup (glyphosate) using a backpack tank “for several years” before being diagnosed with NHL in 2003. She underwent multiple rounds of chemotherapy and radiation, a bone marrow transplant, and, finally, monoclonal antibody treatment. The last treatment put her into remission. One could have nothing but respect and sympathy for the ordeal she had gone through and the dignity with which she described her experience. The same courtesy should be extended to every individual in these lawsuits, each of whom has a similarly traumatic story about grappling with a cancer diagnosis and fighting for survival. 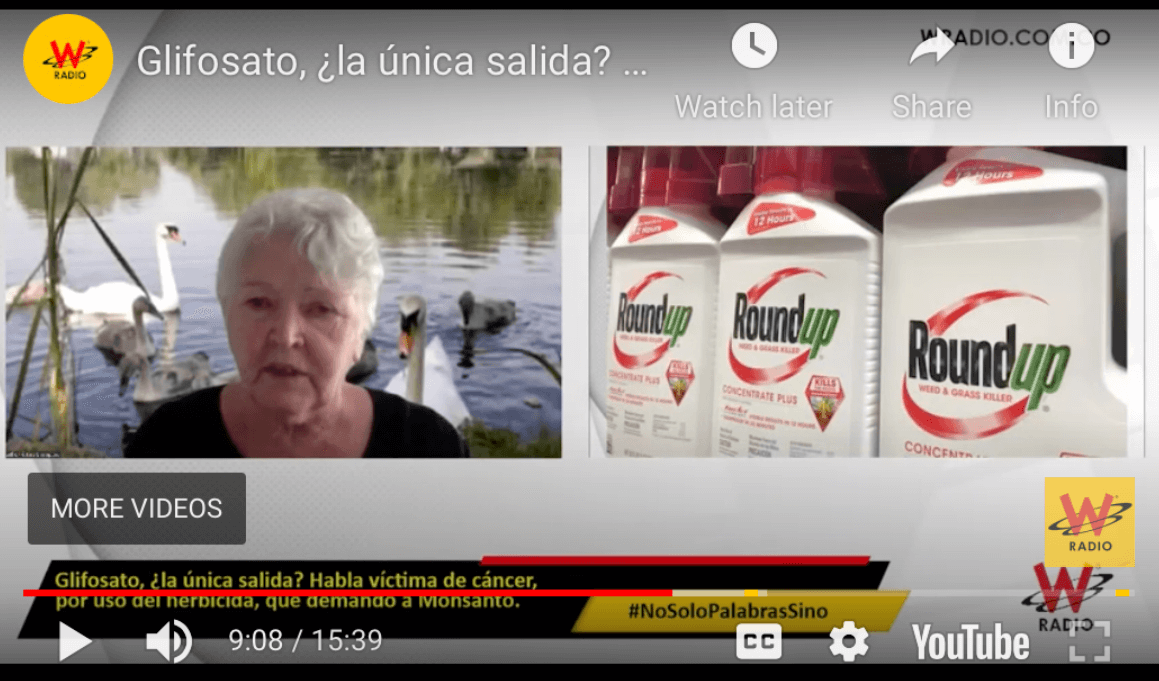 The interviewer, who was very professional, asked Sheppard how she decided that Roundup had caused her cancer. She answered that when she heard the news in 2015 that the “World Health Organization” had linked glyphosate to cancer, she screamed out loud to her husband, “Look, this is what did it! Nothing else could have done it!”

When asked about scientists who disagree with the claim that glyphosate is carcinogenic, she said, “I think they’re ignoring the science.” Her delivery was extremely effective. Since the half-hour segment allotted to her was taken up with news, advertisements, setup of the story in Spanish, and translation of her words from English into Spanish, all told, she must have spoken for less than ten minutes.

The second half hour allotted to me was similarly pared down. Only I had a more complicated story to tell. I had sent six slides to the producer to be displayed during my talk, but, in the ten minutes devoted to my interview, I only got to make a fraction of my points. 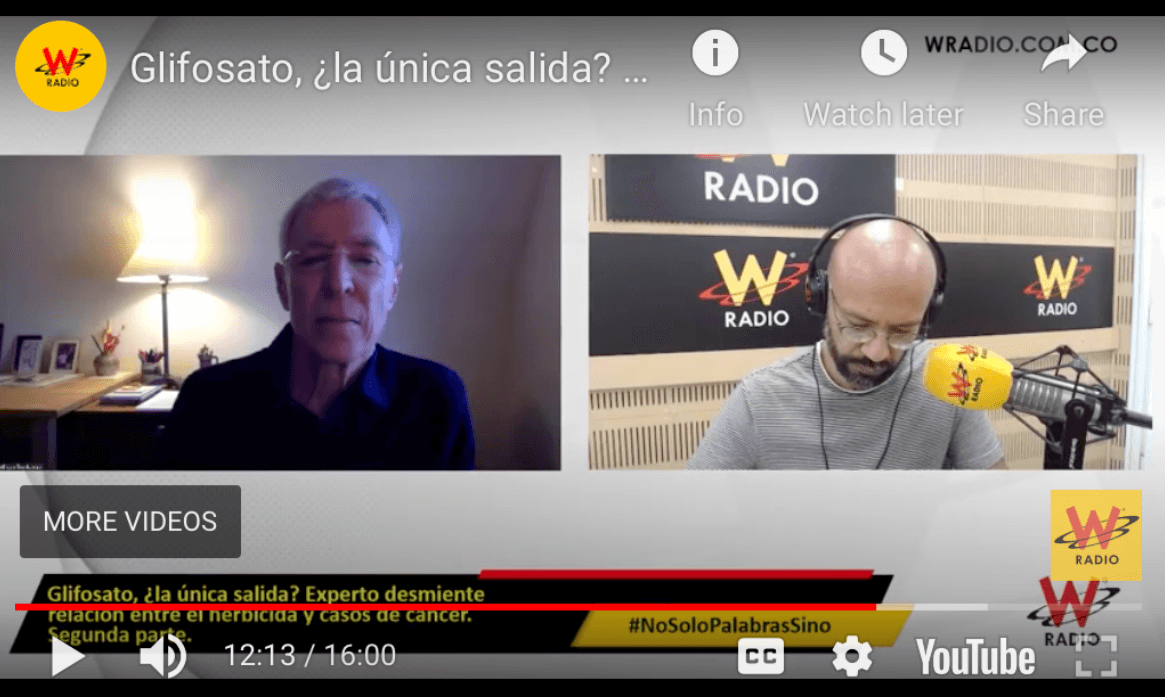 The interviewer wanted to dive right in to what I thought about glyphosate. But I said that “a lot of people have opinions,” and I needed to identify myself — as an epidemiologist, who for forty years has done research on a wide range of exposures, including smoking, alcohol, diet, hormones, obesity, electromagnetic fields, etc. In addition, I added that I have made a sideline of trying to explain what we know about the relative importance of these risks to the general public, and have written two books and roughly a hundred articles on health risks for a general audience.

I then made it clear that I have never taken money from Monsanto, Bayer, or any other chemical company. Finally, I expressed my sympathy for the ordeal that Ms. Sheppard had gone through.

Only then did I turn to my first slide and my points, which were these: 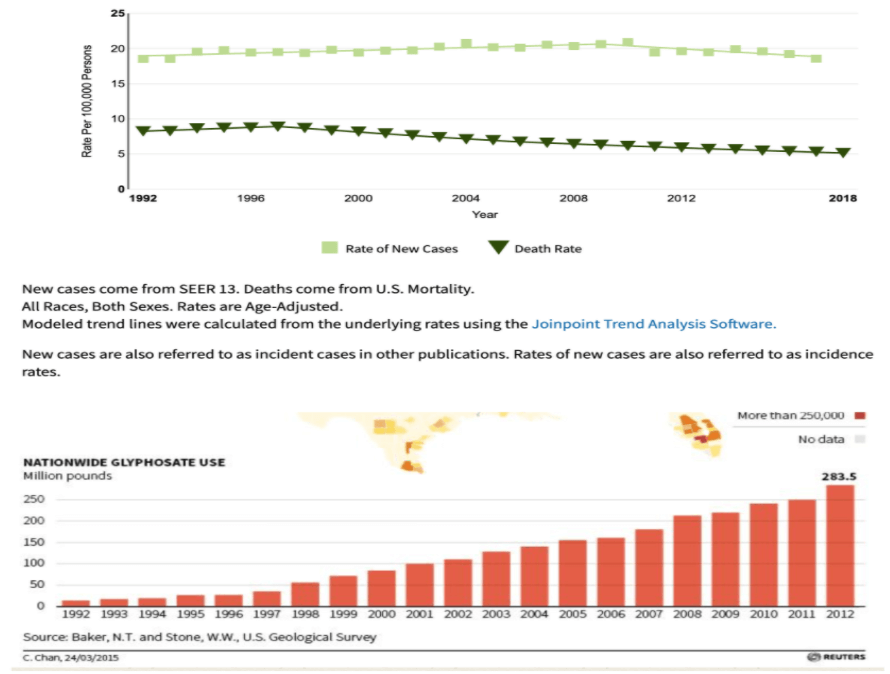 All of this had to be translated into Spanish, and, from what I could tell, the interviewer did an excellent job.

The interviewer then asked how I accounted for the testimony of plaintiffs in the many lawsuits against Bayer. I said that the lawsuits have nothing to do with science. They present a drama in which an unfortunate person suffering from a terrible cancer, about which little is known, is portrayed as the victim of a heartless multinational corporation.

The interviewer then asked me what I thought of Colombian government’s use of glyphosate to destroy coca plants as part of its efforts to control the drug trade. I said that, since the best evidence indicates that glyphosate is safe, there is no reason not to use it.

By then, my time was up.

A lesson we need to keep learning

Although I was dissatisfied that I had not been able to make all of my points, the producer emailed me soon after the program, thanking me enthusiastically for the interview, which he said was “actually great!” That kind of feedback is always gratifying, but this foray into radio confirmed for me the two opposing universes of opinion regarding a useful agricultural tool.

On the one hand, there is the world of toxic tort litigaiton, which seizes on any support, no matter how tenuous, to bring record-setting lawsuits against large corporations, exploiting the plaintiffs as highly effective props. Indeed, IARC’s decision to classify glyphosate as “probably carcinogenic” is, at best, tenuous. Independent experts and an investigative journalist have highlighted severe scientific deficiencies in the agency’s analysis, notably its willingness to exclude data challenging the glyphosate-cancer link. Ethical questions have also been raised about the seemingly cozy relationship between certain IARC scientists and the law firms who brought the litigation against Bayer.

But humans are so constructed that we have a desperate need to find an explanation for why we contract dire diseases. And juries, made up of non-scientists, react with predictable sympathy to heartbreaking stories like Sheppard’s. It is only natural for jurors to identify with plaintiffs who are fighting for their lives.

Christine Sheppard had suffered from her illness for 12 years before IARC issued its “probable carcinogen” verdict. When she heard the news, a light bulb went off in her head, and she knew that this was the explanation. To people suffering from a rare disease about which little is known, IARC’s “probable carcinogen” classification was all that was needed to supply the missing cause.

But, on the other hand, what was left out of her story is the denominator — the untold numbers of people who have used glyphosate and have not developed NHL. In addition, it left out what is known about the toxicology and carcinogenicity of glyphosate from decades of study.

This is the much less emotionally satisfying realm of science, which entails designing studies, collecting and analyzing data — an arduous process all the way through. The results are then presented in dry and boring statistical papers, which then need to be evaluated critically to determine how believable they are.

It’s an unequal contest, and we know which side is more viscerally satisfying.

We are all susceptible to falling for sensational results from what turn out be preliminary or biased studies. This includes scientists, who, it helps to remember, are human. The behavioral psychologist Daniel Kahneman has pointed out that even statisticians can be misled by striking results that appear to be important but are based on small sample sizes or otherwise faulty studies.

This means that we are all in the same boat and have to continually be reminded to approach shiny and sensational results with due skepticism. Examples like glyphosate, which show such as stark divide between the dominant narrative and the scientific facts accumulated over four decades, provide much-needed teaching tools.