Taboo: Why has Africa emerged as the global coronavirus ‘Cold Spot’ — and why are we afraid to talk about it?

This article or excerpt is included in the GLP’s daily curated selection of ideologically diverse news, opinion and analysis of biotechnology innovation.
The first COVID-19 case in Africa was confirmed on February 14th, 2020, in Egypt. The first in sub-Saharan Africa appeared in Nigeria soon after. Health officials were united in a near-panic about how the novel coronavirus would roll through the world’s second most populous continent. By mid-month, the World Health Organization (WHO) listed four sub-Saharan countries on a “Top 13” global danger list because of direct air links to China. Writing for the Lancet, two scientists with the Africa Center for Disease Control outlined a catastrophe in the making:

With neither treatment nor vaccines, and without pre-existing immunity, the effect [of COVID-19] might be devastating because of the multiple health challenges the continent already faces: rapid population growth and increased movement of people; existing endemic diseases… re-emerging and emerging infectious pathogens… and others; and increasing incidence of non-communicable diseases.

Many medical professionals predicted that Africa could spin into a death spiral. “My advice to Africa is to prepare for the worst, and we must do everything we can to cut the root problem,” Tedros Adhanom Ghebreyesus, the first African director-general of the WHO, warned in March 2020. “I think Africa, my continent, must wake up.” By spring, the WHO was projecting 44 million or more cases in Africa and the World Bank issued a map of the continent colored in blood red, anticipating that the worst was imminent: 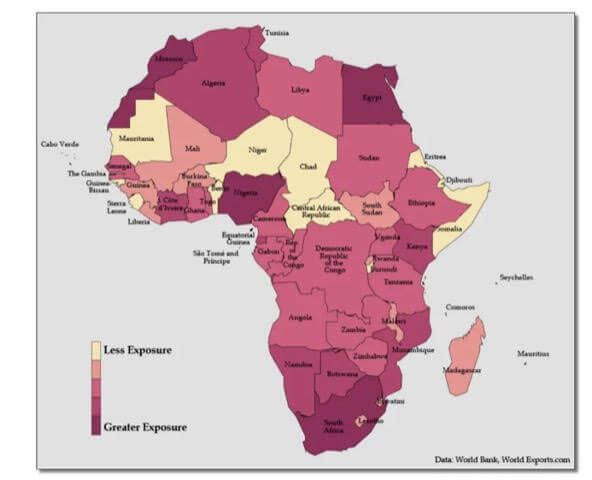 These dire warnings seemed to make sense. After all, two-thirds of the global extreme poor population (63 percent) live in sub-Saharan Africa. According to the World Bank, more than 40 percent of the region lives in extreme poverty and unhygienic environments, conflict, fragmented medical and education systems, and dysfunctional leadership—all factors that was expected to light a match to the tinder of the SARS-CoV-2 outbreak. Scientists say that most African countries lack the capacity and expertise to manage endemic deadly diseases like malaria. Africa seemed ripe for catastrophe.

But disaster never came. Africa has not been affected on anything like the scale of most countries in Asia, Europe, and North and South America. (The major exceptions being China, Taiwan, Australia, and New Zealand, which zealously enforced lockdowns.) In fact, the vast African sub-continent south of the Sahara desert, more than 1.1 billion people, has emerged as the world’s COVID-19 “cold spot,” as illustrated by an ECDC map reproduced by BBC and by graphics like these: 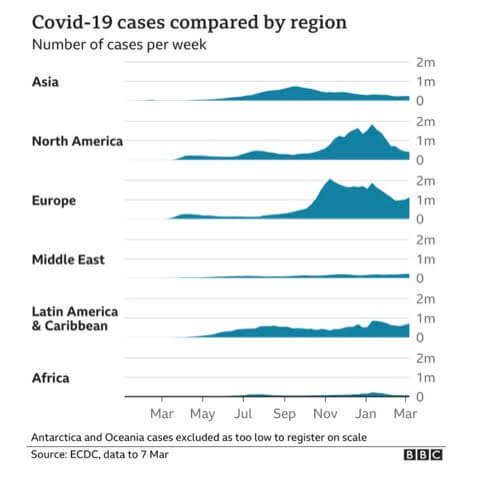 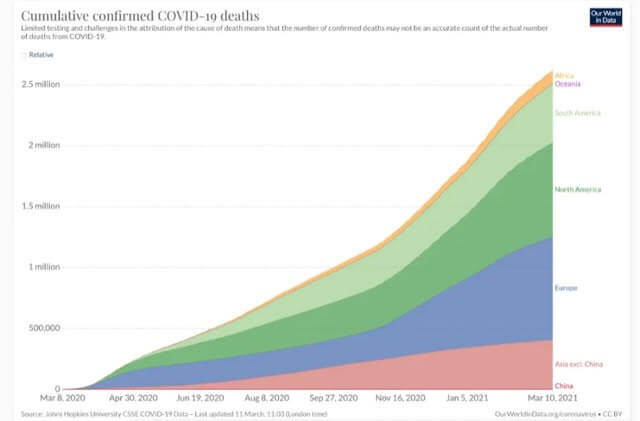 ADVERTISEMENT
[Note: As dramatic as the statistics and graphs are, they significantly overstate African cases and fatalities, as the African continent includes the mostly white countries of North Africa, which have been hit far harder by COVID than sub-Saharan Africa.]

The latest statistics show about four million cases and 107,000 coronavirus-related deaths, concentrated mostly in the Arab majority countries north of the Sahara. Except for South Africa—the most multiracial of the black-majority countries—and Nigeria, sub-Saharan Africa has largely been spared. And these startling low case and death statistics come even as Africa has the lowest vaccination rate in the world—less than one dose administered per 100 people, and with many countries having given none to the general population.

Europe has less than two-thirds of the population of Africa, but by late-March it had 41 million cases and more than 900,000 deaths—900 percent more. The US, with less than a third of the population of Africa, has approximately 30.4 million cases and 551,00 deaths as of March 31, thousands of percent more on a per capita basis than Africa. In other words, the US, Europe, and parts of South America are experiencing far more than 1,000 deaths per million while most of sub-Saharan Africa has between 0.5 and 25 deaths per million, according to stats updated regularly by Wikipedia. 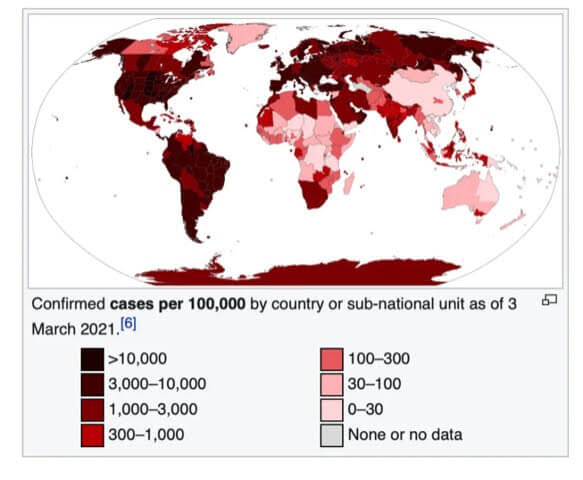 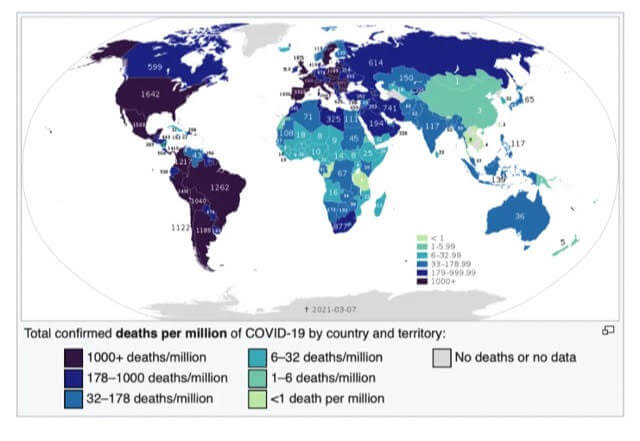 Journalists and even some scientists have been twisting themselves into speculative pretzels trying to explain this phenomenon. Theories range from sub-Saharan Africa’s “quick response” (no); favorable climate (which has not protected tropical sections of Brazil, Peru, and other warmer climes in South America); and good community health systems (directly contradicted by WHO and Africa CDC). In each of the articles acknowledging these “puzzling” statistics, journalists were sure to suggest that Armageddon might be right around the corner.

“Experts fear a more devastating second surge,” warned National Geographic in late December, although there was no first surge and just two weeks before Africa’s tiny December uptick (driven almost entirely by the mutant variant in South Africa) turned back downward, according to Reuters:

Why Africa has been less impacted by COVID-19

So what’s going on here? And why are the media and most scientists so unwilling to engage one of the most plausible science-based factors: that black Africans appear to be protected, at least in part, by their ancestry? Combined with the fact that sub-Saharan Africa is the youngest region in the world—youth brings fewer co-morbidities and age is the most significant factor in contracting and dying from COVID-19—ancestry is likely a significant contributing factor to sub-Saharan Africa’s comparatively modest case and death count.

Related article:  Part 1: Defying all predictions, Africa is the global COVID-19 ‘cold spot’. How come health officials and the media are not honestly exploring why?

With the notable exception of a research project in Hawai’i, scientists tend to shy away from exploring the population genetics angle, almost certainly fearful of stirring the embers of ‘race science’. “It is really mind boggling why Africa is doing so well, while in US and UK, the people of African ancestry are doing so poorly,” Maarit Tiirikainen, a cancer and bioinformatics researcher at the University of Hawai’i Cancer Center, told us in an email.

Dr. Tiirikainen is a lead researcher in a joint project at the University of Hawai’i and LifeDNA in what some believe is a controversial undertaking considering the taboos on race research. They are attempting to identify “those that are most vulnerable to the current and future SARS attacks and COVID based on their genetics.”

Blacks (along with other ethnic minorities) in the US and Great Britain who have contracted COVID-19 have generally fared worse than Whites. “For the latter, it seems the Western socioeconomics may play a major role,” Dr. Tiirikainen wrote. Each individual’s risk of dying from a particular disease tends to reflect access to adequate healthcare and underlying health conditions (co-morbidities). Those factors have proved a lethal mix in poorer communities in the US, UK, and other countries, with lower income groups—often ethnic and racial minorities—dying at disproportionately high rates.

ADVERTISEMENT
ADVERTISEMENT
[Note: The terms “black” and “white” are used here as shorthand for more cumbersome expressions like “those of African descent” or “people of European ancestry”—they are not science-based population categories.]

But Africa has proven unique. Dr. Tiirikainen, like many candid researchers in this field, is skeptical that social and environmental factors alone can account for the extraordinarily low COVID-19 African infection and death rates. It is not because Africa took extraordinary steps to insulate itself as the pandemic spread. Healthcare remains fragmented at best and COVID information outreach has been limited by scant resources.”There may also be genetic differences in immune and other important genes,” she said.

At the end of March, 2020, when much was still to be learned about the science of COVID-19, the co-authors of this article—the Genetic Literacy Project’s Jon Entine and contributing science journalist Patrick Whittle—discussed some of the potential reasons in the article “What’s ‘race’ got to do with it?” Following discussions with many experts, we decided not to reflexively exclude genetic explanations, which are a taboo subject. Rather, we examined the panoply of likely causes, rejecting the a priori Western prejudice that often excludes evidence that might be linked to population-level genetics and group differences for fear of “racializing” the analysis. We are obviously aware that skin color is not a recognized science-based population concept. Given the racist history of biological beliefs about human differences, addressing the fact of ancestrally-based genetic differences must be pursued carefully.

Why even discuss possible genetic factors? Because biases among researchers and public policy officials could undermine the development and deployment of treatments and antiviral vaccines for all of us, but particularly for more vulnerable populations in Africa and in the African diaspora. Blacks and other racial minorities in the US, Latin America, and the UK are more likely to suffer chronic health problems. For example, in the US, blacks are more than 50 percent likelier to report having poor health as compared to whites, and more than two-thirds of black adult women are overweight. Developing therapies for at-risk populations is critical. Those with genetic resistance to infection or who may be genetically protected in some degree from developing symptoms could help scientists develop treatments for all. Lives are at stake.

So let’s dip into these murky waters. Could our ancestry, which defines our genetic make-up, play a role in susceptibility to COVID or other viruses?

The rest of this article can be read at Quillette. Quillette can be found on Twitter @Quillette

A version of this article originally appeared on the GLP as a two part series. Read those articles here:

Jon Entine is the founding editor of the Genetic Literacy Project, and winner of 19 major journalism awards. He has written extensively in the popular and academic press on population genetics, including two best-sellers, Taboo: Why Black Athletes Dominate Sports and Why We’re Afraid to Talk About It, and Abraham’s Children: Race, Genetics, and the DNA of The Chosen People. You can follow him on Twitter @JonEntine

Patrick Whittle has a PhD in philosophy and is a New Zealand-based freelance writer with a particular interest in the social and political implications of biological science. You can find him at his website patrickmichaelwhittle.com or follow him on Twitter @WhittlePM