This article or excerpt is included in the GLP’s daily curated selection of ideologically diverse news, opinion and analysis of biotechnology innovation.
The United States and Europe are home to some of the most influential anti-biotechnology advocacy groups in the world. They are well funded, committed to spreading misinformation about genetic engineering, and have worked tirelessly to stir up public opposition to genetically modified (GM) crops and pesticides. Because they aren’t the cultural juggernauts they were just a few years ago, some commentators have speculated that this particular brand of science denialism has retreated to the fringes of society.

Sadly, anti-GMO activism has not run out of steam just yet. Over the last 25 years, a vast network of radical environmental groups has established itself globally, most notably in sub-Saharan Africa and Latin America, where it continues to wield tremendous, though less visible, political influence.

These activist groups have been very active in my native Mexico and the surrounding region, though the science community is now working to expose their cynical anti-technology efforts. In this two-part series, we will examine dozens of non-governmental organizations (NGOs) working to undermine scientific innovation in Latin America, beginning with arguably the five worst offenders.

Over the last 25 years, Biodiversidad en America Latina y el Caribe (Biodiversity from Latin America and the Caribbean), better know in the region as Biodiversidad LA, has been disseminating myths and misinformation about the use of transgenic crops and pesticides, biopiracy, and livestock farming. The group endorses agroecology, an ill-defined term often used by activists to promote ancient farming techniques over the latest science-based tools that growers want to use.

Biodiversidad LA has served as a headquarters for anti-GMO activists in the region. The group monitors regional policy developments and mobilizes against the use of GMOs. It produces the propaganda its affiliates and like-minded NGOs in each country disseminate, creating the false perception of broad opposition to genetic engineering in Latin America. 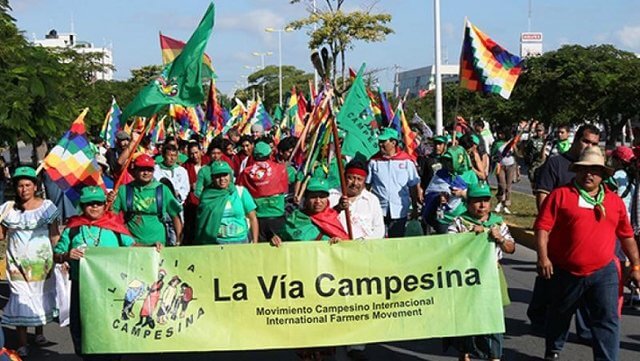 Founded 28 years ago, Via Campesina is an international movement that coordinates organizations of farmers, indigenous communities, and agricultural workers. The group boasts a membership of 182 local and national NGOs from 81 countries in Africa, Asia, Europe, and the Americas. Although not exclusively focused on Latin America, its influence extends to a significant number of countries in the region, through its affiliated organizations.

The group has perfected a campaign strategy now extremely popular in the anti-GMO movement: target vulnerable groups and offer “solutions” that coincide with Via Campesina’s anti-biotech agenda. In practice in Latin America, this means developing relationships with vulnerable actors in the agri-food chain—small farmers, landless people, rural women, migrants, and indigenous communities—and promoting the benefits of a specific brand of agroecology as the only possible way to reach “food sovereignty.” This includes blaming modern food production tools and techniques for the problems they actually help solve, like climate change.

By doing so, Via Campesina is denying the vulnerable groups it cares so much about access to technologies that have been shown to combat poverty in the developing world.

La Union de Cientificos Comprometidos con la Sociedad (Union of Scientists Concerned for Society), better known as UCCS, is a Mexico-based anti-GMO group. Founded in 2004 by a group of Mexican scientists well known as GMO skeptics, the organization has recently moved several of its key figures into federal regulatory positions in the Ministry of Science, Environment, and Agriculture. These activists-turned- regulators have worked diligently to ban GM corn, soybean and cotton, as well as the weedkiller glyphosate. They’ve also made significant cuts to research funding for biotechnology products.

The Red de Acción en Plaguicidas y sus Alternativas para América Latina (Pesticide Action Network and its Alternatives for Latin America), better known as RAP-AL, was founded in 1983 as a network of organizations opposed to the use of pesticides and transgenics in agriculture, because these technologies are a “danger for human health and biological diversity.”

RAP-AL is based in Santiago de Chile, but has a presence in 17 countries in Latin America and the Caribbean. The group creates multimedia materials and training programs, promotes scientific studies about the environmental effects of pesticides, and provides legal assistance to local groups seeking to ban specific pesticides. Like so many other anti-GMO outfits, RAP-AL promotes a narrowly defined version of agroecology and organic farming as the only sustainable ways to produce food.

Grupo Semillas (Seeds Group) was founded in 1994 in Colombia to defend indigenous communities and small farmers, promote food security, and protect the environment. The organization has consistently opposed the use of pesticides and GM crops, though it claims to support “seed freedom.” Its work is based on the protection and promotion of Colombia’s native seeds, though it opposes the development of GM and gene-edited crops by local scientists that could bolster the country’s agricultural sector.

The group publishes a popular magazine called Semillas that serves as a vehicle for its campaigns, such as Alianza por la Agrobiodiversidad (Alliance for the Agrobiodiversity) and Red de Semillas Libres (Network of Free Seeds), both of which falsely set agroecology and native seed use against biotechnologies that help protect ecosystems and promote food sovereignty.