Viewpoint — ‘Selective skepticism’ and media hypocrisy: Why are liberal news sites vigilant in challenging COVID misinformation but give anti-biotechnology and chemical scare-mongers a free pass?

This article or excerpt is included in the GLP’s daily curated selection of ideologically diverse news, opinion and analysis of biotechnology innovation.
In recent months, the mainstream press has been on a crusade against COVID vaccine skepticism, tenaciously promoting science-based medicine and expressing little tolerance for anybody who holds a contrarian opinion. “Covid vaccine does not affect fertility but misinformation persists,” The Guardian announced in February, addressing a common concern about coronavirus immunizations. “A big reason we might never reach herd immunity,” an equally zealous CNN recently reported, “is because not enough people are willing to get vaccinated.”

These claims are perfectly defensible. While there are some preliminary concerns in the EU about rare side effects associated with AstraZeneca’s shot, the evidence so far shows that the authorized vaccines are safe and effective, even for pregnant women or those trying to get pregnant. [1] Yet, these same news outlets continue to show no interest in reporting all the facts when it comes to other critical science issues.

This is inexcusable for two reasons.

Since the press has made a habit of giving finger-wagging lectures about “following the science,” they need to consistently practice what they preach, especially when promoting calls to deplatform social media users who doubt the safety and efficacy of vaccines. More importantly, people tend to cherry-pick which science they embrace, usually along political lines. The media’s double standard legitimizes this partisan approach to science, giving policymakers and the public an excuse to ignore evidence they deem inconvenient.

“There is a tradition among journalists to stand up to the government, companies and other authorities they critically examine. However, this can sometimes lead to selective skepticism were claims that run counter to the beliefs of some science journalists are met with extreme skepticism, whereas information that appeals to the existing beliefs are accepted with much less skepticism.”

We see this all the time. The Washington Post only days ago published an article by prominent vaccine skeptics Stephanie Seneff and Jennifer Margulis, in which they alleged that the herbicide glyphosate was killing Florida’s manatees. That’s the same Seneff who blamed the COVID pandemic on glyphosate on a blog page hosted by Margulis. Seneff also predicted that 50 percent of US children would be autistic by 2025, thanks to glyphosate exposure. 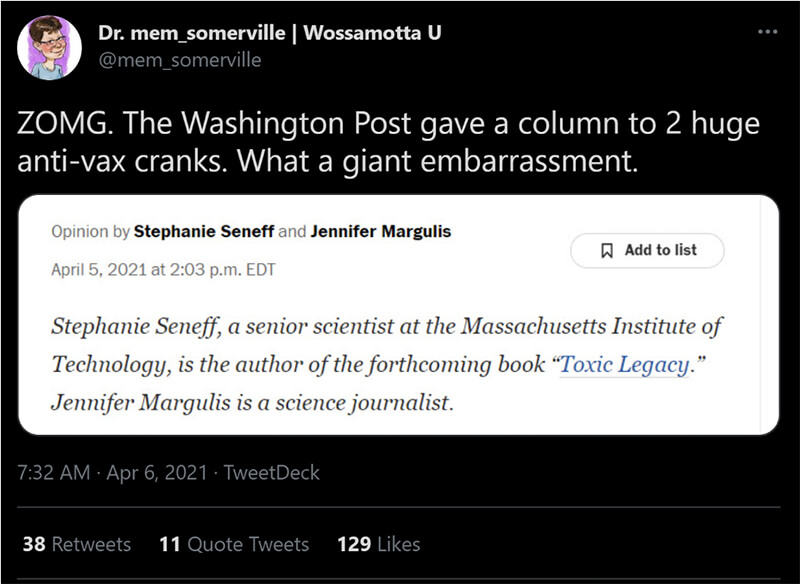 Moving on, CNN ran a naive article just three weeks ago about the Environmental Working Group’s Dirty Dozen, warning consumers that they should “Eat organic when possible” to avoid foods “contaminated” with pesticides, though there is no evidence to support such a recommendation. The story also included expert quotes from Healthy Babies Bright Futures, an advocacy group that needlessly scares parents about the alleged dangers of heavy-metal tainted baby food, and Leonardo Trasande, a pediatrician who has authored questionable research about the risks of exposure to common chemicals.

CNN included a short “industry response” from CropLife, a trade group that represents pesticide manufacturers. But it didn’t bother contacting an independent scientist who would have happily made mincemeat of EWG’s claims, and any number of experts would have volunteered for the job. The average reader, though, was given none of this vital context.

Not to be outdone, The Guardian continues to give a platform to anti-pesticide activist Carey Gillam, who insists, contra the evidence, that Monsanto (now owned by Bayer) tried to bury research showing that its weedkiller Roundup causes cancer. It’s also crucial to note that US Right to Know (USRTK), Gillam’s employer, is funded by the Organic Consumers Association, an anti-GMO group that rejects COVID-19 vaccines. This is the same Guardian that sought and received over $800,000 from an animal rights group in 2017 to run a series of slanted articles about livestock farming.

Anti-science activists generally aren’t single-issue crusaders. Many of the same “health freedom” advocates who deny the benefits of pesticides and vaccines also promote sham medical treatments, and they often work together. Deep skepticism of the entire scientific establishment is built into their worldview. When major news outlets allege that industry and regulators cover up the dangers of chemical exposure or animal agriculture, they’re endorsing the same conspiratorial thinking they warn the public to avoid when it comes to coronavirus. The predictable result is greater distrust of science and the media.

It’s not surprising that journalists make mistakes when covering complex science topics. Given the many pressures they face, simple oversights were forgivable. But the media regularly complains about the so-called “infodemic” plaguing the internet in our post-COVID era. News outlets criticize social media companies for promoting anti-vaccine content and psychoanalyze people prone to accepting coronavirus conspiracies. Rather shamelessly, the Washington Post has also offered tips to stop yourself from spreading “misinformation.” And the Guardian has even recommended “10 ideas to rebuild our broken internet.” Let’s add an eleventh: take your own advice and stop running sloppy stories because they attract eyeballs.

[1] I’m not making a judgment about AstraZeneca’s vaccine. As of this writing, the European Medicines Agency has determined that unusual blood clots “should be listed as very rare side effects of Vaxzevria (formerly COVID-19 Vaccine AstraZeneca) … the overall benefits of the vaccine in preventing COVID-19 outweigh the risks of side effects.” That determination may change as more data is gathered.
ADVERTISEMENT
ADVERTISEMENT