A new vaccine to protect against deadly cholera has been made by grinding up genetically modified grains of rice. The first human trial has shown no obvious side effects and a good immune response. Researchers based at the University of Tokyo and Chiba University have published the peer-reviewed results of the Phase 1 clinical trial of the vaccine, named MucoRice-CTB, in The Lancet Microbe.

Vaccine manufacturing has made enormous strides in 2020, spurred on by COVID-19. However, the complexity of mRNA-based SARS-CoV-2 vaccines has highlighted the value of inoculations that can be made, transported and stored cheaply and without refrigeration.

The MucoRice-CTB vaccine is stable at room temperature from start to finish.

“I’m very optimistic for the future of our MucoRice-CTB vaccine, especially because of the dose escalation results. Participants responded to the vaccine at the low, medium and high doses, with the largest immune response at the highest dose,” said Professor Hiroshi Kiyono, D.D.S., Ph.D., from the Institute of Medical Science at the University of Tokyo who leads the MucoRice project. Dr. Kiyono is also a faculty member at Chiba University in Japan and the University of California, San Diego, in the U.S.

Thirty volunteers received a placebo and groups of 10 volunteers received a total of four doses spaced every two weeks of either 3 milligrams (mg), 6 mg or 18 mg each of the vaccine. Tests two and four months after receiving the last dose revealed that volunteers who responded to the vaccine had IgA and IgG antibodies – two types of proteins the immune system produces to fight infections – specific to cholera toxin B (CTB). Participants who received a higher dose of vaccine were more likely to have CTB-specific antibodies. 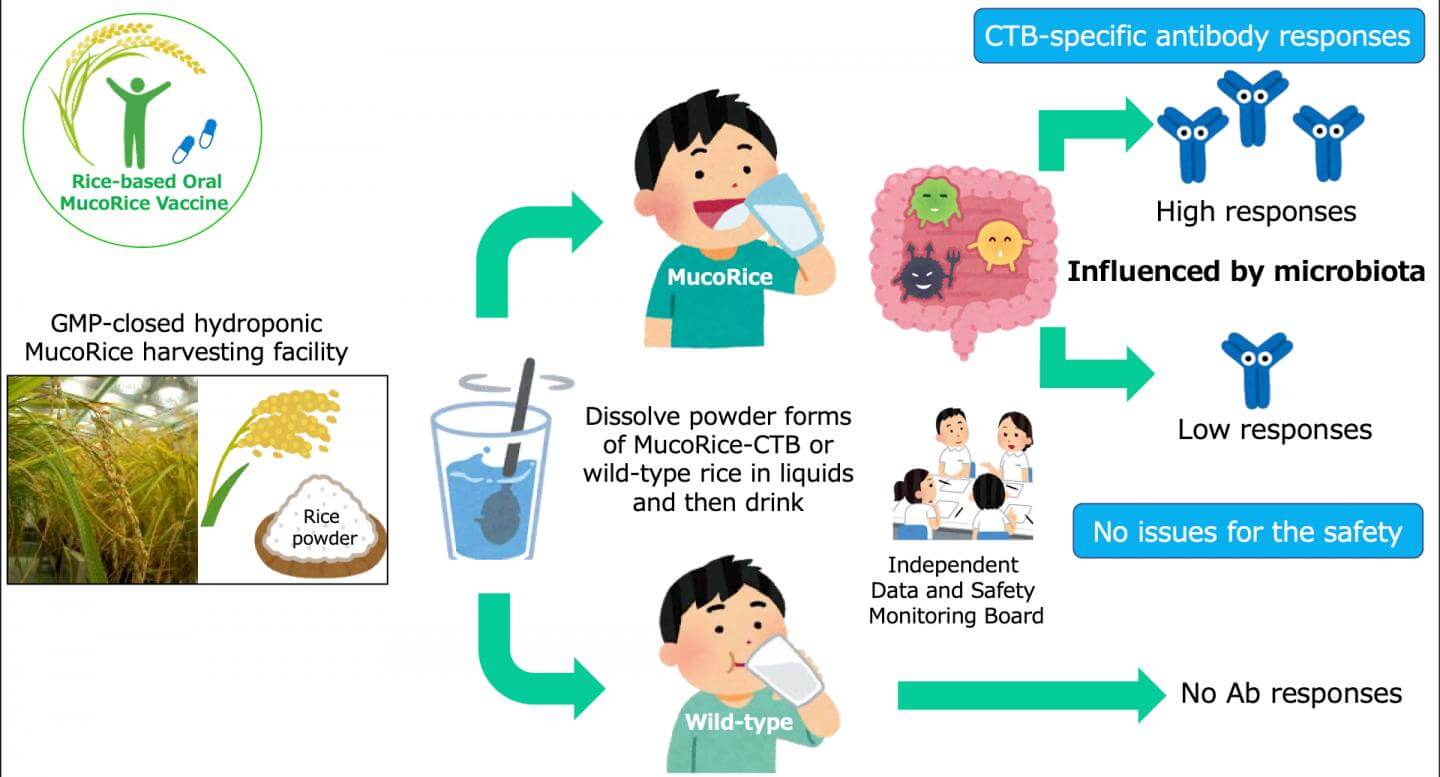 An independent review board found no evidence of significant side effects.

Growing a new type of vaccine Vibrio cholerae bacteria is spread most often by drinking water contaminated with sewage. Without medical attention, cholera can kill in mere hours due to diarrhea with severe dehydration. Cholera infects 1.3 million to 4 million people and causes 21,000 to 143,000 deaths each year, according to the World Health Organization.

There are four modern needle-free cholera vaccines, all of which are given as drops on the tongue, but require cold storage and are made from whole killed or live-attenuated (weakened) cholera cells.

The new cholera vaccine grows in genetically modified Japanese short-grain rice plants that produce a nontoxic portion of CTB that can be recognized by the immune system. CTB is similar in structure to a toxin made by some types of disease-causing E. coli bacteria, so cholera vaccines often provide cross protection against travelers’ diarrhea. 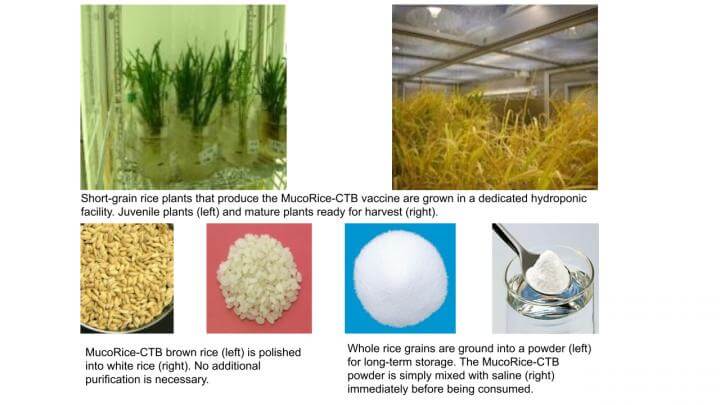 Researchers grow the rice plants in a purpose-built, indoor hydroponic farm that meets WHO good manufacturing practice standards for medicines, which ensures that the vaccine remains uncontaminated and that the plants are isolated from the natural environment.

The plants produce the CTB subunit in their seeds, the edible grains of rice, and store the antigens in droplets called protein bodies with membranes made of fat.

“The rice protein bodies behave like a natural capsule to deliver the antigen to the gut immune system,” said Dr. Kiyono.

Other medicines have been grown in plants, most often in the leaves – including treatments for Ebola, lymphoma and flu – but the drugs have to be extracted and purified before being used. The grain-based aspect of the MucoRice system avoids those extra steps, the need for cold storage, and protects the antigens as they travel through the harsh acid of the stomach.

When the plants are mature, the rice is harvested and ground into a fine powder, then sealed in aluminum packets for storage. When people are ready to be vaccinated, the powder is mixed with about 90 milliliters (1/3 U.S. cup) of liquid and then drunk. Researchers have only tested the vaccine using saline (a salt solution equivalent to body fluids), but they expect it would work equally well with plain water.

Immunity through the gut is strong, but complicated by the microbiome

“The beautiful part of our vaccine is that it wisely uses the body’s mucosal immune system through the gut for the induction of antigen-specific antibodies,” said Dr. Kiyono.

MucoRice-CTB enters the body through intestinal mucosal membranes, mimicking a natural way of encountering and responding to germs. Stimulating the mucosal immune system produces two classes of antibodies that identify germs and target them for removal, IgG and IgA. Vaccines that are injected under the skin or into a muscle generally increase only IgG, not IgA, antibodies.

Volunteers who responded to MucoRice-CTB had their highest blood levels of antigen-specific IgG and IgA after eight to 16 weeks.

However, 11 of the 30 volunteers who received the vaccine showed low or no measurable immune response. All study volunteers reported never traveling outside of Japan, so it is unlikely that they had any previous exposure or natural immunity to V. cholerae or pathogenic E. coli.

“When we saw those data about the 11 low and nonresponders, we thought maybe gut microflora have an influence on the outcome of the immune response,” Dr. Kiyono recalled.

The microflora or microbiome is the community of microorganisms that live in our bodies and either benefit us or are harmless. It is well accepted that the microflora of the digestive system influence health and immunity, but scientists are just beginning to understand the precise mechanisms of the relationship.

“In simplified terms, high responders had more diversified microflora, and in the low-responder group, diversity was much narrower,” said Dr. Kiyono.

Researchers cautioned that the small size of the Phase 1 study – giving the vaccine to only 30 healthy Japanese male volunteers – means the relevance and prevalence of nonresponders is still unclear and that the total difference in microflora diversity was subtle. However, the results do hint at the larger role of microflora in vaccine effectiveness.

The link between the gut microbiome and vaccine effectiveness has been previously revealed by the unfortunate fact that most vaccines are developed in industrialized nations and some are then less effective when delivered in developing countries. Mucosal vaccines, including oral vaccines against polio and cholera, seem especially prone to this disparity. Most scientific theories to explain the phenomenon focus on chronic intestinal inflammation linked to poor sanitation.

“Probably for every vaccination right now, even injected vaccines, we should think of the immune status of the individual based on the condition of their microflora,” said Dr. Kiyono.

It remains to be seen how microflora diversity will impact the global effectiveness of the new MucoRice edible vaccine system compared to other oral vaccines’ records.

For now, the researchers plan to work with partners in the pharmaceutical industry to bring MucoRice-CTB into the next phase of clinical trials in Japan and overseas.