Viewpoint: It’s time for a reassessment of the International Agency for Research on Cancer (IARC)’s role in sabotaging glyphosate, one of the world’s most popular — and safest — herbicides

This article or excerpt is included in the GLP’s daily curated selection of ideologically diverse news, opinion and analysis of biotechnology innovation.
As we’re in the midst of a reevaluation of whether the Virology Laboratory in Wuhan, China was the true source of the Covid-19 virus that caused the pandemic, a theory which the World Health Organization (WHO), many U.S. scientists, and the media rejected for over a year’s time, there is another issue that warrants a complete reexamination: The International Agency for Research on Cancer’s (IARC’s) assessment of glyphosate.

This is not a new issue. In fact, the ACSH has published numerous articles on this over the years, beginning in 2017. Currently, there is no transparent review process for the assessments of the IARC Monographs program, even when there is clear counter-evidence from many other respected organizations.  This resulted in the IARC assessment of glyphosate as the central document in billions of dollars of litigation that ultimately resulted in an $11 billion settlement in 2020 that resolved the bulk of the lawsuits claiming that Roundup (glyphosate) caused cancer.

I hope that we are finally at a place when a few influential scientists with integrity will have the courage to speak out and demand that the 2015 IARC assessment of glyphosate be retracted or revised.

Roundup (glyphosate) is the world’s best-selling weedkiller and has been used for over 45 years. It is effective against a wide variety of weeds and has lower toxicity compared to other products it has replaced (such as atrazine and alachlor).

In 2015, IARC classified glyphosate as “probably carcinogenic to humans.” IARC, based in Lyon, France, is a semi-autonomous unit of the WHO, the health agency for the United Nations. Since 1971, IARC has evaluated over 1000 chemicals or substances for inclusion in “IARC Monographs on the Identification of the of the Carcinogenic Risk to Humans” series. Two-thirds of the funding of the IARC Monograph program comes from U.S. agencies, with grants from the National Cancer Institute (NCI) and the National Institute of Environmental Health Sciences (NIEHS) totaling almost a million dollars per year.

The purpose of the IARC Monographs program is to evaluate the available scientific evidence to determine the likelihood that a chemical causes cancer. The evaluation is carried out by a “working group of independent international experts.” But how independent are they really? Most U.S. scientists are dependent on grants and contracts from U.S. agencies such as the NCI and NIEHS that support IARC. It would be foolhardy to speak out against IARC, which could threaten their standing in the scientific community and, therefore, their livelihood.

What do other agencies say?

Our scientists left no stone unturned in conducting this review. They had access to all relevant data and information from federal and provincial governments, international regulatory agencies, published scientific reports, and multiple pesticide manufacturers. To help ensure an unbiased assessment of the information, Health Canada selected a group of 20 of its own scientists who were not involved in the 2017 re-evaluation to evaluate the notices of objection

All of the other agencies conducted similarly detailed reviews. So why was IARC the only Agency to consider glyphosate a “probable human carcinogen”? 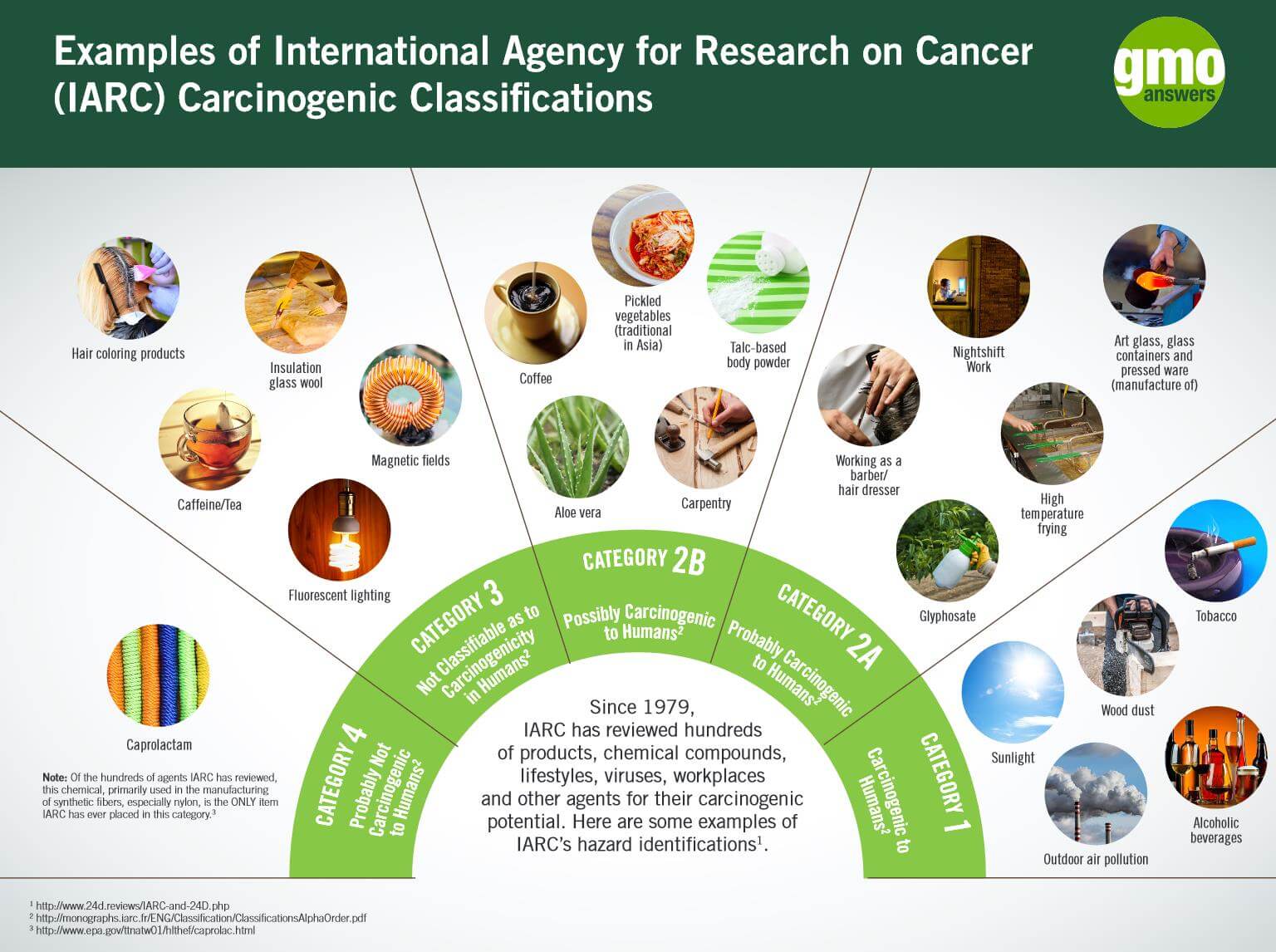 What is the basis for the IARC Classification?

The response from the scientific community has been to try and win the public debate by accusing the critics of IARC of being in the pockets of corporations.

Instead of welcoming and addressing criticism of IARC, in a 2015 letter and commentary published in the Journal of Environmental Perspectives, 124 scientists argue that the criticisms of IARC by a “vocal minority” may denigrate the process that has served public health well for many years. It is easy to see why so many scientists signed this letter. Their livelihood often depends on grants from NCI and NIEHS, the Agencies that support IARC, and criticism involving self-examination is never welcome in the scientific community.

Take a minute to review the reported conflicts of interest in this letter. To begin with:

This work was conducted with no direct funding, but was supported in part by the Intramural Research Program of the NIH (NCI and NIEHS). [emphasis added]

Many signators now serve as expert witnesses for plaintiffs in litigation around a host of chemicals and their effects. Others have served or continue to serve on IARC monograph working groups.

No matter how loud the voice, no matter how many people are speaking it, doesn’t make it true. But how can I tell?

One tell-tale sign is if your voice is suppressed or vilified when you try to question that voice.

Conflicts of interest are not simply financial but can often be belief-driven. The deliberate exclusion of scientists with conflicting interests in favor of glyphosate because of “bias” in IARC’s glyphosate study is an example. But when you cherry-pick your experts, you facilitate group-think, another bias that stifles the discourse that lies at the heart of science and these deliberations.

It is much easier to sign a letter of support than to actually examine the criticisms that may result in changes to a process that has benefited a select few scientists (those chosen to be on IARC Working Group panels) over the years. Despite all the back and forth about who was financially remunerated and by whom, it is important to recognize that there has been no scientific rationale put forth to justify the actions taken by IARC on glyphosate.

The U.S., as the major funder of the IARC Monographs program, should insist that IARC develop a transparent review and appeals process. In addition, the U.S. needs to ensure that IARC’s conflict of interest policy is changed to include conflicts such as working as litigation consultants in trial lawsuits.  Finally, as stated earlier, the IARC assessment of glyphosate should be retracted or revised.

The systematic exclusion by IARC of researchers with real or perceived industry conflicts of interest decreases the likelihood that the strongest arguments defending a suspect agent against claims of carcinogenicity will be presented and discussed during Working Group deliberations, and thus increases the probability that the agent will be classified as posing a carcinogenic hazard to humans, regardless of the strength or weakness of evidence supporting that conclusion.

Susan Goldhaber, M.P.H., is an environmental toxicologist with over 40 years’ experience working at   Federal and State agencies and in the private sector, emphasizing issues concerning chemicals in drinking water, air, and hazardous waste.  Her current focus is on translating scientific data into usable information for the public.