Instituted to protect our food, the ‘precautionary principle’ often perpetuates fears and does more harm than good

This article or excerpt is included in the GLP’s daily curated selection of ideologically diverse news, opinion and analysis of biotechnology innovation.
The origin of the term “better safe than sorry” goes back to a book written in 1837, Rory O’More. The rest of the phrase is, “It makes sense (and is certainly safer to take precautionary measures before anything bad happens).” A lot of parents use the safe/sorry logic on kids when they admonish them to stop playing in the street or put on sunscreen. In regulatory agencies, this sentiment has given rise to overestimating risks and using the “precautionary principle” when managing them.

Both overestimating risks and using the precautionary principle were used in Rachel Carson’s Silent Spring — her call to ban DDT, a powerful insecticide. After she was successful, the number of cases of malaria in South Africa went from 8,500 to 42,000 resulting in an additional 300 deaths. By the 1970s, the overall number of cases of malaria went to 6 million. Now the lack of DDT has brought on brain-damaged babies with Zika, a mosquito-borne disease.

The latter part of “better safe than sorry,” i.e., “taking precautionary measures,” needs to be used in conjunction with a saying attributable to the late Nobel Prize winning economist, James Buchanan, who said “as compared to what?” When considering banning a product, or reducing its use (perhaps by making it more expensive), you have to compare the substitute. In the case of DDT, there are other pesticides (e.g., pyrethroids), but they aren’t as effective.

There are movies that popularize the “As compared to what?” choices. The popular driving app called Waze directs people to take different routes to minimize driving time. Of course, there are many silly movies that warn against taking the road less traveled like encountering inbred cannibals in off-roads in the mountains.

That’s silly but it’s also crazy not to consider the alternatives when employing safe/sorry precautions. Today, there is an entire science devoted to this notion called “risk/risk analysis.” This type of analysis compares the target risk, like the risks of DDT to wildlife; to the replacement risk, like using less effective pesticides resulting in increased malaria and other diseases.

Food and color additives are used to make foods safer, fresher, as well as taste or look better. But whether or not they can be used in food relies on FDA approval. Here’s an example where the FDA banned 6 food additives – even though they admitted that they do not pose a risk to public health under the conditions of their intended use. They overestimated the risk but didn’t know which additives would replace the banned ones.

They were required to ban the additives (and not consider the replacements) because of a sixty year old law, the Delaney Clause. It says that, if a food or color additive causes cancer in rodents, they are not allowed in the food supply. A food additive is said to “cause” cancer when it is present in a food at a tiny fraction of the amount at which excess cancers would be seen in a rodent study.

Related article:  By 2030, nearly half of Americans will be classified as obese: From gene manipulation to lifestyle changes, here are rays of hope 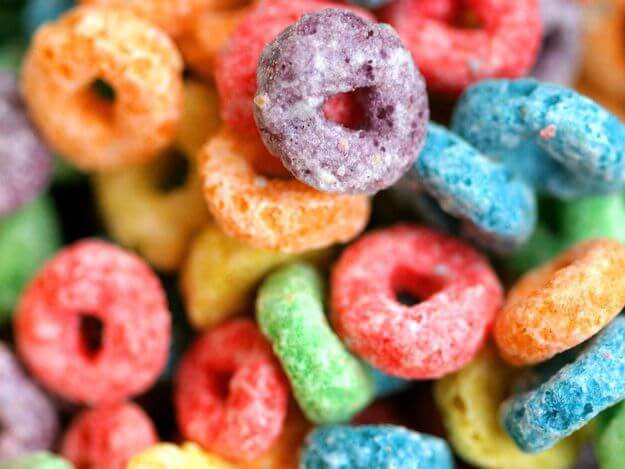 How tiny can be illustrated by comparing the type of analysis to set the additive tolerance to setting a speed limit in a school zone. For additives, once scientists determine the lowest dose, i.e., an exposure level, at which the food or color additive does not cause excess cancers, they then divide that level by anywhere between 100 and 10,000.

Now let’s see what happens to the speed limit using that type of logic. Most school districts appear to have set 15 mph as the safe speed.

If we used the same formula for figuring out a safe dose of food additives, color additives or pesticides to determine what the speed limit should be in school zones, we would get an entirely different number. Assume that 15 mph is the speed at which there are no deaths from driving (although there may be from disease or other accidents).

Now let’s assume that not all drivers have the same abilities in all school districts so, just to be safe, let’s divide that level by 10 (to get 1.5 mph). When we do animal studies for additives, we assume some humans are more sensitive than lab rodents, so we divide the lowest dose where there is no effect by 10.

Next, not everyone’s car is in perfect shape. For example, some may have brakes that need repair, so let’s divide the last number by 10 as well (to get .015 mph). We do the same, i.e., divide by 10 again, with the additives because we assume that humans are more heterogeneous than rodents.

We’re not finished yet. Let’s also assume that some teenagers who have less experience than other drivers will drive through the school zone. Let’s divide again by 10 to get .0015 mph. We do that for additives when we feel like children may be exposed to the additive.

So if the tiny fraction of an additive is in a food after all that division, it has to go. It goes beyond any reasonable idea of safety and, depending on what takes its place, may not be safe at all.

Here’s a chart showing these calculations: 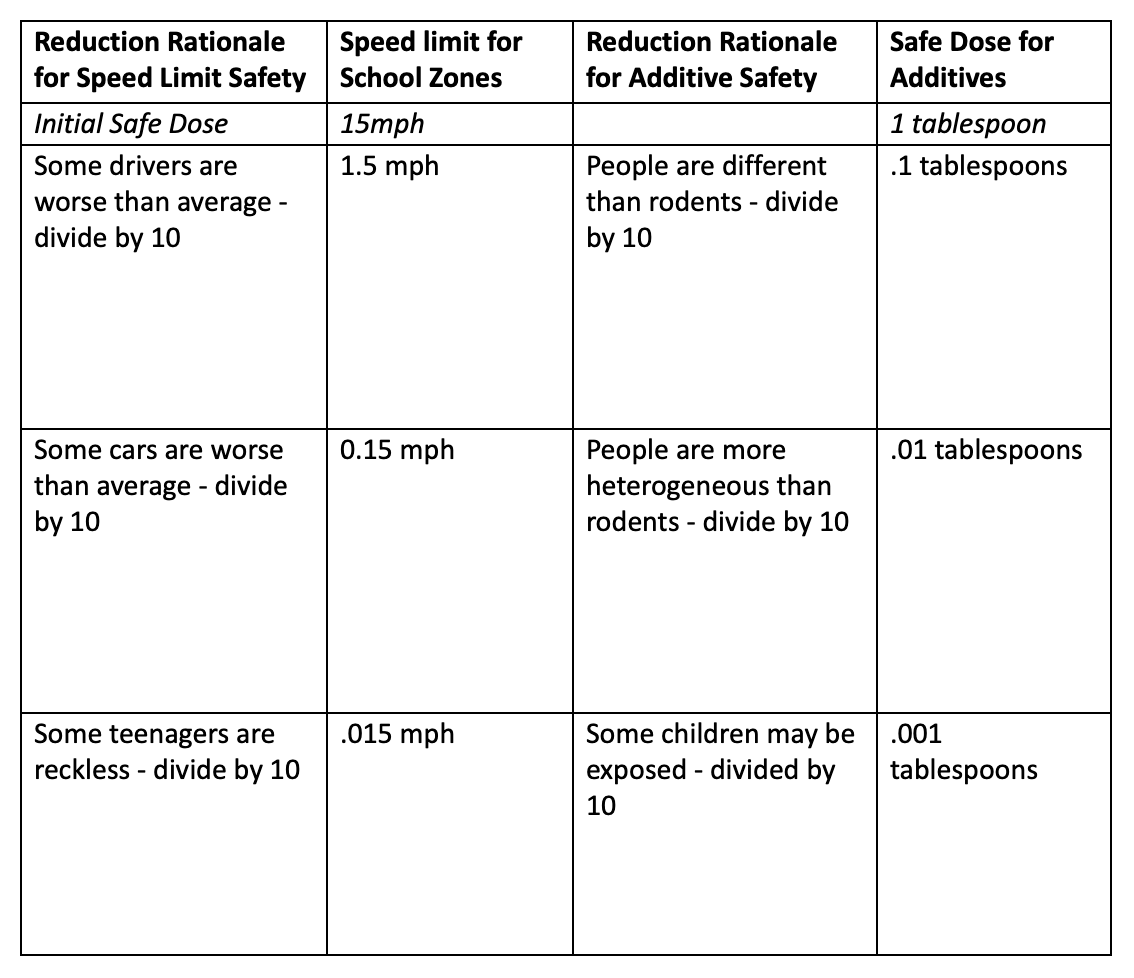