Judy Carman (born January 31, 1964) is an academic and anti-GMO activist. Her vanity site—GMO Judy Carman—was established by Henry Rowlands, the cybermaster behind GMO Seralini and the pro-organic website SustainablePulse, which promotes claims that genetically modified foods are unsafe despite the findings of every major independent science organizations that they are as safe or safer than other conventional or organic foods.

Carman is best known for her studies on GMOs and pigs. She became (in)famous in 2013 after publishing a study in the little-known open access Journal of Organic Systems purporting to show evidence of a link between genetically modified maize and inflammation of the stomach in pigs. specializing in epidemiology and biostatistics.

There is no field evidence corroborating Carman’s claims. Writing last year in the Journal of Animal Science, in the most comprehensive study of GMOs and food ever conducted, University of California-Davis Department of Animal Science geneticist Alison Van Eenennaam and research assistant Amy E. Young reviewed 29 years of livestock productivity and health data from both before and after the introduction of genetically engineered animal feed.

What did they find? That GM feed is safe and nutritionally equivalent to non-GMO feed. There was no indication of any unusual trends in the health of animals over 18 years since 1996 when GMO crops were first harvested.

Carman’s questionable research has become a tool of anti-GMO activist groups, which gleefully promoted her findings with press releases (for example here and here) calling the study “groundbreaking,” asserting that it was evidence of “adverse effects” due to GMO feed, and claiming that the results show “…clear evidence that regulators need to safety assess GM crops containing mixtures of GM genes, regardless of whether those genes occur in the one GM plant or in a mixture of GM plants eaten in the same meal, even if regulators have already assessed GM plants containing single GM genes in the mixture.”

If you have stomach problems or gastrointestinal problems, a new study led by Dr. Judy Carman may help explain why: pigs fed a diet of genetically engineered soy and corn showed a 267% increase in severe stomach inflammation compared to those fed non-GMO diets. In males, the difference was even more pronounced: a 400% increase. (For the record, most autistic children are males, and nearly all of them have severe intestinal inflammation.)

The study was conducted on 168 young pigs on an authentic farm environment and was carried out over a 23-week period by eight researchers across Australia and the USA. The lead researcher, Dr. Judy Carman, is from the Institute of Health and Environmental Research in Kensington Park, Australia. The study has now been published in the Journal of Organic Systems, a peer-reviewed science journal. 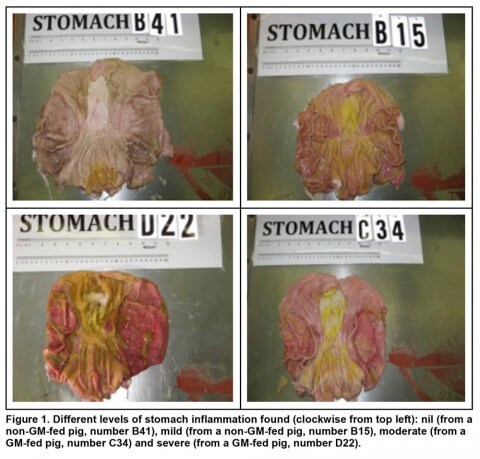 Carman has a Bachelor of Science, an Honors Degree in Organic Chemistry, a PhD in Medicine in the field of nutritional biochemistry and metabolic regulation, and a Master of Public Health. She also has a Master of Public Health, specializing in epidemiology and biostatistics. She has taught at two universities and an agricultural college, worked at the CSIRO in human nutrition, worked in   HIV/AIDS and nutrition in Sydney, was Senior Epidemiologist at the Communicable Disease Control Branch of the SA Health Department investigating outbreak of diseases, and has also worked in the Australian Institute of Health and Welfare’s National Injury Surveillance Unit.[1]

She has many years of experience teaching at various tertiary institutions, including an agricultural college, and Senior Lecturer positions at both Flinders and Adelaide Universities. She has also advised parliamentarians, government and non-government organisations and industry bodies on various matters. She has claimed to be an associate professor at Flinders University, although she is not found on the staff directory listing for this university and the university has publicly stated she has no affiliation with that university.

Carman is now the director of the Institute for Health and Environmental Research (IHER) an anti-GMO group composed of three people whose claim to existence is supported solely by a South Australian PO box.

Judy Carman is founder and director of the Institute of Health and Environmental Research Inc. (IHER) is a not-for-profit research institute with a scientific interest in the safety of genetically modified (GM) organisms, particularly those destined for food. IHER was registered as an “association” under the Australian Securities and Investment Commission in 2003. IHER has no official website or other public face. They are a registered charity Charity ABN16361647606 with the contact information: [email protected], PO Box 155 Kensington Park SA 5068. Their incorporating papers were filed by Mark Parnell, solicitor for Environmental Defenders Office (SA), Inc. in Adelaide. Board members include: Brian Attwood (a representative of Consumers Association of South Australia[2]), Judith Carman, Catherine Clinch-Jones, and Davies Philip. Their 2012 operating finances reported income of less than $300 (AUS) and expenses of $13,000 (AUS) with reserves of $7,000 (AUS).[3] Carman’s IHER documents were prepared by Mark Feldman of Feldman Chiropractic. Feldman is an American chiropractor who has relocated to Australia.[4]

Carman and co-publishing ally Jack Heinemann are affiliated with the Safe Food Foundation and Institute in Australia which sponsored the publication of their research claiming GM Wheat had human health and safety risks. The Safe Food Foundation and Institute is an organic industry funded and led private non-charitable status group which promotes organic foods as safer while publishing claims that conventional crop protection and plant biotechnology practices not allowed by organic production are unsafe.[5]

The study was roundly criticized by dozens of science and biotechnology industry groups (see criticism section) for flaws and undisclosed conflicts of interest with organic industry funding and Maharishi cult support.

Titled “A long-term toxicology study on pigs fed a combined genetically modified (GM) soy and GM maize diet”, the study has been described by surgical oncologist and research scientist David Gorski as “a massive fishing expedition”,as the study did not present a hypothesis to test and picked a wide variety of variables to compare without providing a reason as to why those particular variables were chosen. The researchers fed one group of pigs a diet of “widely-used varieties of GM soy and GM corn”, and another group of pigs were fed non-modified maize and soy as a control. They let the pigs mature as usual, and autopsied them after slaughter in an attempt to find any difference between the two. Unsurprisingly, they found differences.

According to David Gorski:

Carman’s study resembles the Seralini study in that it basically looks at a whole lot of outcomes in a fairly arbitrary fashion and cherry picks the inevitable “positive” result. In fact, if you take all the groups together, there actually appears to be a non-statistically significant trend towards less stomach inflammation in the GMO group. Yes, less. As Karl Haro von Mogel put it, the authors appeared to be “trying to shoe-horn individual categories that aren’t binary data into a statistical test designed for binary data is the wrong approach.” Basically, however you look at it, there’s just no “there” there. Analyzed correctly, there is no statistically significant (or, no doubt, biologically significant) difference in stomach inflammation in this study. As for the reported increase in uterus weights, as Professor David Spiegelhalter, Winton Professor of the Public Understanding of Risk at the University of Cambridge points out, “There are also 19 other reported statistical tests, which means we would expect one significant association just by chance: and so the apparent difference in uterus weight is likely to be a false positive.”

The bottom line is that there are many, many problems with this study, the totality of which are more than enough to render its results meaningless. There is no dose-dependent mechanism for the effects reported, no rhyme or reason consistent with a mechanism that would explain why GMOs would affect just the stomach (and then only to cause severe inflammation) and uterus size. The study was a fishing expedition and not hypothesis-driven. It’s not surprising that it found something. I’d be shocked if it hadn’t. In the end, this study abused a fairly large number of innocent pigs to produce no useful data. She might try to defend it against criticism, but she basically fails. In particular, one notes that she can’t seem to defend against the charge of a lack of hypothesis and that she didn’t even try to defend the criticism that she didn’t bother to look at stomach histology to verify that there really was inflammation in the gastric mucosa, despite Carman’s touting that the “authors have over 60 years of combined experience and expertise in medicine, animal husbandry, animal nutrition, animal health, veterinary science, biochemistry, toxicology, medical research, histology, risk assessment, epidemiology and statistics.” Sad that they didn’t use all that experience to produce a paper whose results are believable and useful.

They claimed that they had unearthed an issue with GMO wheat being studied by the Australian CSIRO researchers. The wheat under investigation has shown to provide improvements in digestive health in animal studies and could potentially lower the glycemic index of foods. SFF threw a press conference, did a YouTube video, and managed to get some press about it. Here’s a New Zealand newspaper that picked up the claims. But as the story unfolded, it quickly became apparent that their claims were wrong and irresponsible.

Biology Fortified, among other science-based websites, provided a devastating critique of the report, demonstrating it was based on copious amounts of incorrect sequence data and on sleight-of-hand with bioinformatics tools.