La Via Campesina, which translates literally to “the peasants way” and is also known as the International Peasants Movement, was founded in 1993 in Mons, Belgium, by a group of small-scale producers representing four continents — Europe, Asia, North America, and Africa. It has grown into a large an international movement compromised of peasants, small and medium-size farmers, landless people, indigenous people, migrants and agricultural workers from around the world.

La Via Campesina believes that poverty and hunger are not caused by food scarcity, but by social injustice. It is arguably most known for coining the term “food sovereignty” which it debuted at the 1996 World Food Day in Rome, Italy. From its website:

Food sovereignty is the right of peoples to healthy and culturally appropriate food produced through ecologically sound and sustainable methods, and their right to define their own food and agriculture systems. It puts those who produce, distribute and consume food at the heart of food systems and policies rather than the demands of markets and corporations.

Food sovereignty, according to a declaration made during a 2008 summit, is also about prioritizing local and national economies and empowering small scale food production such as family farms, “artisanal” fishing, pastoralist-led grazing and food production, distribution and consumption based on environmental, social and economic sustainability. It has become a strong rallying cry around the world for those who are looking to remove corporation influences from agriculture and from the food supply.

However, it has also been used to argue against the successes of the Green Revolution on the grounds that it went against the best interest of peasants. The Green Revolution, which was led by Nobel Peace Prize winning scientist Norman Borlaug, refers to developments in plant breeding between the 1960s and 1980s that improved yields from major cereal crops, particularly wheat and rice, and other staple crops. Borlaug is credited with saving over a billion people from starvation. La Via Campesina sees the Borlaug’s legacy as an attempt to push western principles on other countries and peasants, and in general the Green Revolution’s goals are not seen as being inline with the goals of food sovereignty, from the La Via Campesina site:

The Green Revolution fully ignored the role of democratic policy, which avoids ecological and social costs while ensuring that food production and food producers remain vital to their society and culture. From the perspective of family farmers and peasants who revere Food Sovereignty, sustainable, democratic foods that respect ecology, culture and diversity of economic opportunity offer a lot more than just improving the equality, quantity or availability of food for current and future generations.

This outlook has led today to La Via Camprsina speaking out frequently against the Gates Foundation for Bill and Melinda’s philanthropic working around the world and in particular Africa. Dena Hoff the North American coordinator of La Via Campesina, said of the Gate’s Foundations work:

Foundations, however well meaning, should not be setting food and agricultural policies for any nation of peoples. Democracy demands the informed participation of civil society to determine what is in the best interest of each nation’s population…

However, the Gates Foundation has long been credited for working with nations and without corporate influence. For example, its recent work on a biofortified banana that was created to help with vitamin A deficiency in Africa was made in conjunction with local and national governments in Uganda and not corporations. The Gates Foundation has been instrumental in removing corporate ties to golden rice and has worked to make golden rice available to countries looking to grow the enhanced crop.

La Via Campesina does not believe the western way of agriculture that relies of fertilizers, weed killers, and modified crops are beneficial for farmers. In particular it has consistently campaigned against GMOs which it sees as a mechanism for corporations to have control of food sovereignty. It in particular campaigns against contract farming and the use of agricultural chemicals, which it sees as unnecessary and harmful to the environment and farmers.

It has been particularly active in Mexico, where the government has been debating the adoption of and testing GMOs. In November of 2012, Alberto Gomez, of Via Campesina Mexico, noted about his country’s potential adoption of GMOs:

For the past twenty years, the Mexican Government has been jeopardizing our food sovereignty by opening agriculture to free trade, flooding us with cheap, low quality maize and leaving thousands of peasants in poverty. Now they want to poison us with GM maize. We won’t allow it. 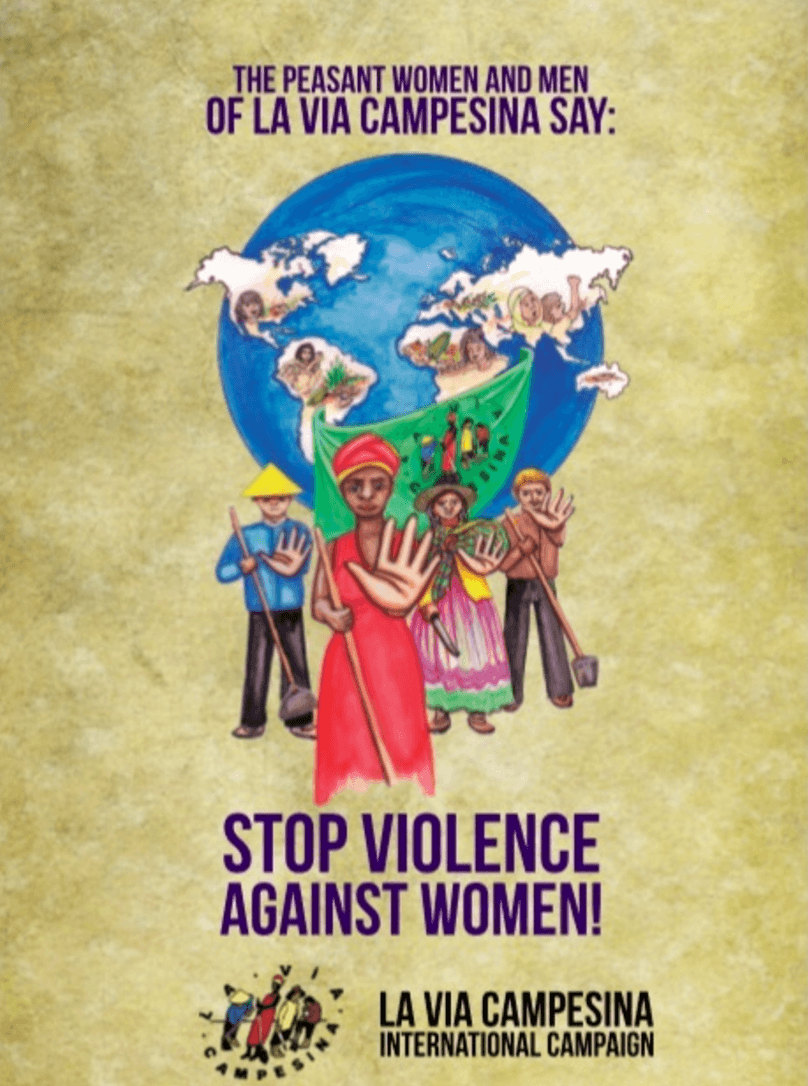 In January of 2013, La Via Campesina staged a hunger strike in Mexico to protest against the testing of GMO corn by the Mexican government, the strike was ultimately unsuccessful as testing of the crops is still ongoing.

La Va Campesina has been very outspoken against land grabbing — the buying or leasing of large pieces of land in developing countries, by domestic and transnational companies, governments, and individuals — and free trade. It has also been very vocal in supporting women around the word, particularly women in farming and it has spoken out frequently about stopping violence against women. Chapters are very active around the world on International Women’s Day (March 8).

Many scholars have argued against La Via Campesina’s central tenant, food sovereignty for a variety of reasons. Sociologist Harry Berstein, the former editor of the Journal of Peasant Studies and an emeritus professor of development studies at the University of London, has criticized food sovereignty for assuming the needs of all peasants are the same. He explained this in 2014 at a conference at Yale University:

Philipp Aerni, director of the Center for Corporate Responsibility and Sustainability at the University of Zurich has been critical of the food sovereignty’s conflation of innovation and technology with corporations. In a 2012 paper published in African Technology Development Forum Journal he explained:

The Food Sovereignty movement still has a chance to avoid being remembered as just another ‘let them eat cake movement’ if it is able to separate science from politics. Sustainable agro-ecosystem management practices are important, but so are investment in user-friendly new agricultural technologies, product innovation, rural infrastructures and post harvest technologies…[F]ood sovereignty activists should collaborate with innovative companies rather than simply denouncing them as representatives of ‘the corporate regime.’

Aerni believes that if the movement is to be apart of progressing the peasants movement, its solutions for the future must adapt:

The movement could either become an obstacle to future food security, if it sticks to its ideology-based and confrontational rhetoric, or part of the solution, if it decides to extend collaboration beyond like-minded groups and engage in joint pragmatic action.

Via Campesina is based on the decentralization of power between nine regions. The coordination among the regions is taken up by the International Coordinating Committee which is composed of one woman and one man for every region, elected by the member organizations in the respective regions. The international secretariat rotates according to the collective decision made every four years by the International Conference. It was first in Belgium (1993-1996), then in Honduras (1997-2004) and in Indonesia until 2013. Since september 2013, the secretariat is based in Harare, Zimbawe.

Via Campesina claims broad membership alliances and the following campaigns and initiatives are noted in their 2012 “Combat Monsanto” report.