Are GMO foods ‘substantially equivalent’ to non-GMO foods, as the FDA maintains? 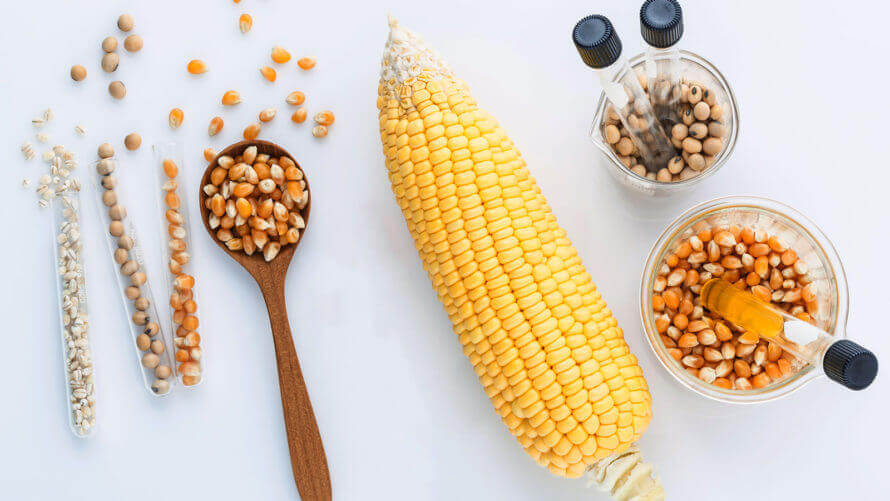 One of the primary requirements in commercializing a genetically modified (GM) crop is the proof of its substantial equivalence with its non-GM counterpart . According to [the World Health Organization], GM foods currently available on the international market have passed safety evaluations and are not likely to present risks for human health.

—International Service for the Acquisition of Agri-biotech Applications (ISAAA)

Several new studies carried out by scientists independent of the biotech industry are showing up glaring differences between GMOs and their unmodified versions. This makes a mockery of the regulatory principle of 'Substantial Equivalence' which has facilitated approvals of GMOs with practically no protection for public health and the environment.

—Eva Sirinathsinghji, neurogeneticist at the Institute of Science in Society

If there is one concept that defines much of the divide in the GMO debate, it’s the concept of “substantial equivalence,” one of the standards by which regulators assess the safety of genetically engineered crops before they enter the market. “Substantial equivalence” has been applied to foods since 1993.

To get Food and Drug Administration (FDA) approval, manufacturers have to show that their new product ‘works’ essentially like existing, already approved products, among other requirements. This process was later extended to cover foods because plants vary a lot, even from plant to plant, whether they are conventionally or organically grown, transgenic (have ‘foreign’ genes) cisgenic (do not), or bred using newer gene-editing techniques such as CRISPR.

After a rigorous review, if a new plant or food is deemed substantially equivalent to its already available conventional counterpart, farmers are permitted to grow it commercially. If not, it must undergo additional evaluation to determine if it poses an unnecessary risk to consumers.

Proponents see this framework as a common sense way to determine if heightened regulatory scrutiny of a new product is warranted. In contrast, critics of genetic engineering see substantial equivalence as a sleight of hand or legalistic loophole used by industry and its proponents to evade appropriate scrutiny. They ask how the FDA can declare a novel product to be substantially equivalent to its parent variety or breed when its genome has been altered.

That suspicious characterization is nearly always based on a misunderstanding of substantial equivalence. “Substantially equivalent” means that the properties of, say, a novel tomato lie within the range of properties of all tomatoes. The scientific consensus on genetic engineering, based on approximately 3,000 studies, is that the process is not substantially more risky than traditional breeding methods, and that all breeding methods carry some small risks of harmful, unintended consequences. Indeed, many scientists see the relative precision of moving one or two genes to improve a plant or animal as less likely to introduce unintended consequences than traditional breeding methods, mutagenesis in particular.

With greater regulatory scrutiny applied to biotech products than organic or conventional equivalents, a reasonable case can be made that foods derived from GMO plants actually present fewer health risks to consumers, though no foods currently on the market are considered harmful to human health.

Since the mid 1990s, critics of crop biotechnology have alleged that genetic engineering could make unintended, harmful changes to a food crop’s DNA. As a result, “…. genetically modified crops have the potential to introduce new toxins or allergens into our food ” organic industry group Just Label It has claimed. Critics further allege that the FDA could accidentally allow dangerous crops onto the market because the agency universally declared GMO crops “substantially equivalent” to their conventional counterparts in 1992. Anti-GMO Green America summarized activist concerns in this infographic: 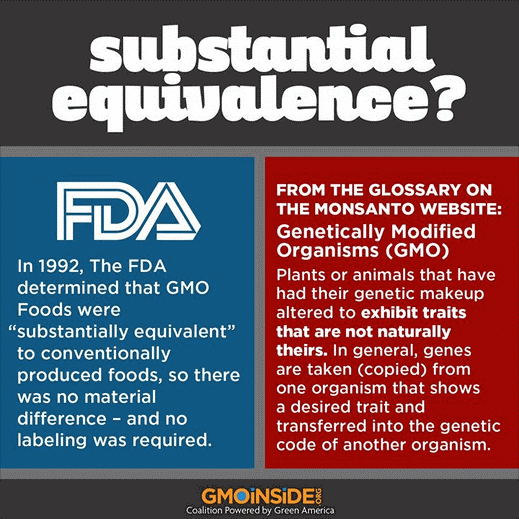 The regulatory status of a food is dependent upon objective characteristics of the food and the intended use of the food .

It should be noted that substantial equivalence, though often associated with biotech crops, is a regulatory concept used by safety regulators to analyze a broad range of new products, including medical devices and generic and biosimilar drugs. It was extended to food safety in 1993. Substantial equivalence isn’t a universal assumption; it’s a science-based conclusion embraced only after extensive testing of the product.

Food safety regulators in the US, Canada, Australia, New Zealand and many other countries use substantial equivalence to assess how much scrutiny a new food product requires before being commercialized. If a new food is judged to be substantially equivalent to foods that are already considered safe, either through previous testing or, more often, through a long history of use, then regulators do not require animal feeding studies or other long, expensive demonstrations of safety. If not, the product is evaluated as a new food additive and faces further safety scrutiny.

All crops vary from generation to generation. Variation can occur as an evolutionary process or from breeding techniques. Corn, for example, contains more nucleotide polymorphisms (small variations in gene sequence) than a tomato. Substantial equivalence looks at where a cultivar falls within the range of variation found within the domesticated species.

USDA scientist Owen Hoekenga, in an important 2008 paper, wrote that the variation in corn is so high that “two maize varieties may be as different from each other as humans are from chimpanzees on the DNA level.” But these varieties can still be considered “substantially equivalent” because they clearly fall within the range of what we recognize as maize, whether that is color, shape of the ear, or nutritional content.

Determining substantial equivalence depends first on establishing the extent of this range of variation within the species the new plant belongs to. In order to establish substantial equivalence, scientists perform what’s called a compositional analysis of a wide range of samples of the parent plant variety. They map the range of macro- and micro-nutrients, anti-nutrients and toxic molecules produced by this plant and compare these results to those of the new crop.

It’s much the same for new genetically engineered crops. Existing data is examined for original crop variation, and then a new trans- or cisgenic crop is compared along the same metrics. If the new crop lies within that original range of variation, then it is “substantially equivalent.” Note that even after a finding of substantial equivalence, most new GE crops go through extensive testing, with federal regulators reviewing reams of data before the products are introduced, a process covering on average seven years and costing $135 million.

Related article:  What are mutagenized crops and why they are not labeled and regulated?

Before the GMO Rainbow papaya, engineered to resist ringspot virus, was released to Hawaiian growers, it was subjected to compositional analysis to compare it to its conventional counterpart. Summarizing the evaluation process, the authors of a 2011 study explained:

The nutritional composition of Rainbow papaya and a non-transgenic control were analyzed to address GE food safety concerns regarding the potential for altered nutritional composition and altered expression of inherent allergens and toxic proteins. Rainbow papaya fruit were analyzed at three ripening stages and the data compared to that of a non-transgenic papaya which shares a similar pedigree. No differences were observed between GE and non-GE papaya for 36 nutrients at any of the tested fruit ripeness stages . Our data show . that the Rainbow cultivar is substantially similar to the non-GE cultivar.

Opponents of substantial equivalence (which include EU member states that do not use this concept in their regulation of GE crops) object to this standard because there’s no clear statistical “hard” basis and no quantitative range of effects (such as a standard deviation, or p-value) that determines the border of “equivalent.” Furthermore, they claim there is no way to predict unintended (or unexpected) surprise effects. For example, activist critics complain that GMO crops sometimes appear to contain substantially more (or less) of a given nutrient found in conventional crops. Jeffrey Smith, head of the one-man Institute for Responsible Technology, has argued that GMO soybeans contain 14 percent less isoflavones, a class of nutrients that affects hormone production.

However, Smith didn’t address the fact that plants can naturally contain varying amounts of the same nutrient, depending on how and where they were grown. Scientists, therefore, set a range of variation deemed acceptable when evaluating the nutrient content of new GMO crops. GMO crops sometimes contain more of a particular nutrient than they otherwise would, or contain a nutrient they normally wouldn’t contain at all, such as beta-carotene in Golden Rice, engineered to combat vitamin A deficiency in developing countries. These products are nonetheless subjected to rigorous testing to ensure they are safe for human consumption.

Regulations governing GMO crops are far more strict when a plant is engineered to contain a trait its conventional counterparts lack. Insect-resistant Bt crops, for instance, which possess genes from the soil bacterium Bacillus thuringiensis, underwent extensive testing beyond substantial equivalence before they were approved. Animal feeding trials were required to establish the safety of these crops. Any potential environmental impacts were further assessed separately by the EPA, the federal agency that regulates pesticide use in the US. The Rainbow papaya was also subjected to additional review by the EPA since it conferred virus resistance to the fruit.

Substantial equivalence has an impressive safety record, according to the authors of a 2013 study. “The compositional equivalency between genetically modified (GM) crops and nontransgenic comparators has been a fundamental component of human health safety assessment for 20 years,” they noted.” After two decades, suspect unintended compositional effects that could be caused by genetic modification have not materialized.” In 2016, the prestigious National Academies of Science agreed:

Statistically significant differences in nutrient and chemical composition have been found between GE and non-GE plants by using traditional methods of compositional analysis, but the difference have been considered to fall within the range of naturally occurring variation found in currently available non-GE crops.

In the 1960s, long before the advent of GMO crops, celery breeders developed a variety of celery that produced higher levels of psoralens, a natural insecticide. The celery was deemed “not substantially equivalent” and had to be pulled off the market when it gave farm workers rashes due to phytophotodermatitis.

Also in the 1960s, hoping to produce a better potato chip, scientists developed a potato that produced more of the neurotoxin solanine. Potatoes naturally make the chemical to ward off insects, but this particular variety produced a high enough dose to make humans sick, so it was never deemed substantially equivalent and not commercialized. The potential ‘substantial equivalence’ of all crops, regardless of how they were bred, is evaluated using the same standards.

One of the primary requirements in commercializing a genetically engineered crop is the proof of its substantial equivalence with its non-GM counterpart. In other words, substantial equivalence means that a new product must be the same as the non-genetically engineered crop except for the traits that were enhanced, added, or removed through genetic engineering.

“Virtually all breeding techniques have potential to create unexpected effects,” the FDA noted in its 1992 statement establishing its substantial equivalence policy that has succeeded in its goal of protecting the food supply. The fact that we can count the number of dangerous food crops on one hand shows that our food supply is safe and nutritious and GMO crops currently on the market are as safe as their non-GM counterparts.