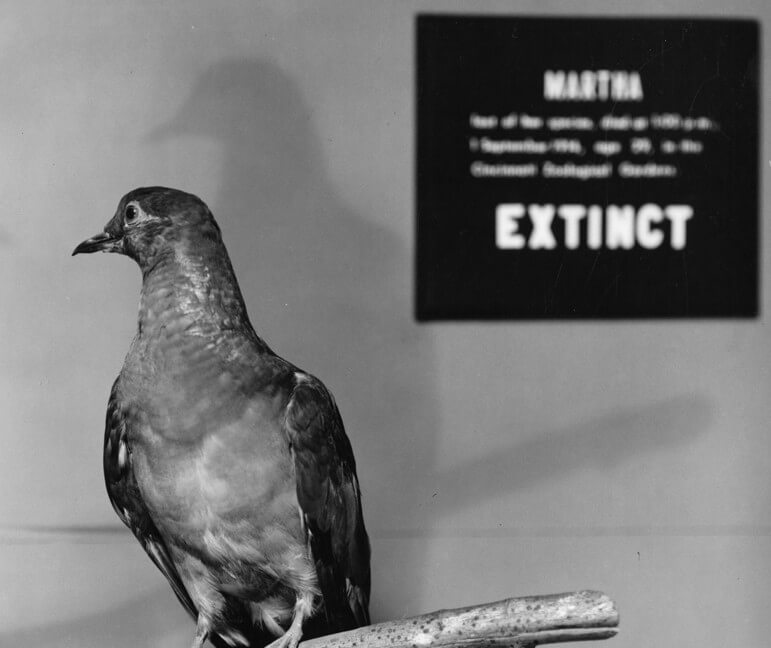 Imagine the chance to stand beneath a sky-darkening cloud of migrating passenger pigeons; to come face-to-face with a mammoth, that icon of the ice-age. For anyone awed or intrigued by creatures lost to time, this is a giddying thought.

The last wild passenger pigeon was shot by a boy with a BB gun in 1900. Now, synthetic biologists led by figureheads like Harvard genetics guru George Church, say they can “revive” the passenger pigeon– they can undo extinction through the process of “de-extinction.”

“De-extinction” had its day in the sun earlier this month, when National Geographic sponsored the day-long “TEDxDeExtinction” talks in Washington, D.C. on March 15.

The how of de-extinction is deceptively simple. If we have viable cells—say, some mammoth muscle—we may be able to trick these cells into becoming stem cells, and get them to divide into an entire embryo. Even if all we find is an intact cell nucleus, we may be able to implant these nuclei into the egg cells of their closest living relatives and get them to create a viable embryo. Considering the mass of mammoth tissues being uncovered as the permafrost melts in our warming world, finding some viable mammoth biomaterial is hardly impossible. It may even be likely.

Even if we can’t get our hands on a preserved cell or nucleus—as is almost definitely the case for the majority of species not gracious enough to have gone extinct in a gigantic freezer—we may still be able to together enough information about an extinct species’ genome to create a complete “map” of its genetic identity. With this, it’s now possible we could tweak an existing species to match this blueprint. This is the truly impressive feat of modern genomics: the idea that our ability to rebuild, read, and manipulate genetics has advanced enough to consider, seriously, the idea of hand-crafting a living, breathing replica of an extinct animal.

All of these scenarios, however, depend on close living relatives to act as surrogates. Biotechnology has not perfected the artificial womb, and the only place to “grow” a mammoth embryo, no matter how we go about getting it, is in the womb of a modern elephant.

The most successful attempt to revive an extinct mammal, a single Pyrean ibex cloned from the last remaining individual of the species was born with an extra lobe of solid tissue the size of on one of its lungs and died within ten minutes of being born. This is to say nothing of the fact that any creature we create this way will be, despite our best efforts, a genetic approximation of the species in question, automatically crippled by an extreme lack of genetic diversity. Conservationists worry about population bottlenecks, when a population becomes so small that much of its genetic diversity—and therefore its adaptability and resilience—is lost forever. Is there any more dramatic bottleneck than complete extinction? But de-extinction, even given the benefit of the doubt, is not all its cracked up to be. It can’t be. Let’s check in on a species that has not gone extinct — a species that is generally considered a conservation success story.

Just as passenger pigeons formed flocks so big as to darken the sky, the American bison formed herds that darkened the great plains of North America. By the end of the 19th century, the bison numbered in the hundreds, down from a population estimated at 30 to 70 million, but it managed to survive—largely thanks to human intervention and its viability as livestock. According to the IUCN Red List of Threatened Species, the total number of mature individuals in wild free-ranging and semi-free-ranging populations is estimated to be approximately 11,250. Although “the species is not currently in decline,” notes the IUCN, “this is a conservation dependent species.”

How meaningless the line between the absolutes of “extinct” and “not extinct” seems to become when one takes into the account the fate of the American bison. Its extremely limited, monitored, mostly economy-driven existence (around 500,000 bison are in captive commercial populations—that’s 50 times as many as are “wild”) is hardly a total reversal of its fate in the 19th century. Instead, we have saved this species and “restored” it only insomuch as it is convenient and practical for us to do so without ceding huge swaths of land to recreate a Great Plains ecosystem that is every bit as diminished as the bison.

Do not misunderstand me: I’m not implying that the current fate of the bison is morally wrong. Rather, the reality simply doesn’t line up with what many of us envision when we think of a conservation success. And it certainly, for me at least, does not match the incredible promise of the phrase “de-extinction” as it has been used by proponents of the idea. To truly undo the effects of extinction one would need to undo whatever caused extinction in the first place.

And here’s the irony: most of the time, it’s us. In particular, whenever someone makes an argument that we have a moral obligation to bring back the passenger pigeon, say, to balance our karmic ledger for having let that boy end the species with a BB, they’re asking that we bring a species back into a world that killed it off in the first place.

This, in turn, highlights what I see as the central irony of conservation (and I say this as someone who would label himself a conservationist): to conserve is to prevent change, yet the state of nature is very much change. Species are always entering and exiting the stage of life; there has never been a point in our planet’s long and mostly human-free history where the “state of nature” was anything like an equilibrium or a balance or any of these idealized, romanticized notions that seem to depend on a presumption that mankind is somehow unnatural.

What makes a given species worthy of conservation efforts? How do we distinguish between human-driven extinction and “natural” extinctions? Does this distinction even matter?

How we resolve this paradox, how we conduct conservation while accepting the reality of constant change and the reality of a human-dominated world, I do not know. This is something the entire environmental movement is only just beginning to grapple with.

What I do know is that “de-extinction” is at best an overly hopeful misnomer and at worst a bit of clever marketing, and that it’s a functional impossibility.

Kenrick Vezina is an editor for the Genetic Literacy Project and a freelance science and nature writer based in the Greater Boston Area.