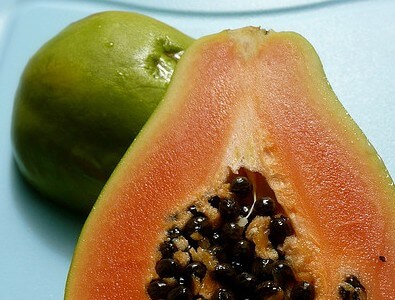 In the 1980s, papaya farmers in Hawaii began detecting the first signs that their papaya crop was facing mortal danger from ringspot virus. By the mid 1990s, the virus had spun out of control. Trees withered, their leaves resembling bird claws. The fruit was pockmarked with ring-shaped infections. The island’s traditional papaya industry was on the verge of collapse.

Today, the industry is thriving. Trees are thick with leaves; the export trade to the mainland and parts of Asia is booming; and almost all of the precious fruit has been genetically engineered to resist the deadly virus.

Until this crisis, most crop biotechnology innovations had focused on cutting costs and increasing yields—adding herbicide resistance to minimize chemical usage or engineering plants to produce their own natural pesticide—the same bacterial insecticide (Bt) widely use by organic farmers.

The looming catastrophe set scientists at the University of Hawaii into action. Led by Dennis Gonsalves, now retired from the United States Department of Agriculture, the Hawaii biotechnology team targeted the virus. Ringspot works by hijacking the papaya’s cellular protein-making machinery to replicate itself. Gonsalves’ engineered papayas, however, have a small stretch of genetic code (RNA) that spurs the plants cells to effectively “silence” any similar viral RNA, rendering intruding ringspot mute. Under federal tight oversight, the researchers launched a small trial of the papaya in Oahu, where ringspot remains rampant—a procedure that would be banned under a bill now being debated in Kauai.

The first virus-resistant papayas were commercially grown in Hawaii in 1999, saving the industry from extinction. The genetically modified papayas are now no longer susceptible to infection by ringspot, allowing farmers to cultivate the fruit even when the virus is widespread. It was a dramatic demonstration of the best that crop biotechnology had to offer. Transgenic papayas now cover more than 2500 acres—three quarters of the total Hawaiian papaya crop.

It’s these papaya plants and other crops grown in Kauai using advanced genetic techniques that are under attack by anti-biotech crusaders, who have petitioned local governments to dramatically restrict the cultivation of genetically modified crops. On June 28, the Kauai County Council unanimously voted to approve a July 31st public hearing on Bill 2491. The measure calls for an unprecedented 500-foot pesticide-free buffer zone around public areas and bodies of water, a temporary moratorium on the experimental use and commercial production of GM crops until the county has conducted an Environmental Impact Statement on the industry’s health and environmental effects, and prohibits open-air testing of “experimental” pesticides and biotech crops. In other words, it would freeze GM technology in Kauai in its tracks, and force a rollback in cultivation.

The Kauai ordinance is designed to restrict even further already tight state and federal laws. The USDA now regulates the introduction of new biotech varieties. Once it approves a GM crop for planting, it is considered a deregulated crop and not experimental. The legislation would, in effect, keep GM crops suspended in what amounts to a permanent “experimental” status—in defiance of the findings and recommendations of every major independent science organization in the world.

The protestors ‘buffer zone strategy’ was hatched by the Center for Food Safety in Washington—a notorious anti-biotech group—and other mainland organizations looking to fan local fears and bypass existing legislation. CFS recruited and coached local Kauai councilmen this past spring after the Hawaii legislature considered and then killed, GM labeling laws, infuriating activists.

“This ordinance is about impacts on Kauai—Kauai health, Kauai environment,” claimed Councilman Gary Hooser. However, Hooser’s actions belie his moderate words; he is an avid anti-biotech campaigner, leading chanting protestors in front of the Hawaii State Capital on opening day of the legislative session earlier this year.

During the late June hearing, Bill Freese, CFS’s “science policy analyst”—he has no undergraduate training in crop science and holds no advanced degrees—trotted out the familiar litany of anti-biotech claims. CFS tried this strategy ten years ago when California was battling over similar proposed laws, targeting Sonoma County. As that debate evolved, it became clear to local residents and legislators that CFS and their local recruits were bending the science, and their efforts failed dramatically in counties that actually grew food.

These outside groups have also advanced an anti-GM bill on the big island of Hawaii, at the center of the Rainbow papaya industry, which is run by local farmers. There are no biotech companies currently on the big island; the proposed law is designed to keep them out.

The legislation would also drastically impact the vibrant ranching community on the big island, which prompted a recent rally by local farmers and ranchers in opposition to anti-GM legislation. They warned that the bill would prevent farmers from benefiting from modified crops that are resistant to diseases.

“Frankly, I’m sick and tired of having to defend my life’s work,” said Jason Moniz, representing the Hamakua Farm Bureau. Such a bill would have prevented farmers from adopting the transgenic Rainbow papaya in the late 1990s, bill opponents said.

The protestors have unified around the paranoid belief that the federal and state governments are engaged in a coordinated conspiracy against the public. Professional surfer and mixed martial arts fighter Dustin Barca, a lead figure with Ohana O Kauai, a local anti-biotech group, testified that that there is “big corruption in the government right now with the biotech industry.”

“Who can we trust in our government?” he told the Council, insinuating that Michael Taylor, Deputy Commissioner for Foods at the FDA—widely considered one of the most thoughtful minded public officials on biotech issues—and SCOTUS justice Clarence Thomas, are biotech lackeys, pulling the strings in Hawaii.

“Five hundred to 1,000 jobs isn’t worth the health of 30,000 other people,” Barca said. “And you know, I feel like it’s time to put human health over corporate wealth.”

Although its supporters promote the bill as a “right to know” initiative, its critics see a Trojan horse. Scientists and farmers believe it is a direct assault on both science and commerce. Industry practices on Kauai and around the state are no different than what’s being done on the mainland, in island regions like Puerto Rico and across the world.

“This bill would create confusion and inconsistencies, where a few, but not all, farming operations would be expected to follow another set of rules and guidelines that conflict with requirements that are actually specified now on the labels of those products,” said Cindy Goldstein, a spokeswoman for DuPont Pioneer, at the recent hearing.

Pro-biotech supporters—locals employed by the industry and independent farmers—presented reams of peer reviewed studies, including a list of 125 independently funded reviews, on the safety and health of the GM crops in question.

The bill as formulated clearly violates several long established “right to operate” and “right to farm” laws and would no doubt bring about costly litigation to burden taxpayers. It’s estimated that the new law in Kauai would, if passed, result in farmers using biotech seeds losing as much as 90% of their lands currently under cultivation.

Gonsalves, who is now retired from the USDA’s Pacific Basin Agricultural Research Center, is frustrated by the ongoing protests. Their actions, he has said, not only endangers the papaya crop, it strangles a technology that could save other struggling fruit and grains

Gonsalves’ work “is a model for what should have happened [everywhere],” Roger Beachy, former director of USDA’s National Institute of Food and Agriculture and one of the scientists who, in the 1980s, pioneered virus-resistance technology, he said. “He just plain stuck to it because the farming industry needed it.”

In 2010, the National Academy of Sciences, the country’s premier scientific advisory body, cited the lack of biotech work on specialty crops as one of farming’s most pressing problems. Basic science is not enough, it wrote. Researchers and farm-focused universities need to see these plants through to commercialization—which is exactly what the Kauai legislation is determined to choke off.

“Hawaii is ideally suited for field trials and seed production, because of the climate and the ability to grow corn and soybeans 52 weeks a year,” said a spokesperson for Johnston, Ia.–based Pioneer Hi-Bred International. The DuPont subsidiary has been producing GM corn and soybeans in Hawaii since the mid-1990, when the Food and Drug Administration approved the crops for commercial sale and has been on Kauai since 1968 with its winter research and parent seed operations.

Hawaii’s unique ecosystem—a year round average of 75 degrees Fahrenheit and its open acreage—make it a haven for farmers. Thanks to Hawaii’s temperate climate, seed companies can harvest three to four yields of some crops per year compared with only one-two yields in the mainland. The switch to genetically engineered crops has not only rescued the blighted papaya from oblivion, it’s turned the state into a farmer’s cornucopia, say island scientists.

“It is important to understand that genetically modified plants are among the most highly studied foods that humans eat,” notes Karl Haro von Mogel, a plant scientist at the University of Wisconsin and founder of Biology Fortified, an independent website frequented by top scientists committed to agricultural sustainability. “Genetic engineering does not introduce any new classes of risk that are not already present with traditional plant breeding. In sum, there is no reason to think that living near field trials of experimental genetically modified plants poses any additional risk to the residents of Kaua’i, and indeed, there are benefits to the local farming economy from such trials.”

But you won’t hear that science-based perspective from the swat team of Washington, DC-based activists who appear determined to turn Hawaii—Kauai in particular—into Ground Zero for the anti-crop biotechnology movement.