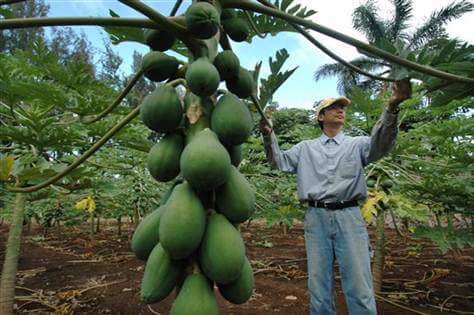 Scientists, academics and activists gathered at the Hawaii County Council on Monday to discuss the controversial GMO bills that would severely limit or outright ban the cultivation of GM crops on the Big Island.

The council heard from University of Hawaii scientists, including the Dennis Gonsalves, creator of the GM rainbow papaya, which many argue saved Hawaii’s papaya industry, and Michael Shintaku, a professor of plant pathology, who spoke about the relative safety of glyphosate, the active ingredient of Roundup herbicide.

In an embarrassing move, Councilwoman Brenda Ford, whose Bill 109 would ban all GM crops outright, had former yoga instructor and anti-GMO crusader Jeffrey Smith Skyped in to the meeting to give his testimony. Smith’s two self published books and prominently anti-GMO documentaries remain central to the anti-GMO movement despite having been repeatedly called into question by the scientific community. Among the other anti-GMO voices were a naturopathy practitioner and a gynecologist who referred to herself as a “mermaid against GMOs.”

Also in attendance was Kauai councilman Gary Hooser who has introduced Bill 2491, which if passed would place severe limitations on the use of GMOs and pesticides on Kauai.

After eight hours of discussion, the council adjourned until October 1st, keeping these bills alive at least another week.

Watch a segment of the discussion: