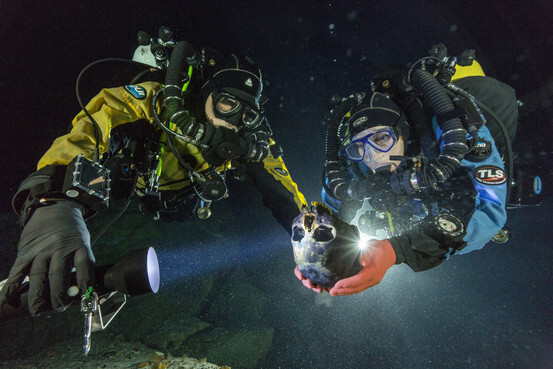 In a Mexican cave, more than 40 meters below sea level, scuba divers discovered the skeletal remains of a teenage girl who died at the bottom of the cavern 12,000 years ago. She was surrounded by remains of sabertooths, ancient sloths, pumas, bobcats and coyotes. In addition to being the oldest known intact skeleton, she is also genetically intact, offering proof that the girl, called Naia by the researchers, is the oldest known relative of modern Native Americans.

Geneticsts analyzed Naia’s mitochondrial DNA, which is passed down only from mothers to their children. Naia matched types D and D1, the same groups that are found today in native people throughout North and South America. Penn State’s James Chatters and his colleagues, who published their study in the May 16 issue of Science, say this genetic evidence concludes that early hunter gatherers like Naia are the original group of inhabitants of the continent and ancestors of current native populations.

Anthropologists have long believed that Naia and her ilk migrated across the Bering Strait and into the Americans from their Asian origins. But as Robert Lee Hotz at the Wall Street Journal explains, there are competing theories:

Other theories have held that the earliest settlers may have come from the South Pacific by boat or paddled across the Atlantic from Spain… The debates aren’t likely to abate. Archaeologist Dennis Stanford, director of the Paleo-Indian program at the Smithsonian National Museum of Natural History, said the early settlers identified in the new study likely only inhabited western North America, leaving open the question of who settled the rest of the continent. “There is something totally different going on the East Coast than on the West Coast,” Dr. Stanford said.

One issue that spurs the controversy is differences in the shape of key facial structures between Naia and modern Native Americans including her incisors, molars and cheekbones. Some scientists see these charactieristics as evidence that the new remains and modern native peoples evolved from different ancestral origins.

But, geneticist and blogger Razib Kahn points out that these differences in morphology are common between groups who we know are related. He points to the Japanese Ainu who were different enough that some considered them related to Europeans. But blood type data refuted that. The fact that Naia and modern Native Americans look different could simply be a matter of evolution, Kahn writes:

Morphological patterns are obviously informative. But one reason that they’re interesting is that they vary between populations, and that variation suggests a certain level of evolutionary pliability. One of the ironies of traits which we use to differentiate populations, such as skin color and facial features, is that these might actually have relatively shallow time depth within a given lineage.

Whether or not Naia’s genetics can definitively settle the issue, she illustrates the exciting developments arising from the application of sequencing technologies to the study of anthropology.