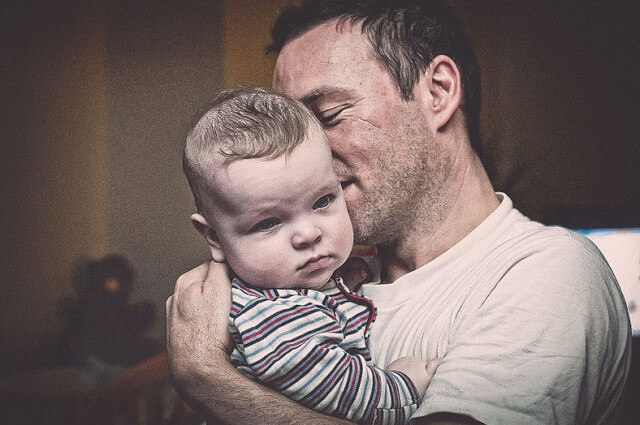 The title of Paul Raeburn’s new book is a rhetorical question: Do Fathers Matter? Raeburn is an accomplished science writer, and the book (just published by Scientific American/Farrar, Straus and Giroux) is an up-to-date account of what recent research has discovered about fatherhood.

It shows, of course, that fathers matter very much.

One of the book’s several strengths is Raeburn’s campaign for much more attention to the risks older fathers may visit upon their late-life children. Those risks are largely genetic and not widely known, so I’m concentrating on that topic here at GLP. (Full disclosure: Science writing is quite a small world, so Raeburn and I are longtime colleagues.)

Everybody knows that older mothers run higher risks of a baby with birth defects–Down syndrome being the most common and best-known. By comparison, hardly anybody knows that the older Dad gets, the riskier it is for him to conceive a child.

The list of alarming possibilities Raeburn cites include “bipolar disorder, birth defects, cleft lip and palate, water on the brain, dwarfism, miscarriage, premature birth, and ‘decreased intellectual capacity.'” Especially noteworthy are the increased risks for psychiatric disease such as autism and schizophrenia.

One impetus for Raeburn’s book was very personal. He got his first inkling of the bad news about paternal age effects from a TV news story about the increased incidence of autism in children of older fathers. The timing was terrible. That’s because Raeburn was watching the news in a hospital room with his exhausted wife, who had just given birth to their first son. This is his second marriage and his second family. He was 55.

The genetics of schizophrenia

The idea that the nightmare of schizophrenia is a biological disease with biological causes rather than a psychogenic one was a long time coming, not widely accepted until quite late in the last century. My heart bleeds for the thousands of blameless women who took undeserved guilt upon themselves by accepting without question the once-fashionable scientific notion that they were “schizophrenogenic” mothers who had created their own disturbed children through their coldness and bad mothering. Sometimes it’s not so hard to understand why people are suspicious of science.

Today, in our wisdom, we know that mutant genes are a big part of the schizophrenia story, although as yet the wisdom doesn’t extend to having much of a clue about which genes. In science’s defense, I note that it’s clearly very complicated. Raeburn tells us that epigenetic factors may be involved too.

These newer ideas could still cause intense parental guilt about passing bad genes along to the kids. Except that, as it turns out, while schizophrenia appears to be mostly a genetic disease, it is usually not an inherited disease. Something I learned from Raeburn’s book is that, in four out of five cases of schizophrenia, there’s no family history. This ghastly brain disease just pops up, seemingly out of nowhere.

In some unknown but significant proportion of schizophrenia cases and other medical conditions bequeathed by older fathers, the explanation for devastating mutant genes seems to lie in the father’s sperm. Not in the genes that sperm start out with, but in what happens to those genes during sperm-cell division. Cell division is a tricky and complex business, and it’s some kind of miracle that so often it goes right when so much could go wrong.

By contrast with a woman’s eggs, which are present in her body even before she is born, men’s sperm are being created constantly from cells that have divided and divided over and over again. This provides many more opportunities for gene copying to go wrong. And so, sometimes, it does.

Sperm cells undergo 20 to 30 divisions per year — approximately 600 divisions by the time a man is 40, according to Brain D’Onofrio and Paul Lichtenstein.

“Each cell division brings the possibility of new mutations. Recent studies suggest that there are approximately two new mutations each year, and there is an exponential increase where mutations double every 16.5 years.” D’Onofrio and Lichtenstein conducted a massive study of all people born in Sweden from 1973 through 2001, one of the studies that established a link between a father’s advanced age and his child’s vulnerability to psychiatric problems. They described this and other such research in a detailed recent post at Cerebrum, the Dana Foundation’s Web-based magazine.

Older fathers, let me hasten to point out, can be a very good thing for kids.

As for the scary stuff, while the risks to children for some disorders may be somewhat higher with older fathers than with young ones, the risks are still pretty low. D’Oniofrio and Lichtenstein point out that in their huge study less than 3 percent of the children had psychiatric problems. That means more than 97 percent of them did not.

And Raeburn points out that old dads appear to also confer genetic advantages on their kids. The data suggest that the children tend to be taller and slimmer than kids of younger fathers. There are also indirect—and unconfirmed—indications that such children may even be genetically predisposed to live longer. Time, presumably, will tell.

Raeburn wants to spread the word about the potential risks of older fatherhood. There is, however, a certain reluctance to do that among medical professionals. And there’s a reason for that reluctance: there’s not a damn thing older men contemplating late parenthood can do to prevent bad procreative outcomes associated with advanced paternal age. When genetic causes for these conditions have been identified, perhaps prenatal diagnosis will be available. Eventually.

As for the young Raeburn boys—there are now two of them—so far, so good. They are free of the birth defects that turn up in childhood, like autism. But Raeburn is clear-eyed about the fact that while he and his wife have put their worries about early childhood problems behind them, more worries lie ahead. Schizophrenia typically doesn’t manifest itself until adolescence.