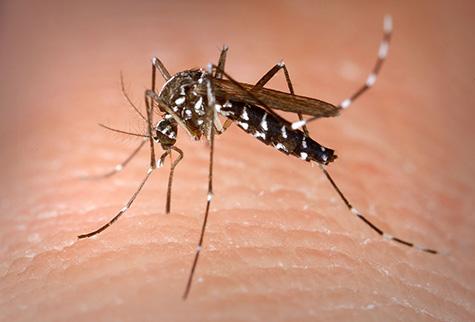 The Asian tiger mosquito (Aedes albopictus) is native to Southeast Asia, is an alarming vector for human disease like dengue, chikungunya and yellow fever, and such an aggressive daytime biter it is called a ‘flying syringe’ by immunology experts.

In was first spotted in the United States in 1985. How did it happen and how was it spread? To find out, researchers writing in Molecular Ecology turned to the new discipline of landscape genetics. Correlating genetic patterns with landscape patterns, they concluded that the mosquito traveled by human-aided “jump” dispersal followed by slower regional spread. It first arrived in the US in a shipment of used tires from Japan. Ae. albopictus lays eggs that can survive even if any water evaporates, so they’re very easy to transport.

And disease experts are concerned. So far this year the state of Florida has reported 11 cases of locally transmitted chickungunya, a disease original to Africa that wasn’t seen in the Americas until 2013. Environmentalists simultaneously oppose pesticides and genetic modification of mosquitoes to stop them so the only recourse left is to keep them contained.

The jumps in locations occurred when mosquitoes hitched a ride in cars or trucks, traveling on highways. An adult flies less than a kilometer in its lifetime.

“Even Darwin, in the 1800s, was interested in how species travel from point A to point B,” said Kim Medley, PhD, interim director of the Tyson Research Center at Washington University in St. Louis.. “But measuring dispersal rates by hand is nearly impossible,” she said. “I’ve tried it. You can dust mosquitoes and release them and then try to recapture them, but capturing enough of the releases to reach any solid conclusion is really difficult.”

So to figure out how Ae. albopictus spread from the tire pile in Houston, the scientists used a technique that relies on high-tech tools such as genotyping and GIS. First introduced by French scientists in 2003, landscape genetics provides a way to rigorously test competing hypotheses for dispersal.

As a first step they had to establish the genetic structure of the U.S. Ae. albopictus population. A container mosquito, Ae. albopictus lays its eggs just above the waterline in old tires, flower pot saucers, water bowls, bird baths—and cemetery flower vases.

To sample the mosquito population the scientists collected larvae from abandoned flower vases in cemeteries both on the edge and within the core of the mosquitoes’ U.S. range in both rural and urban areas.

“The green cylinders with the spike on the bottom are the best for collecting immature stages of mosquitoes,” Medley said.

The immature mosquitoes were raised to adults in the laboratory so the species could be accurately identified (there are 174 recognized species in the U.S.) and then the DNA was extracted from clipped legs and typed at nine different microsatellite locations.

The scientists then compared the genetic structure of the mosquito population to that predicted by 52 different models of mosquito dispersal that variously took into consideration habitat and highways.

Gene flow over long distances was correlated with highways and bodies of water. People had carried mosquitoes from the core of their range to its edge along highways, likely by semi-trailers or in cars. Wetlands and lakes were important, not because they are breeding sites, but because they tend to occur in areas where frequent rainfall refills artificial containers and supports mosquito growth.

The scientists also looked more closely at what was happening at the range edge. Because Ae. albopictus lays eggs in treeholes and is often found resting at forest edges, they expected forests at the northern edge of the mosquitoes’ range to act as natural corridors for dispersal.

It turned out forests were barriers rather than corridors, perhaps because Ae. albopictus had not been able to displace the native treehole mosquito, Ae. triseriatus.

The forest finding is an interesting example of the ability of landscape genetics to test assumptions. Understanding mosquito dispersal is important because the mosquito’s genes go where it goes. Human-aided gene flow between mosquito populations can give a species the smorgasbord of genetic options it needs to rapidly adapt to novel conditions, Medley said.

Since it is in the U.S. and probably to stay, how can you stay safe? Avoid those small pots of “lucky bamboo” sold on Amazon, eBay, and at Target, Home Depot, Walmart, Walgreens and other retail outlets.