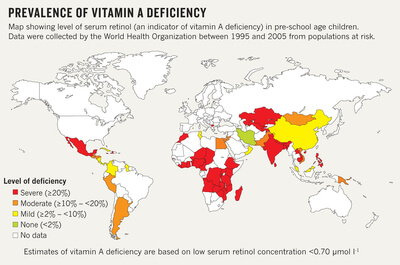 In south and southeast Asian nations such as India, Bangladesh, Indonesia and the Philippines, rice is the primary food source, comprising up to 70% of the daily caloric intake. As many as a half million children, mostly in Asia, lose their eyesight because of vitamin A deficiency. Half of them will die within a year of going blind, primarily because their immune systems did not have enough vitamin A to function properly.

It was that humanitarian crisis–and the failure of alternative potential solutions to the crisis promoted by biotechnology critics–that led to the Golden Rice project. Golden Rice is genetically designed to produce β-carotene—a precursor to vitamin A. Despite the fact that the modified rice is considered an ideal solution to the problem, its development remains stalled for both political and technical reasons, according to a comprehensive history of the innovation in the current issue of Nature.

Several technical problems have dogged golden rice’s journey from the greenhouse to the field. Unfortunately, the golden rice strain selected for field testing does not grow as well as local rice varieties, limiting its appeal to struggling farmers.

The scientific problems can be solved, but public fears over GM organisms (GMOs) may be a bigger obstacle. Activists in Europe and North America have shaped the debate by raising doubts and concerns over the environmental impact and health risks of ‘unnatural’ GMOs, even though scientists have pointed to numerous studies that should assuage these worries.

Greenpeace scientist Janet Cotter thinks it is too early to make assertions about the safety of golden rice. “You may very well be able to create β-carotene in rice, but then the question is, what else has changed?” she says. “There’s no way you can test every single compound in a plant, and you still won’t know about the food safety in terms of the wider population.” But proponents of golden rice see this as an unnecessary objection to a promising solution to malnutrition. “We cannot ever say the risk from GM crops is zero,” says Ronald Herring, a political scientist specializing in biotechnology policy at Cornell University in New York. “But I don’t know of any actually authenticated hazard, and I think the science all points in the same direction.”