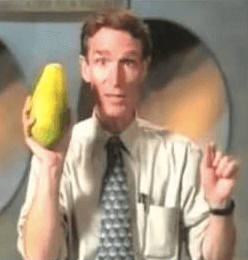 Some of you might recall the open letter from Kevin Folta, a University of Florida plant scientist, inviting [“The Science Guy,” Bill ]Nye to participate in “a forum at a major university for a civil, evidence-based debate on the benefits and risks of agricultural biotechnology.”

The Science Guy never responded. [H]e has received another invitation to discuss his opinion about GMOs. It comes from three graduate students who have just shared their letter with me (also supplied by Kevin Folta to the GLP):

We are graduate students at Purdue University studying plant physiology, biochemistry, and human nutrition and collectively have different views on the use and implementation of genetically modified crops. Being at a major land grant institution and surrounded by agriculture in every way, we recognize that farmers, who are stewards of their land and environment, are choosing to plant genetically modified crops because it is financially beneficially for them to do so. These crops offer benefits that save farmers valuable time and facilitate more consistent yields.

Recently, Mr. Bill Nye made unsupported comments about genetically modified crops that alarmed us. As students who are concerned about the impacts of farming on the environment, we were surprised that Mr. Nye’s comments were made without substantiation from peer-reviewed research. Dr. Folta, a professor and department chair of the University of Florida’s Horticulture Department, has a long standing reputation of echoing the scientific consensus on the safety of genetically modified crops and seems to hold views that are perpendicular to Mr. Nye’s.

Mr. Nye has publicly pursued climate change and science deniers through debates and open forums in the past. Most famously, Mr. Nye formally debated Ken Ham in a public setting and demonstrated that belief-based arguments have no validity. It seems fair that Mr. Nye be given the opportunity to support the assertions that he made, but using the support of rigorous, peer-reviewed science that closely adheres to the scientific method that he has championed throughout his career.

As scientists, our fundamental mission is to better understand reality through the scientific method and logical reasoning. As such, we are offering to host a debate between both of you here at Purdue University. This is neutral ground and would be of great relevance to our mission as a university, to the farmers of our region, and to the students in our programs. We are willing to arrange a venue and provide moderation in a debate like those both of you have participated in previously and can be flexible to accommodate both of your busy schedules.

Agricultural biotechnology and environmental stewardship are of great interest to all of the students studying agriculture in various contexts.  A frank discussion between two scientists with apparently contrasting views on the benefits and risks of this technology will be of wide interest and stimulate thoughtful discussion throughout the scientific community and the public.

If the Purdue grad students receive the courtesy of a reply, the GLP will let everyone know, as of course will Keith Kloor or hatched the idea. As of now: defining silence. Stay tuned.