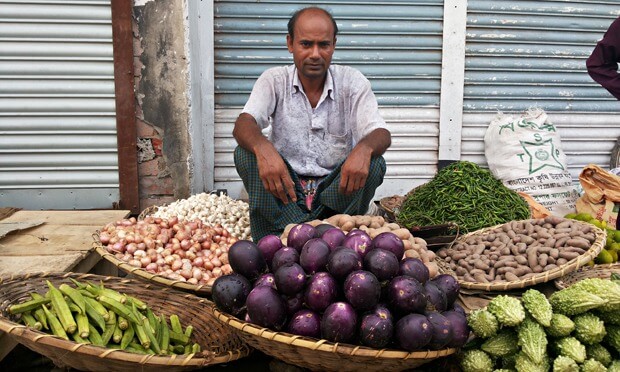 “Bt Brinjal Fails Two Years Running Risks Spreading Disease,” ran the headline story in a blog post on the Institute of Science in Society, an activist site that campaigns against agricultural biotechnology. Within minutes of its posting, the “article” appeared as a headline “story” on dozens of anti-GMO websites around the world, and even picked up by some mainstream sources.

The piece was written by Institute of Science in Society (ISIS) founder Mae-Wan Ho, a geneticist known for her quirky views—she rejects traditional Darwinian evolution and is convinced that genetic engineering is a ‘dangerous experiment’ that is doomed to failure and will cause serious ecological disaster.

That darkening reality, Ho argues, is unfolding today, in Bangladesh.

“Bt brinjal varieties planted all over the country die from disease prematurely or fail to fruit, and fail to protect against target pest,” she writes. “A moratorium must now be imposed as a matter of utmost urgency to prevent the spread of new disease to indigenous varieties.”

Bt brinjal is a transgenic eggplant with a natural protein gene inserted that naturally repels or kills many pests. The protein is found naturally in the soil bacterium Bacillus thuringiensis, which has been sprayed on organic crops for more than a century because of its effectiveness and harmlessness to humans and other crops. Bt brinjal is genetically inoculated to resist the endemic pest called fruit and shoot borer, and therefore requires drastically less pesticides than is conventionally applied by farmers.

Ho’s piece is based on a Bangladeshi news agency (UNB) report from about a month ago published in several activist style newspapers that have run sharply critical stories about Bt brinjal.

“The cultivation of genetically engineered Bt Brinjal in the country’s several districts has cost the farmers their fortunes again this year,” claimed the unsigned article in New Age, which bills itself as “The Outspoken Daily.” The article painted a picture of widespread devastation caused by bacterial wilt, which the article, and Ho, try to suggest is a ‘new disease” that’s been introduced or encouraged by Bt brinjal.

This story and a slew of others in New Age and from similar anti-GMO publications contrast sharply with reports from independent agencies and journalists in Bangladesh. That raises increasing concerns of whether anti-GMO activists based in Dhaka—many funded by advocacy groups in Europe—have succeeded in cultivating relationships with local journalists, creating a sharp  ideological bias against all biotech crops among some impressionable reporters.

Ho has been beating the fear drum for years on this crop. “Don’s Grow BT Brinjal,” she posted on ISIS in 2013, claiming it presents “an enormous hazard to human health”—a totally bogus claim. Immediately after its introduction, and immediate success, she posted blogs trying to claim the opposite of what independent field researchers found. “Bangladeshi Bt Brinjal Pilot Scheme Failed,” she wrote in July 2014. Ho maintains that Br brinjal threatens “indigenous” brinjal varieties—in fact the Bt varieties were developed from native eggplants.

“The stakes are admittedly high here,” wrote Mark Lynas while touring brinjal farms outside of Dhaka last summer, arriving in Bangladesh to check out if there was any substance to Ho’s alarmist article. Lynas is, a journalist, formerly critical of GM technology, who is now affiliated with Cornell University. These claims, he told me recently, have shown up like clock work every six months ago for the past few years.

“This is South Asia’s first GMO food crop, and has been developed in the public sector for distribution to resource-poor smallholder farmers. The powerful anti-GMO lobby knows that if Bangladeshi farmers successfully adopt this new crop, other GMO crops in the pipeline such as Golden Rice (also being developed in Bangladesh) will be advantaged and their cause of banning the technology permanently will be harmed.”

On the ground in Bangladesh

What’s the actual situation on the ground?

Following the publication of the original UNB article, scientists working with the Bangladesh Agricultural Research Institute (BARI), the government-run agency that developed and owns Bt brinjal in Bangladesh, visited all of the fields mentioned. Fifteen plots were visited in Manikganj, Narsinghdi and Comilla, the districts mentioned in the report. Two of the 15 plots had suffered extensive damage, with over 75% of the crop lost to bacterial wilt. Three more had 10-45% damage. The remaining 10 were in good condition. There is no pending disaster. A rejoinder by BARI published in the independent New Nation newspaper in Bangladesh details the precise conditions and harvest figures for all the fields in the region, and condemns the UNB report as “totally partial and worthless”. 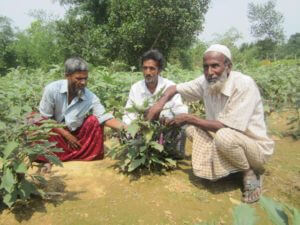 Overall in Bangladesh 108 farmers are currently growing Bt brinjal seeds provided by BARI. According to the latest provisional performance information, nationally only 8% of the farms have suffered severe loss from bacterial wilt—a lower number than might be expected in an average year. The rest of the farms have seen good fruiting and farmers have enjoyed big productivity increases and been able to sell fruits in local markets. Data is being collected by BARI on a constant basis and will be made available in final form in July. There is ongoing heavy demand from conventional brinjal farmers for access to the new Bt brinjal varieties.

Has the Bt trait failed?

Investigators found no support for claims by Ho and repeated in some articles that the Bt trait has “failed” and the brinjal has been attacked by fruit and shoot borer. None of the project experts have ever found evidence of FSB infestation on a Bt plant. Most likely this confusion arises because journalists confuse the control refuge non-Bt brinjal plants that are grown around the edges of all the Bt crops as a resistance management strategy to ensure that FSB does not rapidly evolve resistance to the insecticidal Bt protein. Most non-Bt controls will indeed be infested with FSB and show damage to both fruits and shoots as a result. The untrained eye—or a reporter with an anti-GMO bias— would not be able to tell the difference between the varieties.

The aim of the Bt trait is to enable farmers to dramatically reduce their pesticide sprays, because FSB is controlled directly. All Bt brinjal farmers have reported drastic reductions in pesticide application, often down to zero. Conventional brinjal is typically sprayed 80-100 times during the growing season, and sometimes multiple times a day, to control FSB infestations, which otherwise make the fruit unmarketable. Reducing pesticide saves farmers money, and removes a serious danger to the health of farmers—who typically spray with backpack sprayers and bare feet, wearing no facial protection against inhalation. 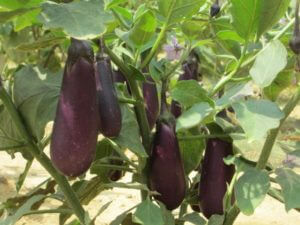 The use of Bt brinjal also eliminates pesticide residues on the fruit that is sold. Bt brinjal is typically labeled in markets as: ‘Bt brinjal—pesticide-free’ and can even command a small price premium from buyers. The dramatic growth in production and sales of Bt brinjal poses a definite threat to the sales of pesticide companies. The rise of the ‘pest free’ market has grown so quickly that Bangladesh Agriculture Minister Matia Chowdhury has suggested that pesticide manufacturers are covertly backing anti-GMO activists in Bangladesh. Some farmers have also reported that pesticide companies and anti-GMO activists have been collaborating to spread health fears about Bt brinjal among consumers.

Dr. Frank Shotkoski, director of USAID’s ABSPII program under which Bt brinjal in Bangladesh is supported, has also visited numerous farmers in Bangladesh this season to assess the situation first-hand. He said:

We’ve worked hard to support BARI in developing and commercializing a superior agriculture product that will provide considerable benefits to Bangladeshi farmers, especially the most resource poor farmers. All the fields that I visited were in excellent condition producing an abundance of insect-free and mostly pesticide-free brinjal.  I’m happy that Bangladesh has taken this bold step to help insure food security for its citizens. 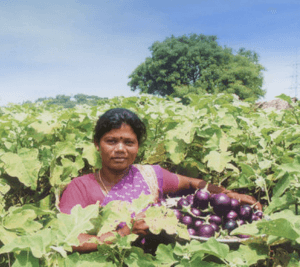 Using similar demonizing tactics, anti-GMO campaigners have managed to block Bt brinjal from getting out to farmers in both neighboring India and the Philippines. Its revival there is linked closely to whether Bt brinjal can withstand activist attempts to frame it as a failure. Bt brinjal is rapidly being embraced by some of the most resource-poor farmers in the world, which poses a direct and serious challenge to the anti-GMO narrative. Hence activists are desperate to construct a failure narrative copied from their playbook in India, where it relentlessly tries to paint Bt cotton as a failure, despite its huge success for farmers overall. Close to 8 million farmers have adopted Bt cotton in the decade since it was introduced, moving from zero to close to 90 percent of the market, resulting in a drastic reduction in pesticide use.

Bt brinjal also challenges anti-GMO campaigners by upending many of their key talking points. It reduces or even eliminates pesticide use. It is being distributed free to farmers, with the Bt gene donated by Monsanto. The plants are open-pollinated, and farmers can and are saving seed. It is increasing incomes for some of the most resource-poor farmers on the planet. It is being grown on very small-scale plots and tended entirely by hand.

So what about Dr. Ho, who remains so critical of Bt brinjal, and biotechnology in general? The Institute of Science in Society sounds like an established and respected NGO. In fact, it is her self-creation—a fringe outfit even by the standards of the diminished UK anti-GMO scene. It is a vehicle for Mae-Wan Ho’s increasingly bizarre beliefs, which include promoting anti-vaccine theories, scare stories about the dangers of Wi-Fi and electromagnetism, AIDS denialism and support for homeopathy. Her anti-GMO views fit quite well with her established platform.