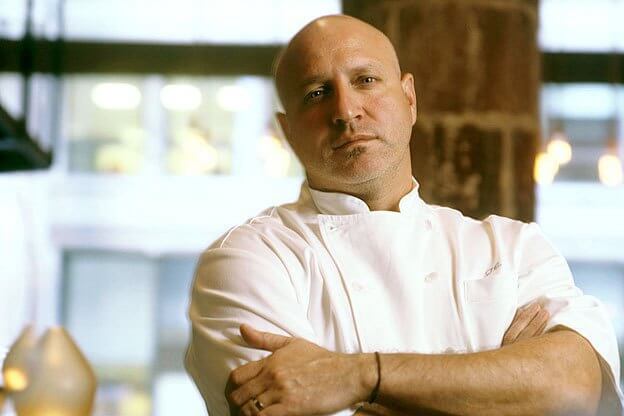 I’ve had it with celebrities opining on subjects about which they have strong feelings but no expertise. Examples include Kevin Costner testifying about the BP Deepwater Horizon oil spill before a congressional committee and Meryl Streep’s uninformed public opposition to agriculturally important pesticides.

I’m also sick and tired of the anti-genetic engineering vendetta at the New York Times that has corrupted its editorials, op-eds and news columns for decades. Within just the past six months, these have included “the most imbecilic and pretentious commentary ever written about genetic engineering” by Mark Spitznagel and Nassim Taleb; an unbalanced, uninformative “Room for Debate” discussion; and an ideological, biased unsigned editorial.

So when these two of my pet peeves coalesced last week, I thought my head would explode.

The occasion was a Times op-ed by celebrity chef Tom Colicchio that was rife with factual errors and bias. Even given the Times’ long-standing baseless antagonism toward genetic engineering, it’s hard to believe they would publish something worthy of a middle school kid zoned out on marijuana–organic and locally sourced, of course. (Their fact-checkers must have been sampling the weed as well.)

Like the Times’ recent Room for Debate discussion and the editorial, Colicchio’s diatribe was primarily directed at the FDA’s decision not to require a “genetically modified” label on a recently-approved Atlantic salmon called “AquAdvantage,” which reaches maturity almost twice as fast as its unmodified siblings. For good measure, he threw in a few swipes at genetic engineering in general.

Consider the following illustrations of Colicchio in la-la land:

This “super” salmon was conceived by combining genes from Chinook salmon that produce extra growth hormone with an “antifreeze” gene from a bottom-feeder, the non-Kosher ocean pout. The result is a fish that grows far faster and larger than non-engineered salmon.

The AquAdvantage salmon contains a growth hormone gene from Chinook salmon and a regulatory sequence of DNA from the ocean pout that serves enables the new gene to produce salmon growth hormone year-round instead of just seasonally. (Neither of these has even the remotest connection to “anti-freeze.”)

“The FDA insists the transgenic fish is safe for humans, but many experts believe they have yet to prove AquAdvantage will be safe for the environment or other fish. Factory fish farms depend on the use of antibiotics and pesticides to control disease and parasites that flourish in high-density environments. The waste they release can decimate other marine life and contaminate the water supply. Farmed fish often escape into larger waters, endangering native species. While these new salmon will be sterile, mistakes can happen.”

Colicchio obviously knows nothing about the AquAdvantage salmon, and his anonymous “many experts” ploy–a pathetic example of the “appeal to authority” fallacy–is unpersuasive. All of the farmed fish will be sterile females, which will only be raised in land-based facilities using recirculating aquaculture systems that recycle 95% or more of the water in which the fish are grown. Waste products are filtered out of the water (and the solids can be used by land farmers as fertilizer or soil amendments). The salmon eggs are produced in the company’s certified disease-free hatchery, so there is no need for antibiotics or pesticides because the fish are not exposed to pathogens or parasites found in the natural environment outside of the farming facility.

Escapes from land-based recirculating aquaculture system facilities are extremely unlikely because of the many fail-safe measures: physical barriers in the piping of the facility–tanks, screens and filters in the pipes, pump impellers that would mince the fish, and chlorination of water leaving the facility. Farming facilities have strict security measures and the perimeter has chain-link fencing. These are farmed salmon, not Navy SEALS.

Finally, even if a “mistake happens”–that is, if the fish were somehow to be transported to and released into the ocean–they would not survive because they are maladapted to conditions outside the farm.

Colicchio seems oblivious as well to the critical issue of sustainability.The AquAdvantage salmon is an Atlantic salmon, which in the wild are “highly endangered,” according to NOAA fisheries biologist Rory Saunders. Over-fishing is the primary reason, and the availability of efficiently-produced farmed Atlantic salmon can relieve much of the pressure on wild populations.

GMO advocates like to label anyone who objects ‘anti-science’.

I can’t judge whether or not Colicchio, who must have been at Home Ec when the other kids were in science class, is genuinely anti-science, but he is certainly woefully ignorant and apparently uneducable–not only about science but also about agriculture.

There really is no such thing as a “GMO,” or “genetically modified organism”; these are meaningless, invented terms convenient for activists to demonize. They don’t denote actual products, or “things”; they refer to the use of an arbitrarily selected group of techniques or processes—and superior ones, at that.

Genetic modification by means of selection and hybridization has been with us for millennia, and the techniques employed along the way are part of a seamless continuum. Breeders routinely use radiation or chemical mutagens on seeds to scramble a plant’s DNA to generate new traits (e.g., Rio Star grapefruit and Calrose 76 rice), and more than a half-century of“wide cross” hybridizations, which involve the movement of large numbers of genes from one species or one genus to another, have given rise to plants that cannot and do not exist in nature; they include the varieties of corn, oats, pumpkin, wheat, rice, tomatoes and potatoes that we buy routinely. In fact, with the exception of wild berries, wild game, wild mushrooms, and most fish and shellfish, everything in American diets is derived from organisms that have been genetically improved in some way. (Yes, even at your restaurants, Tom.)

The use of GMOs has led to unintended consequences. For instance, most GMO crops are engineered to withstand blasts of a powerful weed killer that the World Health Organization has decided probably causes cancer.

The molecular techniques for genetic modification are an extension, or refinement, of those used for decades or even centuries. The modifications are far more precise and predictable (and also more sustainable and benign to the natural environment) than those described in the point above, so “unintended consequences” are far less likely with the modern molecular techniques of genetic engineering. There have been some unintended consequences with the older, pre-molecular techniques for genetic improvement—such as a new potato variety with high levels of a toxin and inadvertent susceptibility of new corn varieties to a fungal infestation—but not with the more precise newer techniques.

The “powerful weed killer” that Colicchio referred to is glyphosate, one of the most benign and biodegradable herbicides. As to his assertion that it “probably causes cancer,” once again Colicchio simply doesn’t understand the science. The data (and a selected set of data, at that) were reviewed to determine whether glyphosate is capable of causing cancer—but without any consideration of likely exposure levels. As is the case with common chemicals like salt and water, and foods like nutmeg and licorice, glyphosate at very high doses is capable of causing harm to humans. However, that analysis ignored one of the seminal tenets of toxicology–“the dose makes the poison”–and the reality is that glyphosate is not a human health risk even at levels of exposure that are more than 100 times higher than the amounts that humans are exposed to, under conditions consistent with the product’s labeling.(Cooking tip for Tom: Go easy on the nutmeg and licorice.)

[I]f GMOs ever deliver on their promise to improve food security, which they have yet to do in the more than 20 years since they were introduced, I’d be over the moon.

Get your space suit on, Tom.

According to an analysis by economists Graham Brookes and Peter Barfoot, in 2013 the direct global farm income benefit from crops improved with modern molecular genetic engineering techniques was $20.5 billion . That is equivalent to the addition of 7.6% to the value of global production of the top four crops: soybeans, maize, canola and cotton. Since 1996, farm incomes have increased by $133.5 billion.

Have you ever wondered, Tom, which farmers benefit most from genetically engineered crops? According to Brookes and Barfoot, “In terms of the division of the economic benefits obtained by farmers in developing countries relative to farmers in developed countries. . . in 2013, 49.9% of the farm income benefits have been earned by developing country farmers,” many of whom are resource-poor. They also found, “Over the eighteen years, 1996-2013, the cumulative farm income gain derived by developing country farmers was 51.2% ($68.31 billion),” which represents a significant gain in food security.

Colicchio’s World: “Consumers have a right to seek out food produced in accordance with their values, and not be misled by an industry’s strenuous efforts to keep them in the dark. When GMO ingredients are clearly labeled, consumers can exercise those rights.”

The real world: I’ve written about this so many times (for example, here,here and here) that I won’t repeat myself except to say that government-mandated labeling of genetically engineered foods fails every test–scientific, economic, legal and common sense.

And sorry, Tom, but there is no consumers’ “right” to such labeling, any more than I have a right to demand that you reveal your company’s financial figures on your restaurant menus. See this and this, for example.

At his craftsteak restaurant in Las Vegas, Tom charges $260 for an 8oz Japanese Wagyu New York Strip steak. (Yes, you read that right: That’s a main dish for one person.)

What a good thing that there are people like you, Tom, looking out for ordinary folks and the health of the planet, writing op-eds and leading the opposition to revolutionary technologies that can produce sustainable, low-cost, high-quality protein. Even if you don’t have a clue about science, or agriculture, or public policy, and you’re a self-congratulating, irredeemable, moronic Luddite, it’s great that you offer affordable, healthful food for the masses at your restaurants.