The representation of crop biotechnology in film has been an asymmetrical assault on science and reason. Food Evolution breaks that trend. The film tells several stories of biotech applications, where “GMO” crops are the centers of policy decisions. The film features scientists standing up for science and reason, and activists working hard against it, pushing to influence policy even if it means hurting people. Today’s podcast features two interviews. First Dr. Alison Van Eenennaam speaks of her role in the discussion and the film. Later, Director/Producer/Writer Scott Hamilton Kennedy and Producer/Writer Trace Sheehan speak about the mission of the film and some of the surprises along the way.

Most of all, this is not a film about GMOs. It is a film about how humans make decisions, ignore experts, and let belief guide their actions– even with horrible consequences to others. Narrated by Dr. Neil deGrasse Tyson.

To arrange a screening or to learn where it is playing near you: www.foodevolutionmovie.com 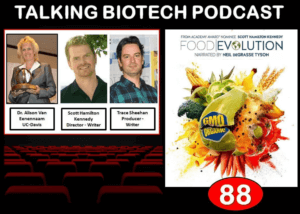 Podcast: Beyond CRISPR and gene therapy—How ‘gene writing’ is poised to transform the treatment of even the rarest diseases

Podcast: Can we harness the power of germline editing without inviting disaster?