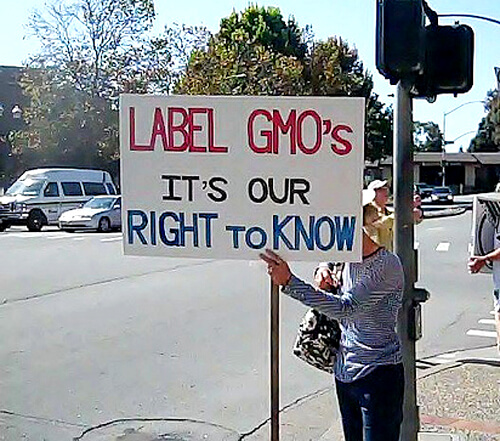 The latest polls suggest a neck and neck race in the final days of the vote over the California genetically engineered food labeling initiative. What’s not so close is how the media is framing reports on how each side is attempting to woo voters. We’re seeing lots of biased coverage.

The dominant narrative is that Big Food and Big Agriculture have been outspending the supposedly rag tag forces that support “consumer choice” on a last minute advertising blitz. Over the past week, from the Huffington Post to the Los Angeles Times, stories have appeared listing contributions by Monsanto, DuPont, Pepsi and the funding the opposition’s last minute television advertising blitz. A fierce Prop 37 supporter, Food Democracy Now, compiled those figures. Using highly ideological framing words, the Times reported that large corporations have contributed $42 million to an “opposition war chest.” These same stories note that contributions for the TV ad campaigns by Prop 37 supporters comes to a paltry $5+ million.

That’s a highly questionable, old media interpretation of the facts on the ground, however. While the advertising expenditures of Prop 37 opponents is public record, the forces aligned for the initiative are spending most of their resources—considerably more in total than being spent by Prop 37 opponents—on less trackable and arguably more effective web and social media campaigns, and by leveraging free media opportunities.

As Henry Miller and Jay Byrne note in an article posted in our NGO, Legal & Ethics Monitor” section, a review of tax returns of the “non-profit” activist organizations opposing agricultural biotechnology reveals more than $2.5 billion is being spent annually in the United States alone by professional advocacy NGOs to manipulate public opinion against conventional and biotech agriculture. A sizable chunk of that, reportedly hundreds of millions of dollars, has been poured into this campaign, which biotechnology opponents believe could be a precedent setting vote.

So, while anti-GM individuals and groups are spending some money on traditional television and radio advertising, they are getting far more bang for their sizable bucks by funding web-based campaigns that not only reach their targeted California audience but will resonate nationally well after the November vote.

Organic food companies, natural product makers and “quack” health product moguls like Joseph Mercola are the leading corporate and donor contributors supporting the California Right to Know/Yes on 37 coalition. Their allies in the media include pop show health doctor Mehmet Oz—he’s done numerous shows, worth tens of millions of dollars in free publicity, savaging GM foods and has endorsed the initiative—whose wife and co-producer of his program, Lisa Oz, has been a longtime supporter of Smith and an active campaigner against genetic engineering and in favor of Prop. 37.

As the State of California voter’s guide for this initiative notes, The US Food and Drug Administration believes the label being proposed would “be inherently misleading. It also notes, :Respected scientific and medical organizations have concluded that biotech foods are safe, including the National Academy of Sciences, the American Council on Science and Health, the Academy of Nutrition and Dietetics and the World Health Organization. It quotes the American Medical Association as stating in a June 2012 statement, “There is no scientific justification for special labeling of bioengineered foods.” The No on 37 effort lists dozens of Nobel Laureates who oppose the labeling law as bad science.

Unlike Prop 37 supporters, the mainstream health and science community has no easy access to hundreds of millions of dollars in free publicity. So why, in these crucial last days of the campaign, is the media missing the “money story”?

Jon Entine, executive director of the Genetic Literacy Project, is a senior fellow at the Center for Health & Risk Communication at George Mason University.