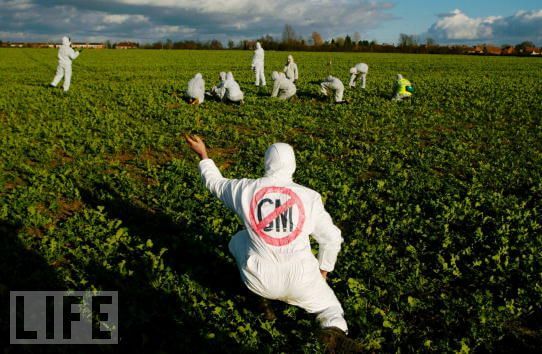 The reflections and recriminations over the rejection of California’s Proposition 37 is in full swing. The measure was soundly defeated, 57 percent to 43 percent. Support for the labeling initiative was strong at first, with popularity reaching 60 percent according to opinion polls, but collapsed over the course of the last month of the campaign.

To many on the left, the loss was directly attributable to the spending blitz and a campaign of “deception” by Monsanto and other “Big Food” companies opposed to the labeling of GM foods. Andrew Pollack, at The New York Times, offers an excellent breakdown of the raw facts, including the imbalance of campaign spending, around Prop 37′s defeat, but it’s hardly the whole story.

Mainstream scientists were by and large opposed to the measure, and are relieved at the outcome.  They point to the deceptive framing of the proposition as a referendum on a “right to know.” It sounds so justifiable and transparent: why shouldn’t people have a right to know if their food is genetically modified? What do Monsanto and Syngenta have to hide? But couching the issue in terms of knowledge assumes that labeling, at least as would have been mandated by Prop 37, would have been informative.

University of California biologist Michael Eisen framed the issue well on his blog: “This language reflects the belief of its backers that GMOs are intrinsically bad and deserve to be labeled – and avoided – en masse, no matter what modification they contain or towards what end they were produced. This is not a quest for knowledge—it is an attempt to reify ignorance.

Intriguingly, many left leaning journalists, who had long stayed out of the fray—taking an anti-GM stance had long been a litmus test of liberal fidelity—are celebrating the initiative’s defeat.  Andrew Revkin, in The New York Times’ Dot Earth blog, wrote he is “glad that the sloppy, unscientific and protectionist initiative failed, but glad an important discussion of transparency in food sourcing has begun.”

Will the anti-GM movement take the opportunity to genuinely reconsider both their science and their tactics? Early signs are mixed. Keith Kloor, at Slate, who has been a voice of sanity throughout the process, pulled no punches, attacking the proposition for its shaky scientific grounding (a common complaint) but calling it “politically stupid” as well.

Two of the most prominent foodies, writer Michael Pollan and the Times’ food writer Mark Bittman may not yet be ready to reconsider their positions. In an article last month for the New York Times Magazine, the writer Michael Pollan argued that passage of Prop 37 would “change the politics of food not just in California but nationally too,” proving that the foodies could exert real political as well as economic power.  He’s gone silent since.

Bittman’s coverage on the issue has been bizarre and clearly out of touch with both the science and public opinion. “It’s not an exaggeration to say that almost everyone wants to see the labeling of genetically engineered materials contained in their food products,” he wrote in a mid-September piece. After the vote, he abandoned one of the major anti-GM narratives, saying, “I think there is very little evidence that eating foods that contain GMOs is dangerous.” However, he continues to embrace the remaining myth—that GM crops are environmentally dangerous. “I think that they have done more damage to the environmental landscape than they have helped it,” he told California Public Radio in an interview.

Not all “progressives” remain so steadfast in their resistance to the science, however. Alexandra Le Tellier at the Los Angeles Times offered an excellent walk-through of how she, as a self-described “health-conscious foodie,” eventually sided against the initiative.

What’s next? Much like the über-conservative Tea Party Right, the hard core is not likely to soften its position. Grist issued a rallying cry to take the issue ‘to the people’ whatever that means. Isn’t that what just happened, and failed? Jason Mark at the Earth Island Journal offers a more considered road to redemption, calling the movement “half-baked” but also offering suggestions for how foodies might build the infrastructure they need to make a more persuasive case.