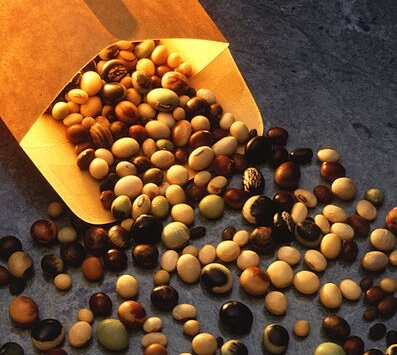 Anti-GMO campaigners and some farmers claim that Monsanto and other corporations use their deep pockets and unfair patent laws to abuse the “natural” rights of farmers to save new seeds produced during harvest. Similar charges have been leveled at Myriad Genetics, which is facing its own Supreme Court patent challenge in arguments scheduled for April.

What is the role of patents in farming, and in agricultural biotechnology in particular? Abraham Lincoln once described patents as “adding the fuel of interest to the fire of genius.” The current debate over crop GMO patents certainly tests that contention.

Biology Fortified, a website run by and for the new generation of independent-minded agricultural geneticists, recently hosted a discussion on Bowman v. Monsanto, wherein commenters raised the familiar patent allegation.

“Mlema” is echoing the anti-GMO lobby line. “Patenting of life forms must be prohibited in order to preserve biodiversity, food security and indigenous peoples’ rights and protect them from corporate grip on genetic resources,” declared a group of Green and Socialist parliamentarians last year. Andrew Kimbrell, director of the U.S.-based International Center for Technology Assessment, denounced biotechnology patents as “biocolonialism”—a favorite phrase of anti-GMO groups—and just a continuation of the “brutal history of oppression of colonialism.”

The co-editor of the Biology Fortified site, Anastasia Bodnar, a Presidential Management Fellow working at the National Institutes of Health, points out in her response that intellectual property protection for seeds has existed for a long time. “No matter what is decided from this case, farmers are and always have been free to breed and save their own seeds,” she wrote. “They haven’t always been free to obtain seeds developed by someone else and use them without permission or without paying for them. While the mechanism of IP for GM traits is different, little has changed for farmers.”

The Biofortified Blog previously addressed the gene patenting issue at some length, linking to an extensive collection of articles in 2007 by Iowa State bioethics professor Clark Wolf, director of the sustainable agriculture program and editor of ISU’s Bioethics in Brief. Wolf sketches out the history of patent rights as they apply to plants and biotechnology.

For example, Thomas Jefferson, who was no instinctive fan of restricting rights, nonetheless saw the wisdom of patent rights and in fact authored the first patent act in the United States. The goal of patents, he believed in a view endorsed by James Madison, is to provide a spur for creative innovation so that we can all gain benefits from technological advance. Although, according to Jefferson, intellectual property institutions and patents are not “natural rights,” Article 1, Section 8 of the U.S. Constitution specifically grants to the federal government the power to implement special protections for inventors and creators as a means “to promote the progress of Science and the Useful Arts.”

Clark notes in Part II of his series that one claim often made against patent protection for plants and other living organisms is that such patents facilitate what’s been called “BioPiracy,” which is understood as the theft of traditional knowledge by removing it from the commons. Numerous commentators, including Reason’s Ron Bailey, have argued persuasively against claims the patenting in the biotech field is a form of BioPiracy.

Bailey is not ‘all or nothing’ when it comes to crop-related patents. As he writes, “many experts acknowledge that many biotechnology patents are far too broad and vague and that the biotechnology patent system desperately needs refinement.” According to the seminal analysis on patents by Harvard University law professors Robert P. Merges and Richard R. Nelson, many biotechnology companies are using bacteria and other expression “vehicles” to produce and patent new/purified versions of naturally occurring proteins. “In these cases,” they wrote, “it can be argued that it is stretching the concept of inventing greatly to say that the patentee really invented the products. The true invention seems to be a way of producing those products in a desirable form. But because a product claim is typically broader than one simply on a particular way of making that product, patentees seek—and often obtain—product patents.” The potential for overreach, however, does not mean that the concept of biotechnology patents is necessarily wrong, which is what anti-GMO campaigners reflexively contend.

According to anti-GMO establishment, transnational corporations like Monsanto and Syngenta are in the business of stealing genes nurtured by innocent and often poor farmers. The greedy corporations allegedly do this by patenting valuable genes found in local varieties of plants grown by traditional farmers. Then the companies sell the patented genes back to the poor farmers from which they took them.

Bailey responds using examples from Genetics 2.0—the new generation of agricultural genetic innovation that focuses on enhancing the qualities of crops (e.g. nutrition additives or drought and disease resistance) rather than focusing on production efficiencies (such as Roundup Ready soybeans, the subject of the current SCOTUS case).

What actually happens is that researchers at companies like Monsanto and Bayer screen a wide variety of plants seeking genes for things like disease resistance or particular nutrients. Say, hypothetically that the researchers find a gene in a local variety of rice in India that prevents a fungal disease endemic to India. Delighted, the corporate researchers have the technology to put the anti-fungus gene into a high yielding, but fungus prone, wheat variety. Farmers in India would have liked to grow the high yield wheat, but didn’t do so because of its susceptibility to fungus. … [T]he hypothetical anti-fungus gene that is inaccessible to Indian farmers because they have no way to get it from rice into wheat where it would be really helpful to them. Thanks to biotechnology, Indian farmers can now choose to grow (or not grow) the high yield wheat without fear that their crop will be devastated by fungus.

“The anti-globalization activists get it almost exactly backward,” Bailey concludes. “Intellectual property rights, far from being harmful to the poor [or farmers in general], are in fact the foundation upon which many technologies that will help them rise from poverty to prosperity will be built.”

Related article:  You say potato, I say GMO: Are spuds the next battleground in the GMO debate?

Clark Wolf generally agrees, but he adds a caveat: patents should not allow their bearers to remove from the public domain what ought, by right, to be the common property of all. But the devil is in the details and Clark never delves into specific cases. The Biofortified blog points to another in depth ethical series, by Joe Miller, professor of law at Lewis and Clark Law School, addresses the ethical quandary in his recent three part series, hosted at Cooking Up a Story.

Miller begins his analysis by pointing out that “plant patents,” which protect new and inventive plant varieties, are one of three types of patents (“utility patents” protecting a “useful” invention and “design patents” are the other two).

As Miller notes, it can take an enormous amount of time and money to develop a new piece of information (like Roundup Ready soybeans), but very little to use the new information (Bowman planting it) after the heavy lifting phase. This disparity between the cost of developing and the ease of using new information may deter people from making the big up-front investment in developing new information in the first place unless they are rewarded. That’s the argument for crop patents.

Congress first considered expanding patent protection to include plants in 1892, but it did not enact the Plant Patent Act until 1930. Before the new law, Congress viewed plants– even newly invented varieties that would not exist but for human intervention– as unpatentable products of nature. According to the committee reports Congress prepared in support of the PPA, lawmakers realized that these past regulations stifled innovation. “A plant discovery resulting from cultivation is unique, isolated, and is not repeated by nature, nor can it be reproduced by nature unaided by man, and such discoveries can only be made available to the public by encouraging those who own the single specimen to reproduce it asexually and thus create an adequate supply,” the background study noted.

Under the PPA, a crop seed company could not stop others from saving crop seed and planting in the next season. However, because of advances in (costly) scientific research that resulted in new crop varietals, Congress recognized the need to update patent law in 1970 so corporations, which had invested tens of millions of dollars on research, could recoup their investments. It passed the Plant Variety Protection Act of 1970.

If the variety is “new, distinct, uniform, and stable,” the owner has the right “to exclude others from selling the variety, or offering it for sale, or reproducing it, or importing it, or exporting it, or using it in producing (as distinguished from developing) a hybrid or different variety therefrom.” However, the PVPA has limits. The PPVA does not bar a farmer from saving seed from one crop and planting it at a later time.

This was, mind you, the pre-genetic era. That leaves some questions not fully clarified—hence the ongoing SCOTUS case:

(1) Could one obtain a utility patent on a living organism, such as a genetically modified bacterium, or even a multicellular organism?

(2) Could one obtain a utility patent on a plant, even if the plant could also be covered by a PVPA certificate or a PPA plant patent?

The first question addressed by Diamond v. Chakrabarty in 1980, Miller notes. In a 5-4 decision, the Court concluded that whether something was a living organism or not is irrelevant in the eyes of the law; as long as something is an identifiable product of human ingenuity, it’s patentable. In the years since the case, the Patent Office has stated that it “consider[s] nonnaturally occurring, nonhuman multicellular living organisms, including animals, to be patentable.”

Bowman v. Monsanto will probably turn on the more arcane legal issues surrounding the second question posed above. Agricultural companies sought utility patents for their seeds rather than plant patents under the PVPA of 1970 (again, which were enacted before the use of GMOs). In fact, seed companies successfully obtained utility patents by showing the Patent Office that they could meet all the requirements for such protection.

When he wrote his analyses a few years ago, Miller posed the question: Where do these decisions leave us? The answer today is no different than the answer then. Much to the chagrin of anti-GMO, activists, according to SCOTUS, living things are patentable; and genetically modified bacteria, and even including higher life forms like genetically modified laboratory mice, are considered “manufactured” and therefore are patentable under the Patent Act.

As for the current case, based on the grilling by the Supremes in Bowman v. Monsanto and barring a spectacular change of heart, the anti-GMO activists don’t have a legal leg, let alone a moral one, to stand on.