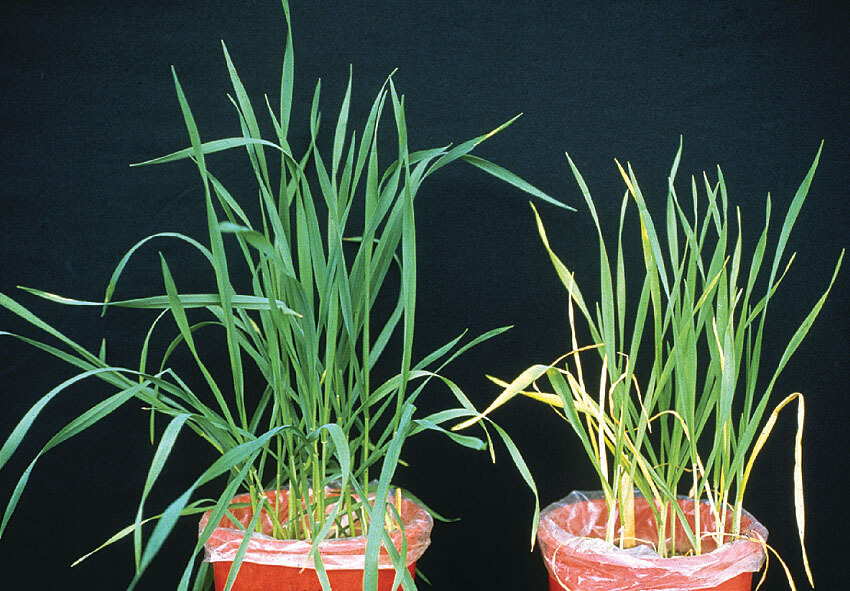 Picture yourself walking down the narrow lanes of a poplar plantation in Minnesota surrounded by the slender, fast-growing trees farmed around the globe to make everything from paper to plywood to biofuels. Consider the resources it takes to develop a plot like this, particularly nitrogen, one of the 13 mineral nutrients necessary for plant growth. All plants need nitrogen to grow, but poplars are particularly sensitive to nitrogen-deficient soils. One acre can easily use hundreds of pounds of nitrogen fertilizer to achieve maximum yield.

Enter Arcadia Biosciences, which recently teamed with FuturaGrene, a genetics firm specializing in forestry and biofuels to developed nitrogen use efficient (NUE) poplar and eucalyptus trees. In theory, the poplars they develop would need as much as 50% less nitrogen than their non-NUE counterparts. If a plant’s metabolism is an engine, then nitrogen is its fuel. Nitrogen-efficient plants have the potential to increase yields and reduce costs for farmers all while reducing environmental harm: a win-win-win.

Arcadia CEO and founder Eric Rey hopes to do for plants what the Prius has done for automobiles—accelerate our transition to more sustainable future. “We go after targets where we could use [biotechnology] as a tool to improve the environment,” he told me.

These hypothetical trees are the latest in a series of genetically engineered plants to come out of Arcadia, which in turn are part of a larger effort to develop nitrogen-efficient crops of all stripes. The acronym “NUE” applies broadly to any plant which is better at making use of the nitrogen in its environment, whether by taking it up earlier in the season, storing and using it later, or even through induced symbiosis with root bacteria. Though not necessarily achieved through genetic engineering (it’s possible, if not plausible, that conventional breeding could produce NUE plants), this is currently the most promising method to create NUE crops.

Nitrogen is the single most limiting nutrient for plants, which is why fertilizers are nitrogen-based, why about 15 million tons of fertilizer is created each year, and why fully 1% of the world’s annual energy supply is used to create fertilizer. All told, it’s a $60 billion dollar industry. Three scientific reviews, in 2007, 2010, and 2012, independently determined that improving plants’ nitrogen use through biotechnology is an important strategy for addressing the increasing costs, negative environmental impacts, and diminishing returns of nitrogen fertilization.

By the late 2000s, enthusiasm for nitrogen-efficient plants had spread from the biotechnology industry and into the mainstream. They were hailed just a few years ago by Nature as one of the harbingers of an “underground revolution” in agriculture. Some biotech enthusiasts, such as science writer Matt Ridley, held up NUE crops as the holy grail of green biotechnology:

“Imagine you could wave a magic wand and boost the yield of the world’s crops, cut their cost, use fewer-fossil fuels to grow them and reduce the pollution that results from farming. Imagine, too, that you could both eliminate some hunger and return some land to rain forest. This is the scale of the prize that many in the biotechnology industry now suddenly believe is within their grasp in 2010 and the years that follow.”

Here’s the rub: even in the best of circumstances, only about half of the nitrogen offered by fertilizers is taken up by a given crop.

This unused nitrogen causes two major environmental problems. First, nitrogen runs off into streams, rivers, and the ocean, where algae are perfectly happy to use the nitrogen infusion to fuel population explosions (blooms), choking out fish and other aquatic life by using up all the oxygen in the water. Second, the nitrogen is consumed by microbes in the soil and transformed into nitrous oxide (N2O), a greenhouse gas 300 times more potent than carbon dioxide.

Furthermore, our ability to boost yields with nitrogen fertilizers has plateaued, according to the 2012 review in the Plant Biotechnology Journal. There are limits to plants’ ability to metabolize nitrogen; we’ve gone as far as we can by dumping fertilizer on them.  So if you can’t give plants more nitrogen, what do you do?

You should improve the plant’s nitrogen metabolism, its ability to take up and make use of the element, said Allen Good, lead author of the review and director of the lab at the University of Alberta where the first successful genetic tweak for nitrogen efficiency was discovered in 1995.

Soon after Good’s team stumbled across a way to trick plants into over-expressing a gene from barley plants that ended up boosting canola’s ability to use nitrogen, Arcadia bought access to the genetics from Good’s lab and began experimenting. Some of Arcadia’s trials with canola needed 50% less nitrogen to produce the same yield; alternately, Arcadia has seen yield boosts in excess of 15% across multiple crops and trials.

Yet, there are no commercially available NUE crops. Why has it taken so long to commercialize this promising technology? The short answer is that the science just isn’t there yet.

Arcadia Biosciences is serving as a “nursery” for this technology, acting as something of a go-between for researchers, farmers, and other, larger biotechnology companies. According Rey, Arcadia picks the best agricultural biotechnologies and nurtures them. In other words, it finds promising independent research leads like Allen Good’s, buys the rights to work on them in-house, and then makes deals with other companies (like FuturaGene) to further develop and deploy these new crops.

NUE versions of corn, wheat, barley, soybeans, rice, cotton, alfalfa, and some trees have been licensed for development by Arcadia’s partners around the world. Their clients include SESVanderHave Seeds, DuPont, and Monsanto.

“I’ve walked those [experimental] fields and let me tell you … it was impressive!” Unlike other biotech, this is an effect you can see, he said. His reaction was echoed by reporter Elizabeth Svoboda, who visited one of Arcadia’s greenhouses and saw NUE rice beside its counterpart. “It’s like seeing Charlie Chaplin and Wilt Chamberlain side by side,” she wrote.

Yet Good, who is still trying to engineer NUE plants in his own lab, has become much more reserved than Rey in his outlook for nitrogen efficiency in plants. “There have not been any big developments in NUE technology in the real world,” despite the “huge surge of interest in this area and a surge of investment,” he told me.

NUE crops are notoriously difficult to work with, he noted. “You only see the [nitrogen efficient] phenotype some of the time; it works very well in some environments but not well in others. There’s a very strong genotype-environment interaction.” And with this sort of biotechnology, which requires major upfront investment, plants need to perform well in a wide variety of environments if they’re to be successful commercially.

At the moment, Good contends, most of the companies working on NUE plants are “slamming a gene in under a set of promoters,” essentially “throwing genes in left, right, and center” to see what sticks. There are a lot of wasted experiments, a few promising results, and these tend to fizzle or prove much more difficult to get working consistently in real-world settings than anticipated. “People are finding out how hard it is.”

As far as all the talk about a second green revolution, Good admitted to being “partners in crime” with Rey in hyping the new technology. Now, with the benefit of hindsight, Good believes the fundamental complexity of attempting to fiddle with a plant’s nitrogen metabolism will push the timeline for NUE plants back considerably past the already-gone predictions of 2010 by Ridley and others.

“If you look at the early success of genetic modification, they involve putting in a protein that has its own biological product, like a toxin,” something that can work without getting tangled up in the plants existing biology. “[But] a plant has an inherent metabolism,” when you try to improve nitrogen uptake and use, “you’re not adding something on top of the genetic architecture, you’re messing around with parts in an engine.”

Rey acknowledges the hurdles. Even with the promising early results, however, NUE crops have only made it into test fields “in the last two years,” he said. Yet he remains undaunted. “Our projection is that the first of the NUE crops will be on the market about 2017; things are going really well now.” And his reasons for championing the technology are no less compelling in light of NUE tech’s complexity.

He appreciates the skepticism that biotechnology companies and genetic engineering stir. “I get it, the idyllic idea of organic—for people who can afford it, it’s a really nice thing. [But] roughly a billion people suffer from food insecurity—340-350 million of whom are children. That’s like touring the U.S. and every person you see is a hungry child.” Improved yields from nitrogen-poor soils or plants which need less fertilizer (and are therefore cheaper to grow with less up-front investment) would help alleviate hunger.

Rey is fond of using a metaphor to characterize the environmental promise of NUE: If you could manage a 50% reduction in nitrogen emissions from agriculture would be equivalent to taking all the cars in the US, UK, and France off the roads. NUE plants represent a truly green technology, he argues. “One of the prerequisites of sustainability is economic opportunity. If there’s not economic opportunity, it’s not going to work.”

NUE technology, in theory, has economic appeal in spades, so much so that Rey is considering plans where people using Arcadia’s NUE crops wouldn’t even need to “pay” in a traditional sense. He envisions a world where there are nitrogen credits that function like some of today’s carbon credit systems, and Arcadia would essentially sell nitrogen-efficient crops in exchange for the credits farmers could garnish by using them.

Despite his tempered enthusiasm, Good doesn’t necessarily want anyone to abandon the search for this holy grail of biotechnology, even if it’s a bit farther away than previously thought. His own lab is still working on it. Early predictions of a 50% decrease in the needed fertilizer for the world’s crops might be impossible, but incremental improvements are within reach. “Suppose you can improve it by only 5%?” mused Good. The economic value would still be so staggering as to make nitrogen-efficient crops a worthy investment.

Kenrick Vezina is an editor for the Genetic Literacy Project and freelance science and nature writer.