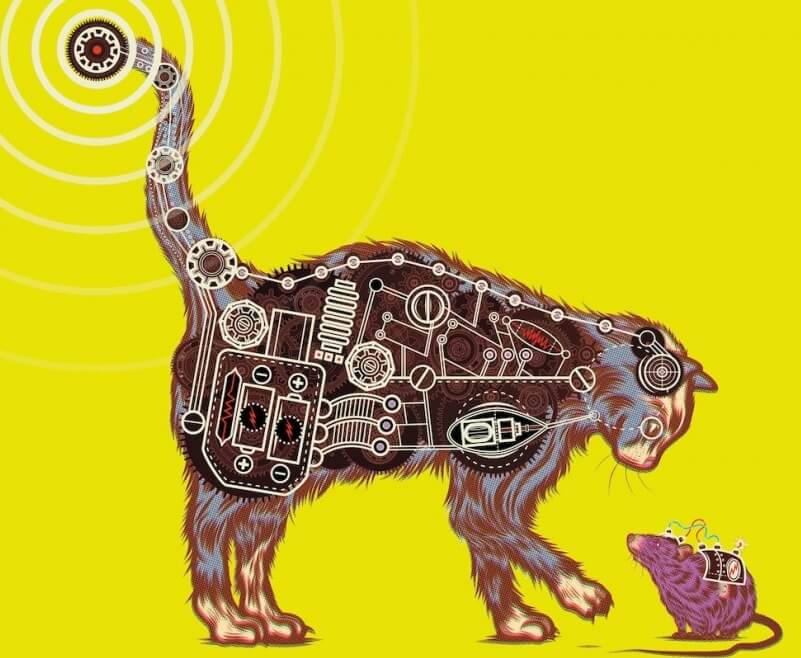 Is transhumanism—the possibility of enhancing human intellectual, physical and psychological capacities through biotechnology —a brave new world that we should welcome with open arms? Is it, as science writer Ron Bailey has contended, a “movement that epitomizes the most daring, courageous, imaginative, and idealistic aspirations of humanity”? Or is it one of the ‘world’s most dangerous ideas’, as conservatives such as Francis Fukuyama or über liberal organizations like the Council for Responsible Genetics and the Center for Genetics and Society  would have it?

Dr. Frankenstein’s creation is the metaphor for transhumanism gone bad. The children’s book writer Curtis Jobling toyed with the theme in his 2001 children’s book, Frankenstein’s Cat, in which he imagined a kind of prequel to Mary Shelley’s masterpiece: the mad scientist’s first creation, a cat he named Nine—not because cats have “nine lives,” but because that’s how many cats it took to make him.

Now science writer Emily Anthes has moved from fiction to fact with the publication of Frankenstein’s Cat: Cuddling Up to Biotech’s Brave New Beasts. It’s an animated review of the many ways in which biotechnologists have altered some of the non-human cohabitants of our planet. But it’s far more than just a fascinating read about animal manipulation. As it touches the third rail of “manipulating Nature,” which seems to irritate non-religious liberals as much as evangelicals, its implications go far beyond controversies associated with animal biotechnology to the ethics of “positive eugenics” in humans.

Anthes’s Frankenstein’s Cat colorfully explores all the fascinating and in some cases gruesome ways humans are reshaping the animal kingdom. She discusses how genetic engineering could help rescue endangered species from extinction or create new animals—from sensor-wearing seals, cyborg beetles, a bionic bulldog and (get this, Mary Shelley) the world’s first cloned cat.

The modifications are linked to the possibility of doing genuine good for the world. Citing just one of her many examples, scientists at Cambridge University and Scotland’s Roslin Institute—the facility that created Dolly, the cloned sheep, in 1996—have developed chickens that can’t spread avian flu to others in their flock, opening up the possibility of developing flu resistant animals. “Given how hard it is to develop vaccines to combat the rapidly evolving flu virus, this genetic modification could end up saving the lives of many birds, and perhaps humans,” she writes.

The raging debate over the ethics of animal enhancement or transanimalism foreshadows the emerging public discussion over manipulating humans. It’s understandable if these new technologies stir concern. The idea of humanity entering into an advanced state of biological existence while leaving behind the rest of nature can be disconcerting, Anthes suggests. But she thoughtfully pleas for reasoned contemplation and discussion rather than knee jerk reactions.

“Humans are a force of nature—we are, in some senses, the force of nature—and we influence animals whether we intend to or not,” she writes. “So the real question, going forward, is not whether we should shape animals’ bodies and lives, but how we should do so—with what tools, under what circumstances, and to what end. Are the needs of other species truly best served by leaving them to fend for themselves in a world that we have come to dominate?”

Anthes often stresses that genetic engineering itself isn’t “good” or “bad”; rather, it’s how we use it. As she noted in a recent New York Times article on the debate over genetically modified salmon, “We shouldn’t let political calculations or unfounded fears keep these products off the market. If we do that, we’ll be closing the door on innovations that could help us face the public health and environmental threats of the future, saving countless animals—and perhaps ourselves.”

Enhancement biotechnologies have the potential to profoundly impact human and animal life as we know it. We are on the cusp of developing enhancements leading to health and wellness, improved longevity, increased intelligence and memory, improved psychological control, and many other novel capacities. We’ve already witnessed some promising pioneering transhumanism success stories,  such as advances in synthetic biology and mitochondrial replacement techniques designed to avoid the transmission of debilitating or fatal genetic diseases, which, if approved, would be the first instance of regulatory approval for modification of the human germ line.

Enhancement offers an unprecedented opportunity to transcend biological limitations, both for us and for the animals we share our lives with—if executed thoughtfully. These benefits include not just what might be gained, but also what could be discarded.

We may actually be compelled, ethically, to move forward with animal enhancements, writes George Dvorsky, the Canadian futurist and chairman at the Institute for Ethics and Emerging Technologies. We should be actively debating “whether or not we are morally obligated to biologically enhance nonhuman animals and integrate them into human and posthuman society. … The suggestion that posthumans will live amongst post-apes and post-elephants misses the point that a convergence of intelligences awaits us in our future.”

Thank you, Emily, for stirring the pot. Let the public discussion continue.