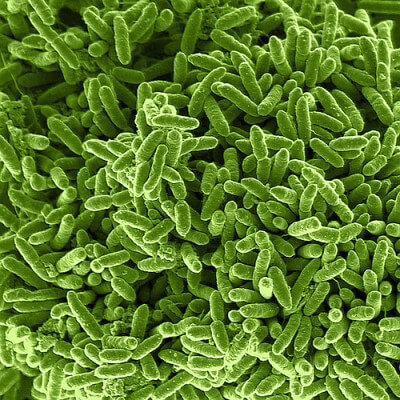 Bacteria and other microbes fill a mind-boggling number of roles on our planet, everything from turning carbon dioxide into oxygen via photosynthesis to helping animals (including us) digest food. Now imagine we could co-opt these microbes into working for us? It’s not unprecedented—we use yeasts to turn the carbohydrates in our beer into carbon dioxide and alcohol through fermentation. Although the potential of bacteria for human benefit is largely untapped, recent advances in synthetic biology point to a future where microbes could be workhorses for humanity.

Consider global warming: although scientists may agree that it’s a problem, proposed solutions vary wildly. Microbes are a key player in this problem as they absorb and release more carbon dioxide than all of the plants on the planet combined. Could they provide a solution?

Researchers at the University of Georgia recently made headlines for genetically engineering an extremophile bacteria, Pyrococcus furiosus, to digest carbon dioxide. Their research is actually something of a synthetic biology hat trick: it took three major changes to this microbe — which usually favors super-heated environments like volcanic marine mud at around 100 degrees Celsius — to (1) change its diet from carbohydrates to carbon dioxide; (2) survive in cool waters; and (3) produce 3-hydroxypropionic acid, a common chemical in household products. The scientists hope to eventually get the microorganisms to produce fuel, thus reducing atmospheric carbon dioxide while providing more of the energy we need. This remains an unsolved challenge, though, and the step after that — scaling the process up to industrial size — is no trivial matter.

Now, for the first time, scientists have created guidelines, based on experiments with hundreds of commonly used biological components, for their peers to follow in the assembly of novel microorganisms. As New Scientist’s Douglas Heaven puts it: “Libraries of these standardised high-quality parts will let engineers pick components knowing how they will behave.” This solves the problem of predictability that has kept synthetic biologists from doing more than producing one-off custom creations in the lab.

Imagine a biosynthetic hardware store, where researchers can cherry-pick exactly the correct parts to build whatever they’d like. Just as there are a million and a half different types of screws, there are untold numbers of microbes with untold biochemical tricks. The dream of synthetic biology proponents is not simply to break life down into its component parts and rebuild it, but to do so with a level of reliability that makes it a viable tool for tackling everything from disease (via specially engineering viruses that attack only specific bacteria, for instance) to oil spill clean-up.

One thing is for sure: biology is undergoing developments that parallel the industrial revolution, says Richard Kitney at Imperial College London. Only recently, for example, it might have taken 10 bioengineers more than 10 years to build something that produced a single drug. This is akin to the cottage industries of the 18th century in the UK, Kitney says, where master craftsmen like George Hepplewhite would labour to create one-off pieces of furniture.

“But we went from Hepplewhite to Ikea,” he says. “That’s what we’re trying to achieve in synthetic biology.”

Kenrick Vezina is an editor for the Genetic Literacy Project and a freelance science writer, educator, and amateur naturalist based on the Greater Boston Area.