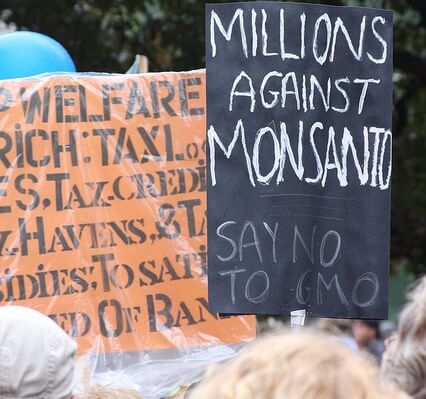 For years, activists who otherwise virulently oppose agricultural biotechnology have been calling for an open-source approach to creating genetically modified crops. Michael Pollan, one of the most vocal critics of bioengineering, also positions himself as a leading evangelist of ag biotech open-sourcing. “The real key to genetic engineering is control of intellectual property of the food crops that we depend on,” he said in a 2009 speech that went viral.

The discussion revolves around the controversial issue of patent rights in the biotech field—the subject of two current Supreme Court cases, Bowman v. Monsanto and Assoc. for Molecular Pathology v. Myriad Genetics. The biotech industry and the federal courts, at least so far, see patent rights as necessary to ensure innovation in a capital-intensive field; critics, mostly on the left, believe the current system damages the commons.

“No one wants to see a few major companies in charge of the world’s food supply, yet that is increasingly the case as farming becomes more industrialized,” Forbes blogger Steven Kotler and Autodesk researcher Andrew Hessel recently wrote. “Who owns seeds, GE or natural, who owns patents on traits or core technologies, and who can get access to these resources and tools are real and growing concerns.”

Open-sourcing is now being advanced as a possible middle ground. Open-source means that a product or platform is made freely available for users to modify, so long as the modifier makes his improvements freely available as well. In computer science, open-source platforms have led to the development of many successful programs, including OpenOffice, Firefox and the Android operating system.

Does the analogy hold for agriculture? At the moment the farm biotechnology business model would seem to be the antithesis to open-source. Writing new software code is relatively inexpensive when compared to creating a new genetically modified plant or animal. Rather than months, genetic modification can take decades; instead of thousands of dollars it takes millions of dollars. These factors go at least part of the way toward explaining why larger corporations, who have the capital and persistence to make long-term bets in a dicey marketplace, control 80 percent of GM plant patents.

Corporations like Monsanto take an extremely aggressive stance on protecting their investment and patents. A company’s intellectual property rights can limit researchers’ use of genetic engineering tools, impede new developments, and limit who can plant GM seeds.  Activists such as Pollan argue that these policies make the system “brittle” and “unsustainable”. They say open-sourcing would increase transparency and agricultural biodiversity, as well as find innovative solutions for problems that haven’t been profitable for Monsanto et al. to pursue.

There have been some successes in the world of open-source biotech—including the Transbacter and GUSPlus methods for making transgenic plants—but so far nothing has really taken off the way open-source software has.

That’s why it was surprising to read about Kotler and Hessel touting a new (as of January 2013) initiative by Syngenta, which will license out its cultivars and genetic engineering technologies to breeders and researchers. The idea is that smaller businesses could pay a fee to gain access to Syngenta products, to create add-ons and tailor the technology to local environments. Although the initiative doesn’t meet a strict definition of “open-source”, the company says it will make the licensing process quick and easy and low-cost, and free for research institutions and non-profits. “All academic and non-profit organizations can make free use of the available traits and technologies for R&D purposes,” the press release states, “and can distribute the resulting products in developing countries free of charge.”

Related article:  Modern food technologies let us choose to spend time in the kitchen, or not to

It’s an interesting business move, one that frames Syngenta as the anti-Monsanto, Kotler and Hessel suggest. Without knowing the specific terms of the contract, it seems like a step in a positive direction. Syngenta has taken other open-source-like initiatives in the past. It spent boatloads of money in partnership with Myriad Genetics to sequence the rice genome. Working in close cooperation with the non-profit International Rice Research Institute, the company has announced it is not enforcing its international property rights for non-commercial uses in less developed countries. That’s not quite “open-source”, but it’s similar to a lot of what passes for ‘open source’ in the digital realm. For example, Google allows anyone to use the Android code for free, but the software that someone creates with the code is copyrighted, and that copyright remains under Google’s control—much like the rice genome patent.

Some people, including The Guardian’s environmental editor, John Vidal (an opponent of agricultural biotechnology), think that Americans and Europeans would be more inclined to trust GM technology that hasn’t been developed in the R&D department of a large corporation. Sadly, that hasn’t been the case in the past, thanks to protestors who oppose GMOs of all kinds. Take for example Golden Rice, a variety that’s been engineered to produce beta carotene to fight malnutrition and blindness.  It was developed by a consortium of scientists and government agencies around the world (later including Syngenta, which developed Golden Rice 2). The corporations and scientists who donated millions of dollars of their time and effort have made the varieties freely available for humanitarian purposes in developing countries. Golden Rice has been proven safe and may soon be planted in the Philippines, but the group has had to battle anti-GMO activists and skeptics, including Pollan, every step of the way for more than a decade.

The gut reaction against genetically engineered crops—and the fear induced by Vidal and groups like Greenpeace and Friends of Earth—has made open-source biotech impracticable.  As Lawyer Drew Kershen and policy expert Henry Miller write, one of the main barriers to open-source biotechnology is “the strangulation of agricultural biotechnology by unscientific, unneeded, and discriminatory regulations.” Miller and Kershen provide a variety of examples where unwarranted fears have prevented open-source/non-profit GM crops from helping out during humanitarian crises.

To get a genetically modified food approved in the U.S. requires lots of money, a team of lawyers, and endless patience. AquaBounty first submitted its genetically engineered salmon for FDA approval in 1995. Now, 17 years later, the fish is finally on its way to approval—but even that was only because Genetic Literacy Project’s investigative reporting revealed that the White House was blocking the approval process. After the fish passed safety and environmental assessments, the approval was delayed even further when the FDA announced in February that it would extend the period for public comment. After seventeen years of research, activists still insist that the fish hasn’t been proven to be safe.

Such regulatory hurdles ensure that only the biggest companies can afford to get their genetically engineered crops approved. Intentionally or not, anti-GM advocacy contradicts itself: By seeding unscientific fears of GM food, activists guarantee that the power to engineer our food remains almost exclusively in the hands of large corporations.