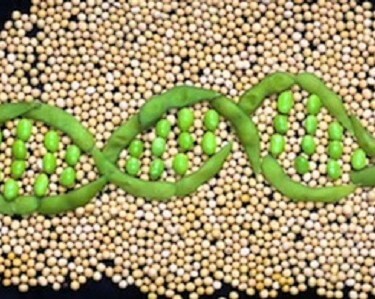 The Supreme Court is hearing arguments this week that could upend the biotech industry and DNA patent law, and have broad impact on biotech research. The legal echoes could have ramifications far beyond genetics.

Bowman vs. Monsanto is the long-anticipated square off between a 75-year old Indiana soybean farmer and the world’s largest agricultural biotechnology firm. The decision will turn on the minutiae of patent law, but the implications will extend to all cutting-edge technologies.

Monsanto has invested hundreds of millions of dollars developing the world’s top selling genetically modified seed and was granted patent protection for its investment. The seeds are engineered to require the use of less weed killers than used by conventional farmers, who use chemical sprays that can damage crops and reduce yields. It is specifically modified to be used with glyphosate, marketed by Monsanto as Roundup, an herbicide considered less harmful to crops, less environmentally harmful than the range of pesticides used in conventional farming and toxicologically benign.

According to farmers and scientists, the GM seed-glyphosate package is a unique product, far better than conventional soy seeds. The Supreme Court brief filed by Monsanto notes that more than 90 percent of the U.S. soybean crop now begins with Monsanto’s Roundup Ready seeds.

Here’s the rub: Every soybean plant produces enough seeds to grow approximately 80 more plants. Because of Monsanto’s huge investment in developing its Roundup seed, the biotech firm has insisted that farmers who want to use the technology sign licensing agreements that limit their use to a single season. Applying prevailing patent law, Monsanto also forbids farmers from planting second-generation seeds harvested from first-generation crops.

Bowman v Monsanto revolves around what Indiana farmer Hugh Bowman contends is a legal loophole in his license agreement with Monsanto: farmers are allowed to sell the second-generation seeds to grain elevators, which, in turn, are permitted to sell a mixture of undifferentiated seeds as “commodity grain.” In other words, he maintains he is legally allowed to buy Monsanto’s seeds cheaper from a grain elevator rather than directly from the company. Monsanto holds that commodity grain is restricted for use as feed, not cultivation, and its use, even as a second year commodity purchase violates the one-time use license agreement.

Bowman purchased Roundup Ready seeds for one year. The next season, Bowman cleverly (as anti-Monsanto and anti-GMO activists would have it) or deviously (as Monsanto, the biotechnology industry, the US government, many universities and most patent experts believe) recognized that the commodity soy bean seeds sold by local grain elevators probably contained mostly Roundup Ready seeds. He guessed he could save a bundle at Monsanto’s expense by discontinuing buying the Monsanto version and instead purchasing far less expensive local commodity seeds.

When Bowman treated his second crop with herbicide, he was proved right—most of the plants were resistant. He had effectively circumvented the license restrictions. Monsanto sued him for infringing its Roundup Ready patents by using, without authorization, second-generation seeds embedded with its technology. Monsanto contends that if Bowman prevails in this case, farmers could save seeds from one year’s crop to plant the following year, decimating its hard-earned patent rights.

Activists claim Bowman was acting ethically, saying that Monsanto’s restrictions hurt farmers, cause higher food prices and, according to one friend-of-the-court brief, contribute to “the suffocation of independent scientific inquiry into transgenic crops.” Whether those assertions are true or not—most independent analysts believe such characterizations are hyperbolic or just plain wrong—the case will turn on patent law. In other words, was Bowman acting legally?

The farmer argued that under the doctrine of patent exhaustion (interpreted most recently by SCOTUS in Quanta Computer v. LG Electronics), in using second-generation seeds, the farmer was merely reselling a patented product he’d already paid for. Indiana U.S. District Court disagreed, granting summary judgment to Monsanto, awarding the company $85,000 in damages. The Federal Circuit Court of Appeals, which had already twice upheld Monsanto’s right to bar farmers from planting second-generation seeds, also sided with Monsanto, finding the company’s patent rights were not exhausted in the first-generation harvest. Even if patent exhaustion did apply, the appeals court additionally held, Bowman infringed anew by growing a crop that that included Monsanto’s patented technology, effectively eviscerating Monsanto’s rights as a patent holder.

The Supreme Court had declined to review those two previous Federal Circuit decisions, but the justices granted Bowman’s cert petition. His lawyers then filed a merits brief, asserting that the Federal Circuit’s ignored Supreme Court precedent set in 2008 by the Quanta computer v LG Electronics decision, which the farmer claimed dictates that patent rights are exhausted after the authorized sale of a patented product.

Monsanto counters that the issue is a patent holder’s right to impose restrictions on the use of its technology, which extends to unauthorized copies of patented products. Monsanto’s brief warns that if the justices adopt Bowman’s position (as Monsanto articulates it) that “patent law treats as per se unenforceable all restrictions imposed by license on the use of a patented article following an authorized sale,” the biotech industry will be devastated.

The U.S. government has sided with Monsanto. In an amicus brief, it argued that Bowman was misinterpreting the doctrine of patent exhaustion. “Under longstanding principles of patent exhaustion, an initial authorized sale of an article embodying the patented invention exhausts the patentee’s exclusive rights to control the use and sale of that article,” the DOJ maintained. “It does not, however, exhaust the patentee’s right to exclude others from making a new article embodying the same patented invention. Accordingly, even if respondent’s patent rights in the commodity seed had been exhausted, petitioner acquired no right to use that seed to make newly infringing seed.”

Legal precedents may drive SCOTUS but the real issue hanging in the balance is the relationship of patents to innovation. Every invention and new creative work eventually becomes “public property” when patents expire. In fact, Monsanto’s last patent on the soybeans Bowman used will expire next year.  What would be the effect if anyone can break patent protections because they find a technical loophole in the law? askss Robert Atkinson, president of the nonpartisan Information Technology and Innovation Foundation. “When one free rider skims off the top, everyone else ends up paying more, and innovators get less to invest in the next round of innovation,” he writes.

Bowman’s case has been taken up by the usual array of “public interest” groups, many of which are openly hostile to business and would be thrilled to see the biotech industry and especially Monsanto—its icon of evil—gutted or at least put on the defensive. Patents have “given seed companies enormous power, and its come at the detriment of farmers,” claims Bill Feese of the anti-GMO Center for Food Safety. Citing 140 lawsuits filed by Monsanto to protect its patent, CFS portrays the company as a bully.

The amicus brief filed by soybean, corn and wheat farmer associations illustrates the industry view of the role that patents have played in agricultural innovation. From 1836 to 1924, the Department of Agriculture and its predecessors provided free seeds to farmers. While well intentioned, rather than producing a world freed from the tyranny of patents as envisioned (the argument offered again today by Bowman and his supporters)the impact on farm production proved disastrous. Average national yield for corn production decreased from 24.3 to 20.5 bushels per acre between 1866 and 1930, according to the growers brief:

Although soybeans and other crops have been cultivated for centuries, advances in plant genetics were historically stifled by a lack of incentives to invest in new technologies and breeding techniques. Genetic innovation in soybeans grew exponentially, like Jack’s magical beanstalk, after this Court’s 1980 decision in Diamond v. Chakrabarty … which confirmed the applicability of utility patent protection to qualifying organisms. No other country possesses the United States’ prolific record in developing new crop varieties. Without the protection of intellectual property afforded by the U.S. legal system, seed and biotechnology companies would not have undertaken the expensive and time-consuming research necessary to improve plant technology.

The impact of the SCOTUS decision will extend far beyond the biotech industry. As Monsanto noted in its brief “Investors are unlikely to make such investments (in biotech companies) if they cannot prevent purchasers of living organisms containing their invention from using them to produce unlimited copies.’ Live vaccine development, stem cell research, nanotechnology or DNA used for medical treatments might all be impacted adversely. That’s why many universities and laboratory instrument makers, among many groups concerned that a decision for Bowman could devastate incentives for research, have joined with the federal government in siding with Monsanto’s position

Intellectual property increasingly drives international economic competition. With this decision, expected in late spring or early summer, SCOTUS will have a lot to say about how the U.S. thinks about innovation going forward.

Jon Entine is executive director of the Genetic Literacy Project and a senior fellow at the Center for Health & Risk Communication and the Statistical Assessment Service (STATS) at George Mason University.